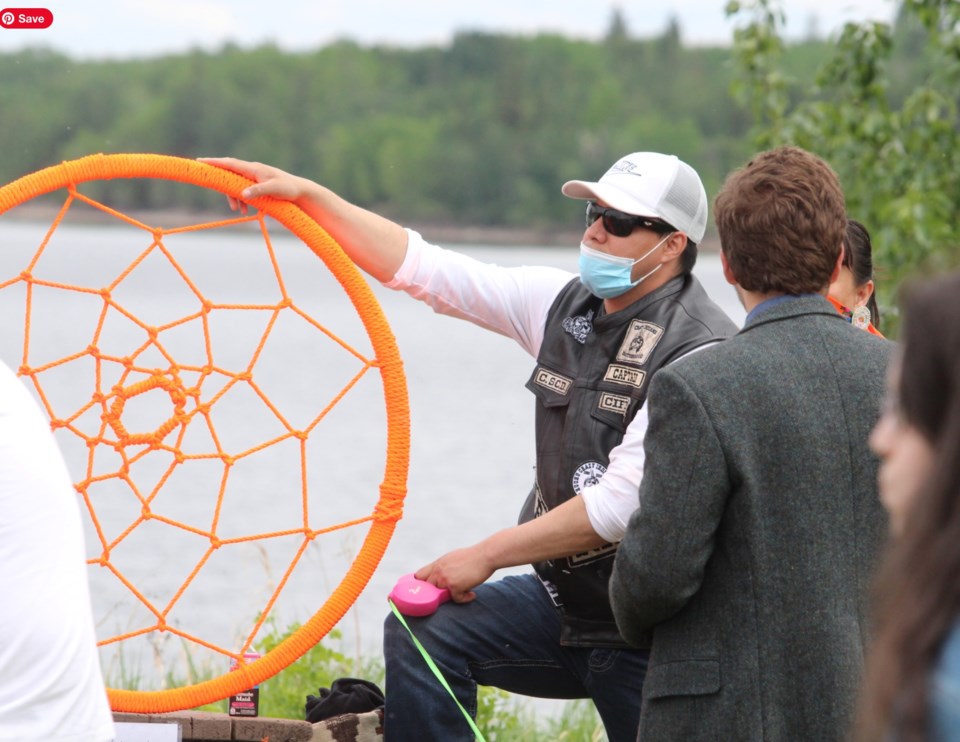 A friend of dreamcatcher creator Shelley Ann Cardinal holds up the bright orange creation at a recent tribute event at the Lac La Biche Mission historic site. The dreamcatcher will soon be gifted to a growing tribute for the Kamloops Indian Residential School survivors.Rob McKinley

LAC LA BICHE - Shelley Anne Cardinal brought a very noticeable offering to the recent tribute at the Lac La Biche Mission that honoured the 215 children found in graves at the site of a former residential school in Kamloops, BC. The Buffalo Lake local artist created a three-foot diameter, bright orange dreamcatcher in honour of the 215 children and all the victims and survivors of Canada’s residential school system.

When Cardinal heard about the discovery of the children’s remains, her traditional and maternal instincts directed her to create the meaningful piece.

“I made the dreamcatcher because when I heard about the 215 children at the residential school I was at work, I jumped out and put out my tobacco, so when I got home I just felt the need to make it,” said Cardinal, whose artistic and traditional talents have also recently been seen in a beaded eagle feather she created for an RCMP ceremony in Boyle, as well as a dreamcatcher situated at the Buffalo Lake cemetery

In 2017, Cardinal went to the Standing Rock Sioux reservation in North Dakota to create and presented a dreamcatcher at an Indigenous protest over a proposed pipeline.

The bright-orange dreamcatcher she created and displayed at the recent event at the Mission will be taken the Kamloops and placed with hundreds of other tribute pieces that now cover the site of the discovery. While Cardinal won’t be able to make the trip herself, she has two friends who will present the dreamcatcher for her as they sing traditional songs of healing.

“I knew I couldn’t travel with my friends so I made it and painted it orange so they could deliver it there. It was like I’m with them by heart,” she said.

The Kamloops Residential School officially closed in 1978. It operated as a residential school from 1893 until 1969.

Future of Métis National Council uncertain as Manitoba Federation gets mandate to pull out
Jul 26, 2021 9:45 AM