FOOTHILLS: The rise of the staycation

“What COVID has done is it has localized everything."
May 20, 2021 9:30 AM By: Anna Smith
Previous Next
Sarah Kilby, proprietor of Windflower Bed and Breakfast, in front of her B&B on April 21. Windflower is located 4 kilometres west of Turner Valley on Highway 546. (Brent Calver Photo)
Expand

BE IT EVER so humble, there is no place like home – or close to home.

The Foothills area offers a variety of opportunities to visit for the day, or possibly, stay for the night. With travel outside the area at a minimum, the pandemic has given rise to a renewed emphasis on the myriad of activities and places to visit right here in the Foothills to quench the wanderlust of anyone looking for memorable experiences.

Spirit Hills Winery invites visitors to live extraordinarily. Located just west of the Cowboy Trail near Millarville, the Bonjean family has been creating unique flower wine from Alberta’s local wildflowers for eight years, and offer tours to share the process with tourists and locals alike.

“We more or less live off the land,” said Hugo Bonjean, president of Spirit Hills. “So, we grow our own food, and the bees became an extension of that, they helped in pollination. Then we had all that dehydrated flower nectar, which in essence, is what honey is, so we rehydrated it and started fermenting it and turned it into beautiful wines.”

Bonjean comes from a long line of French winemakers, and said he originally wanted to prove that local ingredients from Alberta could produce high-quality wines, which are now sold and appreciated around the world. 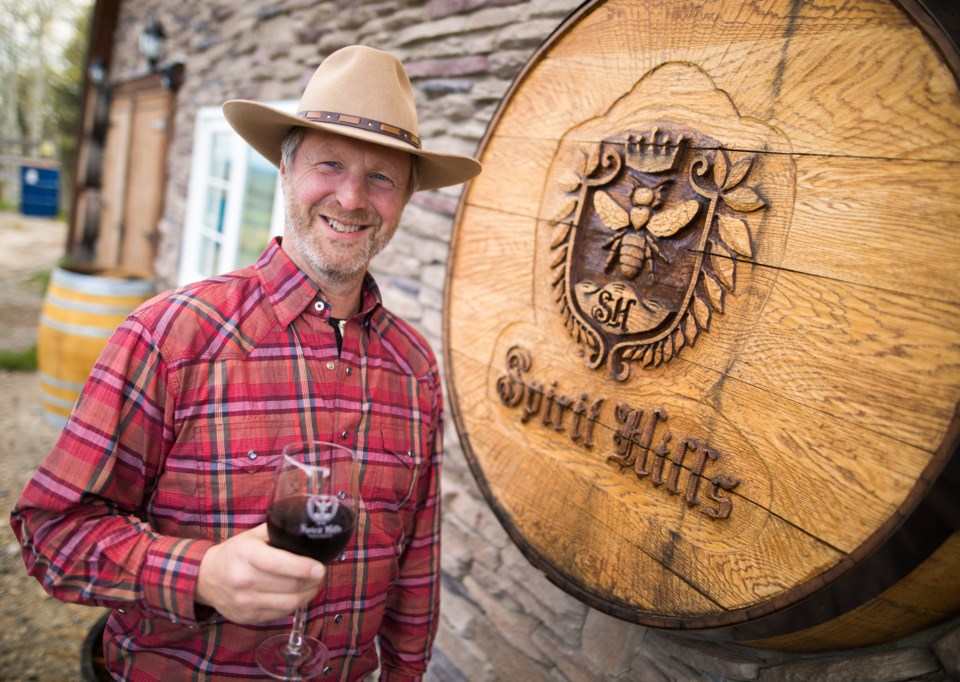 “It’s really the flowers that are critical. It’s just like when it comes down to grapevine, you don’t talk about the grape sugar, you talk about the grapes. And it makes all the difference in the world, which kind of flowers are the source of the nectar,” he added.

A tour of the winery is about an hour and a half in duration, and includes an in-depth explanation of the production process, from how the bees collect from local wildflowers to the infusion of flower petals into the wine, as well as a tasting.

“What COVID has done is it has localized everything and so it is a great opportunity these days for Albertans who haven’t discovered our beautiful flower wines,” he said.

Bonjean recommends visitors bring good smiles, and good company when visiting their scenic grounds. Booking can be done online at spirithillswinery.com. Booking availability may change due to COVID-19 restrictions. 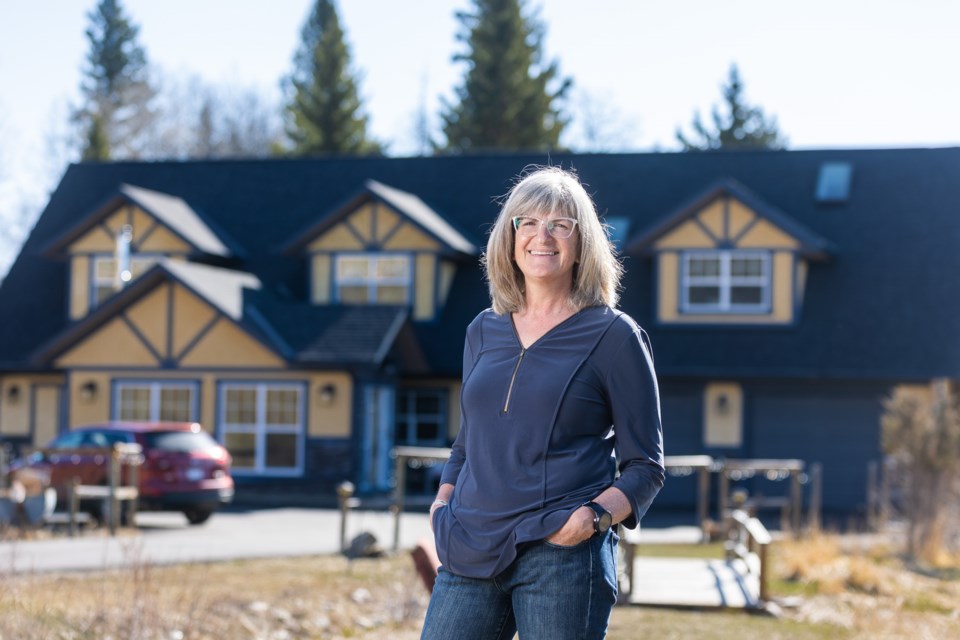 Sarah Kilby, proprietor of Windflower Bed and Breakfast, in front of her B&B on April 21. Windflower is located four kilometres west of Turner Valley on Highway 546. (Brent Calver Photo)

Run by Sarah Kilby and her husband Travis Allan since 2013, the Windflower is a mere four kilometres west of Turner Valley.

The seven-and-a-half-acre property is very peaceful and quiet, said Kilby, with numerous walking and hiking trails, and even a stream that runs through the area.

“We’re also pretty close to Black Diamond and Turner Valley for dining and shopping and that small-town experience but we’re in the country so it’s peaceful,” said Kilby.

The Windflower is also close to other attractions such as Anchor D Outfitting, and the Millarville Farmers’ Market in the summer, which Kilby called the best market around.

The Windflower is incredibly environmentally conscious, said Kilby, with 50 per cent of the house’s power provided by solar panels on the property and heat provided by an efficient wood-burning stove.

“We also offer a two course, made from scratch, breakfast. A lot of times we have things that we serve that are from the garden. And if we can’t get it from the garden, we resource everything as much as possible locally,” said Kilby. “Whatever’s in season, I try to incorporate into the breakfast. We grow lots of vegetables and we also have berries, we have an apple tree, we have saskatoons, raspberries, current bushes.

Even winter guests can enjoy the produce provided by the garden, as Windflower freezes fruits and vegetables from the autumn season for use throughout the year, said Kilby.

“My husband is a woodworker, so a lot of the furniture in the house is made by him. We try to have a really homey feel here, so people can feel like it’s a nice home away from home and that it’s a very relaxing atmosphere,” said Kilby.

The Windflower Bed and Breakfast is pet friendly with two resident dogs living in the house, as well as a spacious and well-lit crafting room that can be used for any projects guests may have.

“We have a very large deck if you come in the summer, that allows for multiple people to be sitting out, quite comfortably, be that together or apart,” said Kilby. “We also have Wi-Fi. Just bring yourselves and a change of clothes. “And a good pair of hiking boots, probably.” 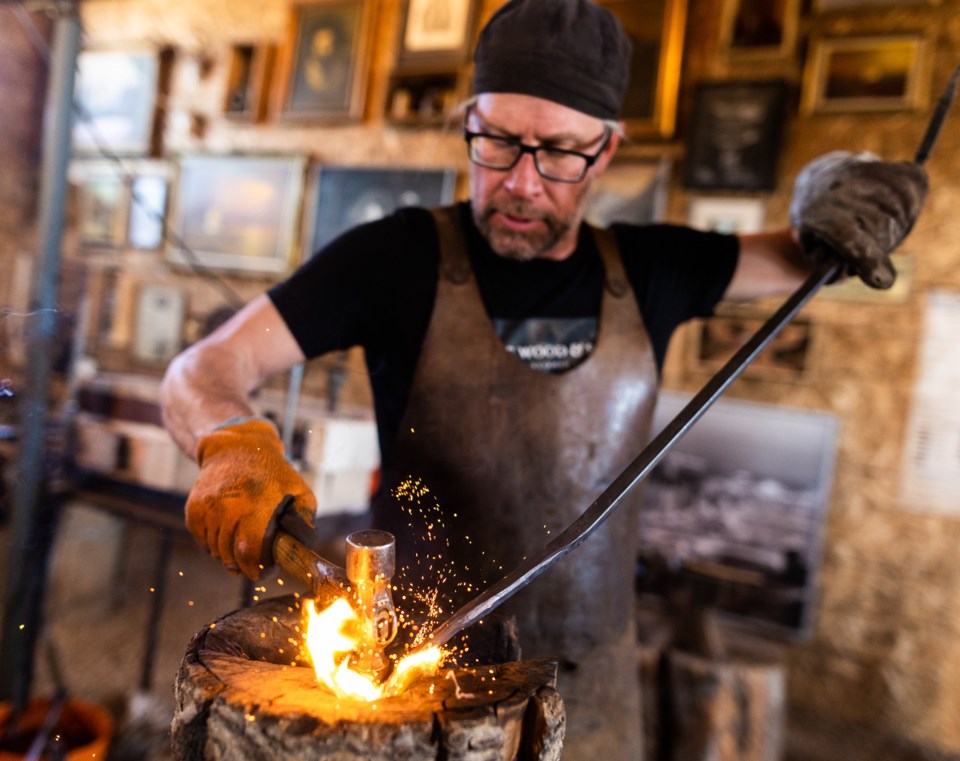 James Greisinger hammers a piece of iron at his forge. Greisinger, who operates Stone, Wood & Steel, hosts blacksmithing classes in his forge west of Millarville near Highway 762. (Brent Calver Photo)

Those looking for adventure and a chance to partake in western heritage tradition can test their mettle with blacksmithing lessons at Stone Wood & Steel in Millarville.

Head blacksmith James Greisinger has been creating architectural and artistic metalworks for 24 years, and he invites those feeling brave to spend a day learning what he considers to be the nearly lost art of blacksmithing.

What began as inviting friends and family to try their hand at his trade quickly became a fascinating opportunity to allow people to put skills back into their hands and create something that will last, he added.

“I’ve got all types,” said Greisinger. “I think the oldest person to come out was 76. I’ve got seven and eight year olds that want to take the class. We’ve been astounded by the focus and strength of, a nine- to 10-year-old, that have taken the class and women do amazing.”

Students spend the day learning forge safety and efficient use of the tools of the trade, and take home their own hand-forged creation, such as a garden strake, napkin holder, or a bottle opener.

“Before the COVID lockdown, I was having people from Calgary and from other countries, they’d come and take a class and then send me a photo of them proudly opening up a beer at Knox, with the bottle opener they had forged,” said Greisinger.

The introductory class covers what the blacksmith used to be, said Greisinger, and aims to inspire those at the forge to leave inspired.

“It’s very important to me that they don’t get scared away from the trade, but leave enthused,” said Greisinger. “I know I’m building competition but you know, over in Europe there’s a blacksmith in every town and really every block.”

Greisinger is proud to say that some previous students have considered blacksmithing a new career or hobby during his introductory classes, and maybe return for a second or third lesson.

Class runs from 9 a.m. to 5 p.m. in groups of six, with a children’s class running for only half the day. For more information go to stonewoodandsteel.ca. 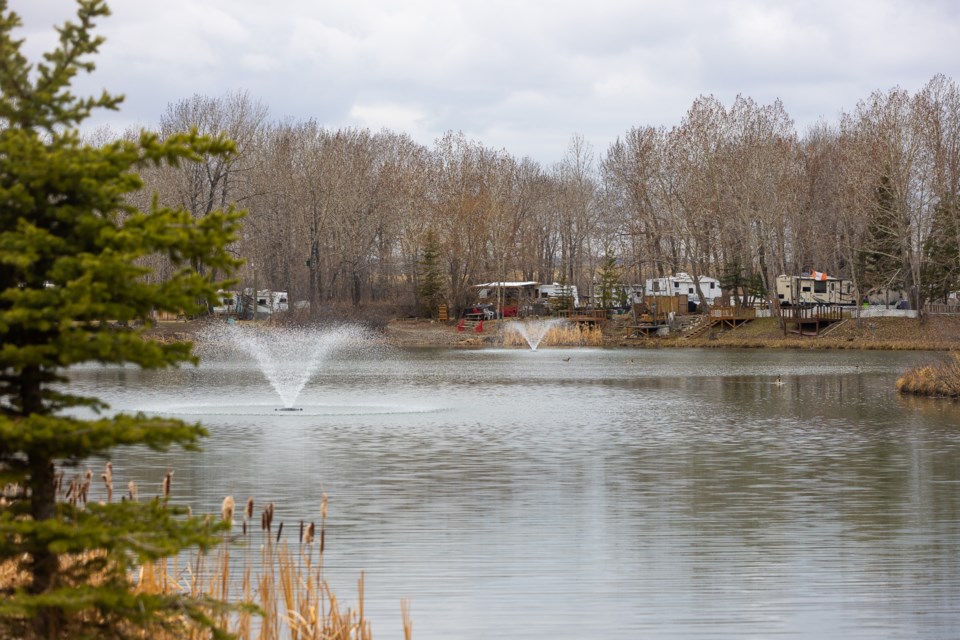 Riverbend Campground, located just east of Okotoks, sits on the banks of the Sheep River, and features a five-acre lake (pictured above). (Brent Calver Photo)

Though partially inside Okotoks, the Riverbend Campground remains a somewhat hidden gem for those who consider their ideal staycation getting back to nature.

“A lot of people in Okotoks do not know where we’re at,” said Dwayne Couture, the owner of Riverbend Campground, which is located just east of Seaman Stadium. “Unless they go out that way, they just never realize it.”

For those who have visited, however, it quickly becomes a popular spot due to its proximity to town, said Couture.

Boasting 300 camp sites, a five-acre lake and a full kilometre of land along the Sheep River, the Riverbend Campground features a variety of parkland and marshland allowing for a variety of camping experiences.

“We really push a kind of more natural setting,” said Couture. “We don’t pave our roads, we don’t pave our sites. We have several nature trails that are very bike friendly and a lot of berries and such up there in the spring.

“We’ve got the saskatoons and the chokecherries.”

The three kilometres of nature trails are interactive, with signs along the pathways depicting local plant life and animals that are often seen wandering in the wooded areas, said Couture.

With this natural setting, however, the campground still offers modern washrooms, laundry and Wi-Fi, as well as an on-site store for necessities such as wood or propane.

“For families, we have lots of activities,” Couture added. “We have an 18-hole mini golf, we rent out little four-seater bikes, we rent out golf carts, the lake has the paddle boats and we have three playgrounds throughout the campground.”

Perhaps one of the most unique features of Riverbend, is that their position of being partially inside of Okotoks allows for them to play by what Couture referred to as “two sets of rules.”

“Something like right now where we have a fire ban, because Okotoks RCMP and Fire responds to us, we’re still allowed to have campfires. It’s kind of a different situation,” said Couture.

The campground also features a large wooden gazebo, which Couture hopes will be used for small weddings and family gatherings in the near future, as it has been in years prior, alongside the many activities planned by Riverbend’s own social director, such as the annual Canada Day parade.