FOOTHILLS: Rooted in the Foothills

“That energy exchange between performer and audience is something we’re always chasing. It’s like magic.”

The waiting is the hardest part for a Foothills country music performer.

Singer/songwriter Lyndsay Butler is set to release her debut album Prairie Rose later this year, which she completed the musical component of in March of 2020 with several I’s to dot an t’s to cross before it can hit the shelves.

“I’m super proud of this album, but having to sit on this for a year has been a little daunting,” she said. “Now it’s doing all the work to get it ready, album artwork, making sure all the rights and mechanical rights are all appropriate and everybody has their name on it that has to have their name on it, distribution.

The 10-song album features nine original tracks in which Butler wrote or co-wrote along with a cover tune of Dolly Parton’s The Bargain Store.

“Lots of them were pretty quick writes and over the last seven years I like to think these are the best 10 songs that sort of go together,” she said. “There is one song in particular (Swayback) that I call a five-year song, it had the curse of the second verse. I had the verse down, had the chorus and the second verse finally got finished like five years later.

Butler gave a sneak peek for listeners with the release of the single Prairie Settler Song, an homage to her family’s considerable history in the Foothills, in June.

“My family has been here in Alberta, specifically out in Gladys Ridge, since 1885 and it’s just a tip of my hat to the people that were in the prairies before there really was anything,” she said. “The people that survived out here and how they worked together and worked with their neighbours, and everybody that was out here specifically to survive. I can’t imagine the winters, food or shelter and the grit that they had.

“When I actually started writing that song, I was working on that guitar riff that runs through the whole song and

She got some assistance in the creation of the song.

“I had a guitar lesson and thought well that sounds pretty cool going from this chord to that chord and the words kind of just fell out of my mouth,” she said.

“I think when that happens it’s not really me writing the song, I feel like I’m a channel for them and had a lot of help from my ancestors on that one.”

Sharing the past through art is crucially important for Butler, adding history is something we need to always keep close.

“The good, the bad, the ugly of it, we always have to keep it close and learn from it,” Butler said. “And every single day be thinking how we can do better or be better as humans and be proud of where we are as well. Canada is a pretty cool country.”

Butler caught the singing bug early, taking every opportunity to sing while growing up in Gladys Ridge and adding the guitar to her repertoire several years later.

“When I was a small child I always thought it would be so cool to perform at the Saddledome — it was the Saddledome at that time because I didn’t really know any other places,” she said with a laugh. “I was always singing whether it was school choir, church choir, our musical production group we had out here called the Blackie Gladys Players, just constantly always singing.

“And I picked up a guitar when I was about 19 — so a little late to the game on that one.” 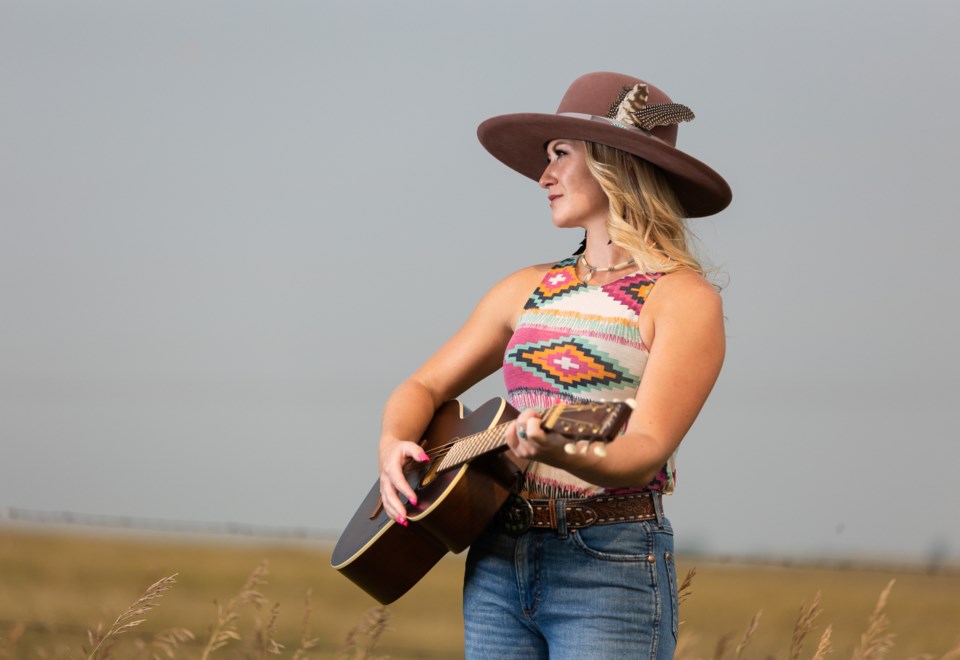 Butler at her home in Foothills County near Gladys Ridge on July 29. (Brent Calver Photo)

Once songwriting came into the picture for Butler, the rest was history.

A key turning point in her career arrived in November 2018 at the Canadian Finals Rodeo in Red Deer.

“I was there all weekend, I was at the rodeo, I was shopping at the small boutiques they set up for the Cowboy Christmas, I was going to live music, I was songwriting during the day with other friends that were there.

“I got back to my job on Monday and I basically was like ‘I can’t be here, this is not what I’m supposed to be doing.’ So I sent in my papers for my day job and have been full-time music ever since.”

Though the pandemic has hit the music and live performance industry particularly hard, Butler looked at the situation through a rose-coloured lens, focusing on the good that came from the bad.

“I think it’s been a lot of just being super grateful for what we still have,” Butler said. “I’m so fortunate to live out here in the country and just being able to constantly be outside and be with nature.

“Being able to do things like go camping with my friends which I would normally do because I was busy all weekend. To go camping and to see my family more than ever, I was on a riverboat trip one weekend, I was out helping a cowboy friend round up some cows and push them over the hump as they say.

“It’s just the different experiences I got to have over summer 2020, I always try to look at the positives and I’m pretty grateful for those experiences.”

Out in the eastern region of Foothills County, Butler said the pandemic also served as a community builder with neighbours helping neighbours and tough times galvanizing tighter bonds.

“It kind of brought it closer to home,” she added. “It made the world a little smaller.”

The gift of time was also something Butler looked to take advantage of whether it was grinding away at finger-picking styles on the guitar or prodigious writing – at least at the beginning.

“From March to August (2020) it was like at least one song every two weeks, sometimes more,” she said. “And then September came and I was like ‘okay, I need something to write about.’ I write from life experiences and I’ve got to be able to feel it and live to write about it honestly. Being locked up, well I already wrote a couple of those songs and no one wants to hear any of those any more.”

One downside for musicians was the impact on live shows and performances being incredibly hard to come by with restrictions on gatherings for large parts of the past 17 months.

Returning to the stage took some getting used to for Butler.

“As soon as they said go in Alberta it has been really, really go and go fast,” she said. “The first couple shows, it’s so funny because I notice just being out at a restaurant or out grabbing groceries, our social interactions with people are so different now. After being told to stay away from people, it’s like can I talk to people now? Can I wave? Can I be friendly?

“Now I’m expecting everyone to think ‘let’s go to a concert, it’s going to be awesome.’ And for me as an artist for the first couple shows was like ‘do I remember how to do this?’ A big part of my show is interacting with the audience and I had to just shake off those rusty old cobwebs.”

Just like riding a bike, the stage skills came back swiftly with a few reps on stage.

For Butler, a mid-July show during the cabaret at the Battle of the Foothills chuckwagon races in High River was pretty darn reaffirming and a reminder of why she chose this vocation.

“It is the best feeling in the whole world,” she said. “It’s such a cool energy exchange when you’re standing up there and they’re having a good time, they’re singing along, they’re dancing.

“That was my first full-band gig back and by the second song in I was like ‘my god, this is what I’m meant to do, this is where I’m supposed to be.’

“That energy exchange between performer and audience is something we’re always chasing. It’s like magic.”