FOOTHILLS: On the virtual stage

“We wanted to come up with a way they could still sort of present their talent and also just try to keep those little sparks that are inside them alive, giving them something to work towards and exciting to do during a crazy time.”

A virtual stage was built to deliver real talent.

Okotoks and area youth took to the camera this spring to enter the Ultimate Youth Talent Search, run by Heart to Sole Danceworks.

The competition was fierce with 28 entries for the first round, ranging from singers and dancers to musicians, visual artists, gymnasts, creative video editors and even sports tricks. After three rounds of virtual judging, the scores were close for the top five.

“I was so nervous,” said Dannan Pearcy, whose musical theatre singing performances like On My Own from Les Misérables landed her in first place. “While we were waiting for the results I was freaking out.”

The 16-year-old played her parts with full costume and theatrical presentations – nothing new to the singer who got her start on stage playing Fiona in Shrek Junior while in elementary school.

“Ever since then I’ve really loved it,” said Pearcy.

She went on to take vocal lessons and has performed at Town events like the Taste of Okotoks and Buskersfest.

Not being able to perform live during COVID-19 made her realize how much she missed the stage, and Pearcy was eager to enter the virtual talent show when her mom found it on Facebook.

The catch was, each entry had to be submitted as a video.

“I don’t feel really comfortable in front of a camera, so it definitely took some adjusting,” said Pearcy. “It pushed me out of my comfort zone a little bit.” 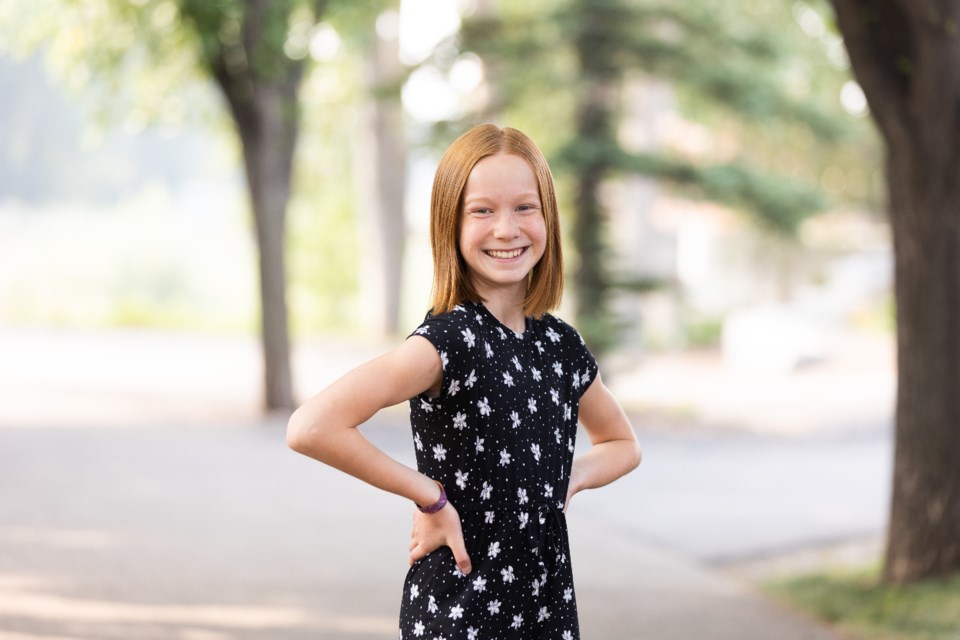 Lauryn Visser, a dancer who tapped her way into second place in the contest, said entering the competition via video was more difficult in some ways, but also had its perks.

“In some ways I think it would be easier to be in-person,” said Visser. “But in some ways, like for my last performance I also kind of edited two together, so I feel like that might make it a little harder in-person.

“But I think it would overall be a lot easier and more fun to do it in-person.”

She said coming up with new choreographed routines was a fun challenge to take on during the spring while dance studios were closed. Her first entry was the tap solo she had performed for her last live competition, but the rest of her submissions were new numbers.

“I went to some dance teachers for advice and we made it up ourselves,” said Visser. “Every song we just really liked and found easy to choreograph.”

After sending in her last entry, Visser was all nerves waiting to see whether she had made it into the top five.

Hearing her name announced as the second-place winner was surreal.

“I was so excited,” said Visser. “I wasn’t expecting to get into the top three and when I found out I was in second place I was so happy.

“I was really proud of what I had accomplished.”

She said the competition was a good way to keep dancing, after spending a lot of the season doing stretching sessions and Zoom classes at home.

Missing out on annual competition was hard, but Visser was happy to have another outlet to perform.

“It was so fulfilling,” she said. “It was very fun and I would definitely do it again.”

For 14-year-old Jaden Livingstone, entering the Ultimate Youth Talent Contest was a step far outside the box.

As a visual artist specializing in sketching, putting together a competition entry was something she had never considered, until she heard about the Heart to Sole event.

“I had no idea what anybody else was doing,” said Livingstone. “I didn’t even know if I would make it through the first round. It made me a little bit nervous because I was the only person who did that sort of thing – I figured the judges weren’t prepared for what I was bringing them; they were more prepared for the singers and dancers.”

Coming in fourth place overall was a shock to the young artist, who was surprised to see her last video entered into the top 10 for judging.

Before any announcements were made, she spent a few hours rewatching videos posted by the other competitors, and was awestruck by the talent she was up against.

“Making it that far into the competition, I was definitely hoping to get first, second or third but I saw the videos and some people did absolutely amazing,” said Livingstone. “It was just such a different level of talent.

Livingstone’s videos were compilations of works she had created in the past as well as time-lapse footage of her creating pieces on-the-spot.

The hardest part was finding a video-editing app that would do everything she envisioned. Once she had that, it was about practicing good time management.

“Each video took a lot of hours,” said Livingstone. “I would do it every day when I found out when the next due date would be, and it was at least an hour a day.”

Now she’s putting her thinking cap on to find a way to perform next year if the contest is able to go live.

“I’ll be trying to figure something out until then,” she said. 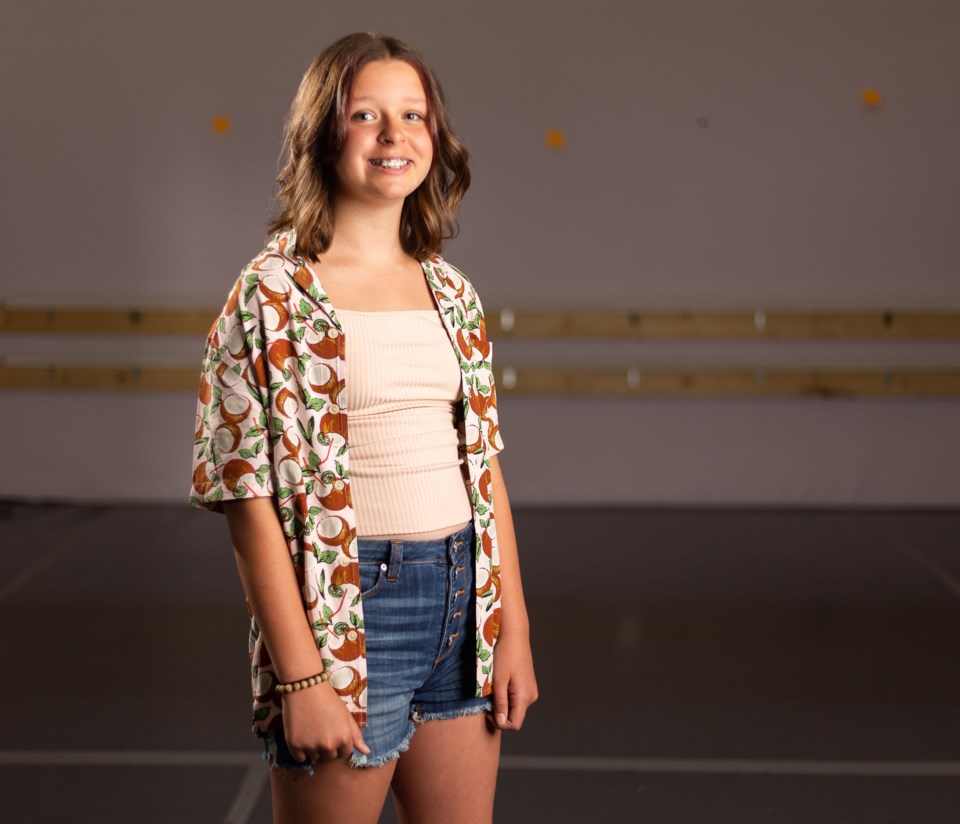 Skyla Mitchell, whose vocal performances of favourite songs earned her the fifth slot in the competition, enjoyed getting creative with the videos.

She had a hand from her parents, who helped scout locations and filmed her pieces.

“We went to a lot of destinations and we also set up a green screen,” said Mitchell. “We actually went to a graveyard in B.C. where we camped for Dancing in the Sun. I was pretty lucky and I owe that part to my parents.”

The 12-year-old was happy to place in the competition when she saw who she was up against.

“I was pretty proud of myself, since they are all a little older than me,” said Mitchell.

Performing is nothing new for Mitchell, who has done karaoke regularly at places like Hub Town Brewing and on cruise ships with her family.

The thought of possible going live next year is exciting, she said, though she admitted it would be more nerve-racking, and having entries done as video submissions likely brought more people to the competition.

Erin Kerr-Trethart, owner of Heart to Sole Danceworks, was pleased with the turnout and interest in the virtual competition.

“We had a ton of entries and we had a ton of different styles,” said Kerr-Trethart. “There was a little concern at first we would get just a lot of dancers and not necessarily anything else because of who we are, but we got such a great variety of talent.

“That was exciting for us, because we really wanted to do it as a community event, not a business event.”

She was impressed with the Ultimate Youth Talent Contest’s first year, despite some hiccups like having contestants and their parents learn how to set up YouTube accounts and links for submissions.

There were many learning opportunities over the course of the contest, and she said they’re incorporating it all into making next year’s event even better.

While they hope it can be a live stage show, it may still include a video element for a hybrid version of the competition.

What really matters is getting young people on stage to showcase their talents, she said.

It was particularly important this year.

“Just knowing kids in all sorts of sports or music and extra-curricular activities lost their option to perform or do any sort of competition,” said Kerr-Trethart. “We wanted to come up with a way they could still sort of present their talent and also just try to keep those little sparks that are inside them alive, giving them something to work towards and exciting to do during a crazy time.”

Coun. Tanya Thorn volunteered on the panel of virtual judges, who viewed each video and provides scores and comments back to performers after each round of entries was submitted.

She said the scope of talent was impressive, and not just in the chosen genres like singing or dancing.

Her favourite part of judging the contest was witnessing how the performers progressed from beginning to end, incorporating comments from the judges into their next submissions and exhibiting personal growth.

There was still one element missing in a virtual environment – the emotional connection of a piece, which is harder to feel through a screen.

“It’s hard to see somebody on a video screen and really get that sense or that feeling, that emotional piece of a performance,” said Thorn. “I think that was the missing piece for me, but at the same time I thought it was a great compromise.”

She said judging is a little more difficult remotely as well, because with a live show there could be some discussion among the panelists on technical abilities like voice pitch or proper dance techniques.

Despite missing the personal touch, she said the virtual contest was still a great outlet for the youth in the community to be creative and feel the spirit of friendly competition.

“The majority of us have been isolated in some way, shape or form from those types of interactions and I think this was a way for them to be able to showcase their talents and focus on something that’s positive,” said Thorn.

“The part I love about it is seeing the creativity of kids, and understanding the depth of talent we have in our local region, which I think is really unique.”