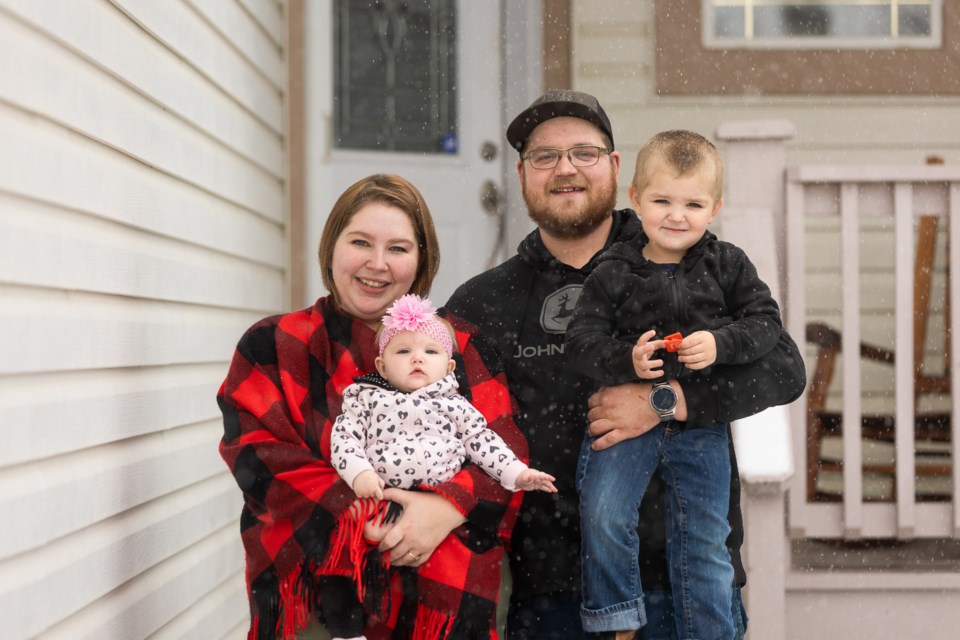 EXCITEMENT and a touch of anxiety are typical for many moms-to-be, but those who found themselves expecting during the pandemic were dealing with much more than a little morning sickness.

From the first trimester to labour and delivery, notable differences have marked pregnancy for parents, like partners being unable to attend appointments and ultrasounds, wearing a mask in the delivery room and relying on technology to introduce little ones to family and friends.

In January 2020, news of the coronavirus was beginning to circulate but it still seemed distant for mom-to-be Kathleen Hurtak, who was dealing with the surprise of a lifetime.

“We had tried to have a baby for eight years,” said Hurtak. “We ended up finding out we were pregnant six months along and then he came two months early, so it was a whirlwind to start with only about a seven-month pregnancy that I knew of.”

Her baby boy bounced into the world on Feb. 5, 2020, and spent his first 16 days in the neonatal intensive care unit (NICU).

Though her pregnancy and delivery hadn’t been impacted by COVID, she said they took notice when their son was released from the hospital and they tried to pick up the supplies they were told to have on-hand at home.

“We were unable to find hand sanitizer anywhere because it was already sold out everywhere, and they had said we needed that,” said Hurtak.

Neither mom nor baby had postpartum check-ups in March, because most doctors’ offices were closed and she was told if there weren’t concerns they shouldn’t risk coming in.

Since he was born, Hurtak has only been able to take her son for one pediatric appointment in a year and had to let her instinct kick in when it came to his health and development.

“It was definitely scary, different,” said Hurtak. “We were figuring it out as we went.” 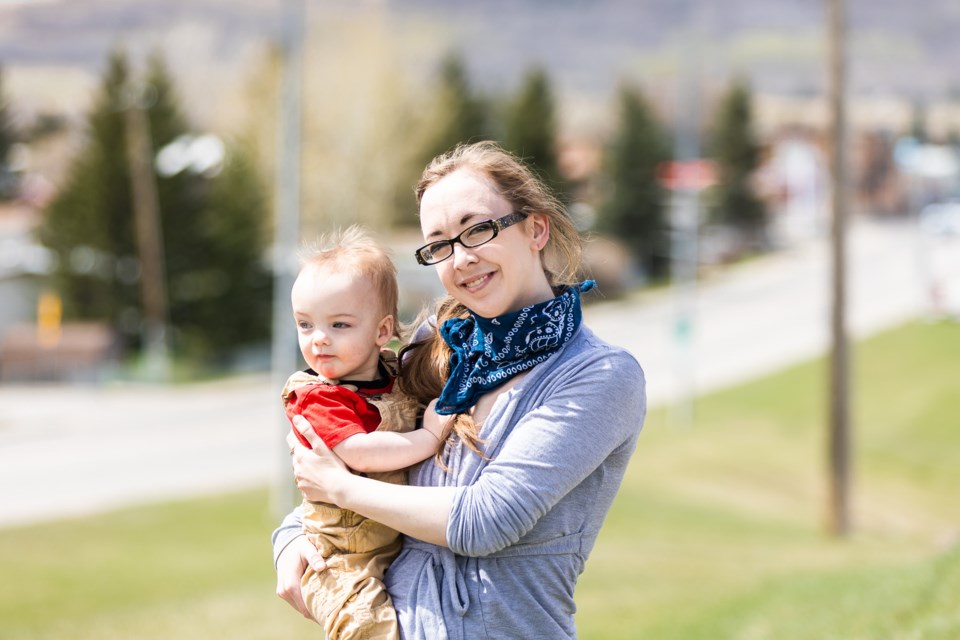 Kathleen Hurtak with her 15-month-old son Lucas. Hurtak nursed and has been raising Lucas while also operating her small business, Northern Vape Co., through the pandemic due to COVID uncertainty and lack of childcare. (Brent Calver Photo)

That included running their business, Northern Vape Co., in Black Diamond. Hurtak delivered her baby on a Wednesday and while he was in the NICU she was sent home Thursday, and returned to the store Friday to open up.

Hurtak runs the store every day while her husband works part time at another job, and with the uncertainty of the pandemic looming she decided to get right back to work so their finances wouldn’t take a hit.

With fear of exposure for their newborn, they decided not to find childcare, and Hurtak has worked with her baby boy by her side for the last 14 months.

“He’s come with me to work every day since he got released from the NICU,” she said. “Luckily with our store we have it well set-up so we can keep him distanced from everyone and everything, and we have a playpen for him there.”

Despite the instant change to their lives, Hurtak said finding out she was having a baby after so many years of trying to start a family was a bright light during what could have been a darker time.

He helped her find gratitude every day, she said.

“He’s the best surprise I could ever ask for,” said Hurtak. “I think this year would have been a lot worse, and I got luckier than a lot of people.

“But after trying to have a baby for so long, he’s definitely been the highlight of the year. We’ve been really lucky, that’s for sure.”

Okotoks mom Erica Simpson welcomed her second child on Oct. 15, and the bulk of her pregnancy was during COVID-19 shutdowns with restrictions on things like doctor appointments.

“Honestly, it was a lot harder than I thought it would have been,” said Simpson.

Her son, who was two years old throughout her pregnancy, had to accompany her to most of the prenatal doctor visits because she didn’t have access to childcare.

He wasn’t permitted at ultrasound appointments, and it was difficult to find people willing to take him in for those visits.

“Hiring a babysitter didn’t always work out with COVID, and I was given a hard time bringing him to appointments with me,” said Simpson.

There were fewer appointments to attend due to the pandemic, to help limit any potential exposure.

When Simpson was expecting her son there had been doctor visits monthly and five ultrasounds throughout the pregnancy.

With her daughter, two ultrasounds were conducted – the typical anatomy scan around the 20-week mark and one right at the end to ensure the baby was not in a breech position.

Doctor appointments were more sporadic and spaced out by far more than four weeks.

“If I had a concern I had to wait months just to ask the question, and by then it was not relevant,” said Simpson.

When the baby arrived in October, Simpson anticipated the typical six-week postpartum check-up, and was shocked when the appointment was for her only, and baby wasn’t seen by the family doctor until she was nearly eight weeks old.

However, she said with all the surprises and differences during a 2020 pregnancy, bringing home a baby girl was a ray of hope – and a source of entertainment for the toddler.

“It makes having to be stuck at home all the time a little more doable,” said Simpson. “Now he has somebody to play with, somebody to interact with, so he’s not getting anti-social.” 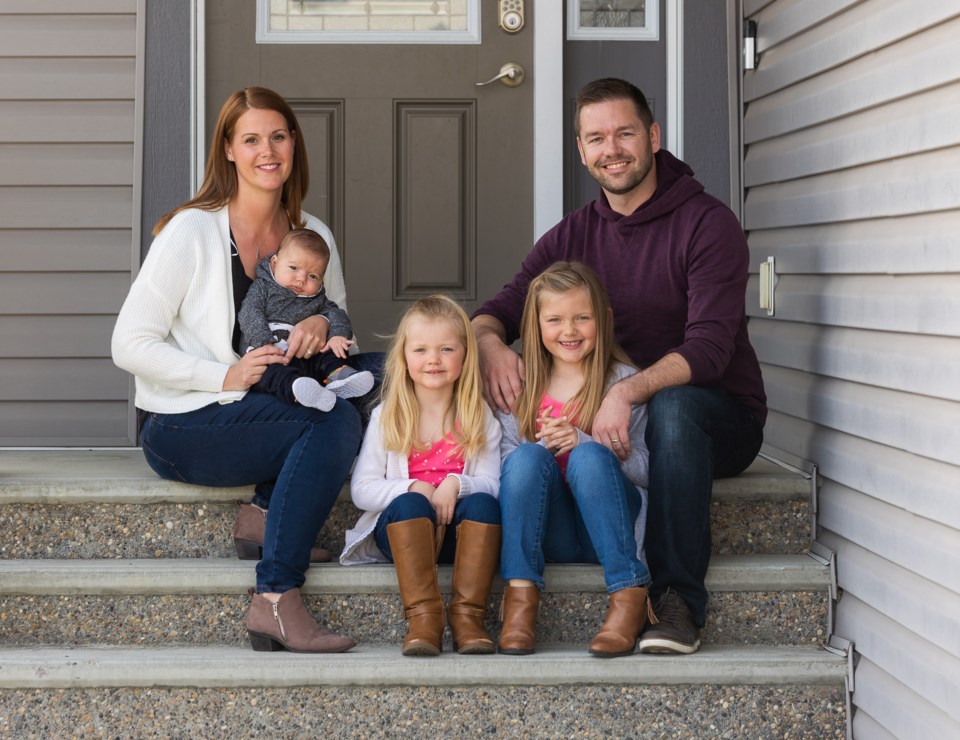 Shaylene and Stefan Dykema with their children (from left) Preston, Brooklyn, and Lillian. Shaylene had Preston during the middle of the COVID-19 pandemic. (Brent Calver Photo)

For Shaylene Dykema, who gave birth to her third baby in High River on Jan. 15, being told to stay home was welcomed at first.

Her doctor had recommended they not go anywhere for about two weeks prior to her due date to minimize risk.

“Alberta was in lockdown over Christmas and in our case it was beneficial,” said Dykema.

Being pregnant with her son was a completely new experience.

When she was expecting her two daughters, there had been opportunities for her husband to be involved with ultrasound appointments and doctor visits.

This time around, he was only able to come to the initial screening ultrasound, which Dykema said she appreciated because it’s the first opportunity to see whether there could be something wrong with the baby, and having a supportive hand to hold was helpful.

But when it came to the anatomy scan, he was left out.

“It was so different,” said Dykema. “You could FaceTime if you wanted, but that timing didn’t work out for us. And it’s different holding your hand and seeing it at the same time as opposed to through a phone.”

She said there was a brief period of anxiety when doctors suspected something might be wrong with her gall bladder.

Although it turned out not to be serious, the experience brought on a new world of anxiety.

Dykema had to go by herself to be checked out, and because of the symptoms she was experiencing hospital staff were in full personal protective equipment, and she was given a COVID-19 test.

“It’s definitely a lot more nerve-racking,” said Dykema. “They don’t know what COVID could mean if you get it when you’re pregnant.

“That was a little bit more scary, and it kind of puts you into thoughts like what happens if I have COVID, or my husband has COVID when the baby’s being born and he can’t be there?

“You kind of go down a little bit of a winding road if you’re not careful. I found you have to stay away from those thoughts.”

She said focusing on her other children and her job helped to distract from the winding road, and she took every precaution.

As a school teacher, she had been forced to go online in the spring when she was in her first trimester, and opted to continue teaching virtual courses when school returned to in-person learning in the fall.

“I was in a lucky situation where I was able to do the online schooling, so I didn’t really have to worry about that,” said Dykema.

Bringing home her baby boy in January came with mixed feelings – joy and gratitude for a healthy newborn but also some sadness at not being able to share him with family and friends.

Her parents had stayed for a week to help with the older girls when the baby was first born, but Dykema said they haven’t seen the family since.

“My brother hasn’t met my baby yet, and his wife had a baby in October and we haven’t met his baby yet either,” said Dykema. “There’s those things where you’re missing out seeing, sharing, those little interactions where you don’t get the time back.”

She said having a baby during COVID was a light in the tunnel, but has also felt more isolating than it typically would.

“Really it was overall normal-ish,” she said. “It’s been good, just different compared to the first two.”