FOOTHILLS: Longview teen all fired up

“It’s not something a lot of people do, especially at my age, but it’s really nice that people are interested in what I’m doing. I’m really thankful for all of the opportunities that people have given me.”
Tammy Rollie
Aug 25, 2021 8:15 PM
Listen to this article
00:06:24

Quinn Sinton is your average teenage boy in many ways.

The 16-year-old loves to skateboard and chill with his friends, but, unlike his peers, Sinton spends hours each week firing up his forges to shape scrap metal into knives, fire pokers and keychains.

Four years ago, the Foothills Composite High School student created a shop in his parents’ garage in Longview, complete with a belt sander, bench grinder and drill press. Previous to that, he had set up a 100-year-old coal forge lent to him by Longview resident Lorne Fuller, as well as a gas forge and his grandfather’s anvil to make an anvil stand.

“I make some of my own tools and decorative stuff like fire pokers and knives,” said Sinton. “I experiment. I’ve made knives out of railway spikes. I have a couple that I’m working on right now.”

It all started in the Sintons’ backyard fire pit six years ago.

“I heated some metal up and tried to forge it just because I was interested,” Sinton said. “I slowly started collecting tools from people, like old broken drill bits and round bits of steel, so I could shape it into something.” 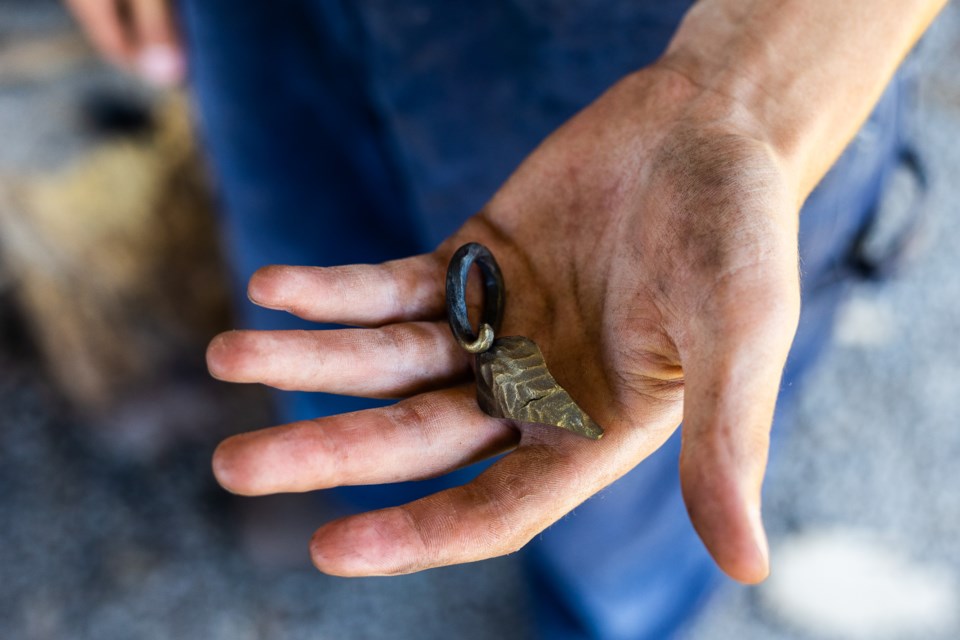 Sinton holds out a hand-forged keychain at his home backyard forge in Longview. (Brent Calver Photo)

Soon, Sinton came up with the idea to make knives.

“When I was younger I had a couple of knives that were really expensive,” he said. “That brought the interest that I wanted to make my own. I would rather put in the effort with something I’m happy with that I made than buy something someone else has made.”

Throughout his junior high years, Sinton enrolled in Oilfields High School’s metal fabrication program which further propelled his skills in the shop.

“I had done a bit of welding beforehand,” he said. “It helped bring my skills along with that.”

It wasn’t long before he began selling the items he was making.

Sinton said he prefers to use steel with a high carbon level, such as farrier rasps and leaf springs from cars.

“To make a knife, you need a hard carbon steel, otherwise it won’t hold the edge,” he said.

For the handles, Sinton uses wood from wherever he can salvage it.

“I used wood from school,” he said. “Other times I would just find a cutting board that was made of maple or olive wood. I do lots of repurposing. I get lots just from people that don’t want their stuff anymore.”

In a village of about 300 people, word gets around quickly when a teenager picks up blacksmithing as a hobby.

“A lot of people just give me their old stuff,” he said. “They’ll have spring and files and rasps. I do buy quite a bit of new steel as well. I’ve just started buying nice handle materials.”

Sinton has received a lot of support as people learned about his interest in blacksmithing.

“A lot of people have helped me along the way – my teacher Mr. (Dave) Toews and Mr. Fuller who lives down the road taught me how to weld when I was first starting out," he said. "He helped me with my shop. There’s been some blacksmiths that I’ve worked with quite a bit. Lots of people have been interested in wanting to help.”
James Greisinger, owner of Stone Wood & Steel near Millarville, is among them.

Greisinger recalls Sinton’s mom, Deanna, reaching out to him asking if her son could join one of his blacksmithing classes.

Greisinger, who had never taught blacksmithing to children at that time, agreed to have Sinton hang out with him for his own curiosity. He had him stand on a 12-by-12 wooden block as Sinton was too short to reach his anvil stand.

“His bicep was smaller than the hammer he was using,” he said. “I expected him to last maybe an hour or two. Deanna phoned me eight hours later and asked, ‘How is he doing?’ I said I don’t think he’s ready to leave yet.”

The two bonded over the fire and Greisinger took the young boy under his wing.

“Off and on I spent tons of time with him, now he’s rocking and rolling on his own,” he said. “He tapped into some kind of blacksmith ancestry somewhere in his blood.”

Greisinger has had Sinton help him on several occasions at the Millarville Christmas Market and in his shop.

“He listens, he’s engaged and he’s absorbing what you’re saying,” he said. “You can tell he doesn’t want to be into it to make a lot of money. He just likes it and wants to work with malleable material.”

Sinton has joined blacksmiths and farriers in doing demonstrations at the Longview parade and the Calgary Stampede’s Aggie Days.

“It was fun to show people how to do it,” Sinton said. “Everybody was interested because I was really young at the time. I was like a 13-year-old kid with a bunch of grownups.”

In addition to his blacksmith work, Sinton also does leather work - crafting belts and sheaths for his knives.

She’s also been sharpening knives. In fact, one of his biggest customers is Longview’s Little Apple Café and Bakeshop.

Longview Leather sells some of Sinton’s knives and the rest of his sales is through word of mouth – which doesn’t take much in a small village.

“A lot of people commission me to make a custom design,” he said. “I recently made one that was for brandings and I had to make the tip of it round and sharp. It was really interesting.” 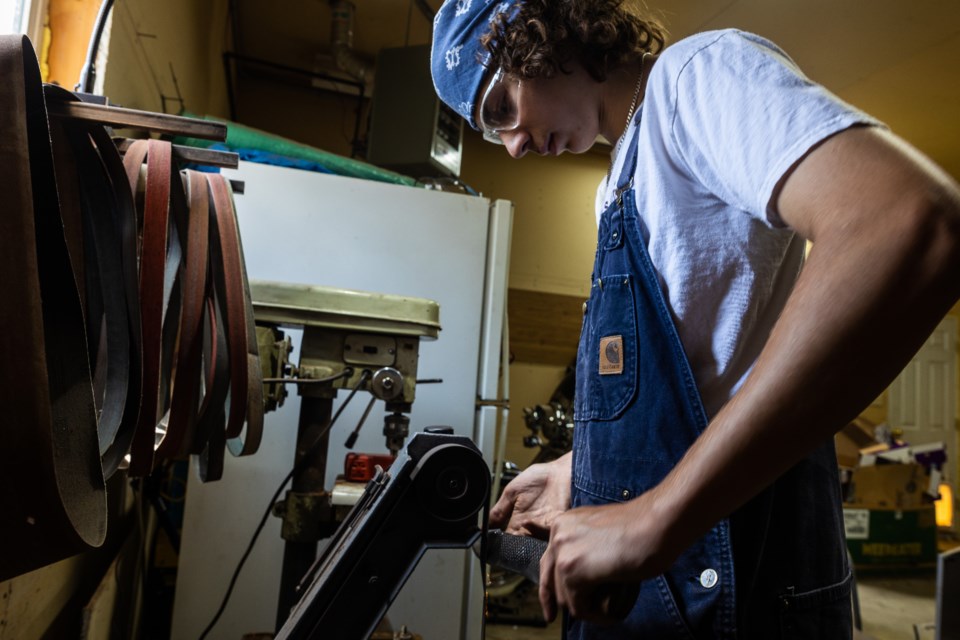 Word of mouth has resulted in one of Sinton’s knives being auctioned off at an Alberta Fish and Wildlife banquet in High River when he was 13 or 14 year old. He said it was auctioned for around $100.

The money Sinton makes from selling his knives goes back into buying tools and materials.

“For now it’s just a hobby,” he said. “There is a lot of stuff related to it that I could look at for a future path. I’m not sure it’s what I want to pursue, but it’s definitely something I want to keep with me for the rest of my life because I’m definitely interested in it.

“It’s not something a lot of people do, especially at my age, but it’s really nice that people are interested in what I’m doing. I’m really thankful for all of the opportunities that people have given me.”

The generational impact of Operation Christmas Child
Dec 6, 2021 8:50 AM