THE JOY OF technology and discovery fostered by Okotoks area schools has led a former Foothills resident down a career path to innovation with North America’s leading automaker.

“One of the key things in my life was the exposure to science and technology early to really allow me to focus my career and on the role of technology and business,” said Alex Purdy, head of Connectivity Businesses, Ford Motor Company. “All three of those schools I attended while growing up taught me the role of hard work.

“Strathcona-Tweedsmuir taught me particularly to follow my dreams and to challenge the status quo.”

He credits his teachers from Percy Pegler, Okotoks Junior High School and Strathcona-Tweedsmuir School for sparking his diverse interests.

Although Purdy is now working for the company famous for the Model T, the Mustang and the F-150 truck, he grew up in the Foothills area at a place known for another mode of transportation – trains. Home was what is now Champion Park, a small train museum off of Highway 2.

“That was my grandpa Gerald Knowlton who started that up,” Purdy said.

Purdy’s early schooling prepared him well for post-secondary life and a journey that ultimately led to Motown.

“For undergrad I was at the University of Western Ontario,” Purdy said. “Technically, my degree is in business and applied statistics as well.”

After graduation from Western he got a job close to his Foothills County home and with ties to Alberta’s oil industry.

“I became an investment banker with Scotia Capital focusing on oil and gas investments, financing and mergers and acquisitions,” Purdy said. “Spent time in Houston, Buenos Aires working on oil and gas transactions and I lived in Calgary for about two years.”

His goals were to help build a business and also to fulfill his ambition to keep on learning.

“I had a real interest in learning more and broadening my horizons, so I applied to a bunch of business schools and got into one of the leading ones and decided to go,” he said. “I was the youngest in my class and had an absolute blast.”

That school went by the name of Harvard Business School. The key thing he may have picked up in Cambridge, Mass. was the role of technology to optimize business.

“I took a couple of classes in optimization which is how do you use technology to improve your output for a given level of performance,” he said.

He was at Harvard during the 2008 financial crisis, with a prof who was regularly used as an expert on CNN and other news outlets.

He graduated from Harvard Business School in 2010 with a master of business administration with high distinction.

He used those skills to work for Boston Consulting Group in Chicago after leaving the Ivy League school.

But the love of building that he developed at Okotoks schools pulled him in different direction – he went to help run a company many Foothills area farmers will recognize.

While there are mixed feelings about deer in Okotoks, Purdy knows first-hand nothing runs like a John Deere, where he worked prior to Ford.

“I have a ton of respect for farmers, I volunteered with the Calgary Stampede for a number of years, I really appreciated that the world population was growing and that we would have to feed them in a sustainable way,” Purdy said.

“That required us to do more with less, otherwise we would not feed a bunch of people or do it an unsustainable way. That huge challenge was very exciting for me… What always gets me excited is big messy challenges.” 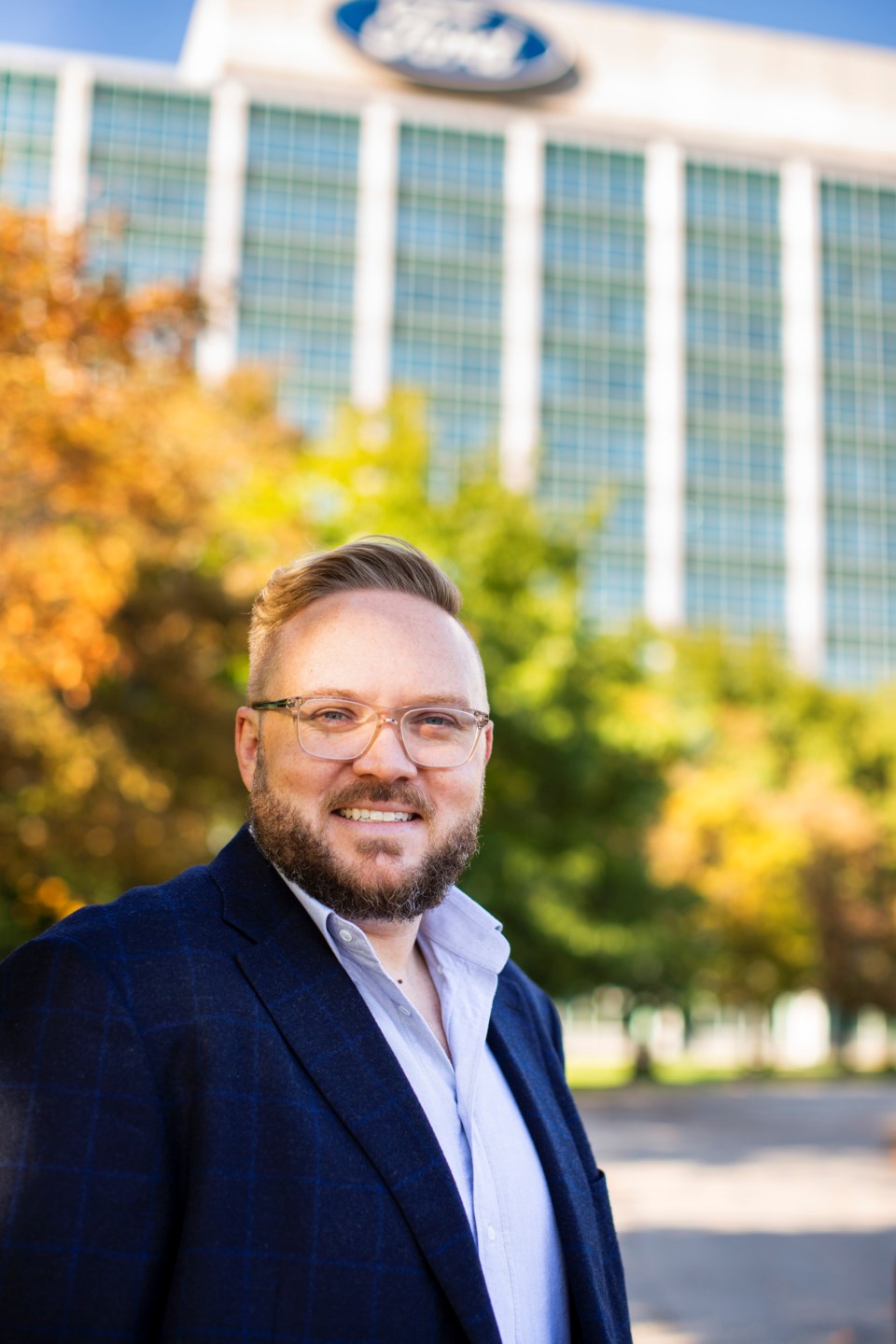 Alex Purdy is helping Ford with its latest technology and updates for customers’ vehicles. (Photo submitted)

“We ran a program which would automatically gear the tractor through the field and it would make sure that you were planting at the right speed, the right depth, down pressure, right spacing between seeds in order to optimize planting operations,” he said.

He also led the $305-milllion acquisition by John Deere of Blue River Technology.

“Blue River Technology used cameras and sensors to identify weeds through artificial intelligence – kind of like facial recognition to identify weeds from plants,” Purdy said. “If you could find a weed, you only had to put herbicide on that weed and not the rest of the field.

“That allowed farmers to save 90 per cent on their herbicide application. That was good for the farmers and it was certainly good for the environment.”

Purdy is now challenging the status quo for Ford, where he started his latest job in early 2020.

“Ford is really trying to transform its business,” Purdy said. “They have a new CEO Jim Farley, that sees the world changing. He understands that technology is going to drive the largest parts of the business advantage. He brought me on to lead all of our connected businesses.”

He said that involves investing in technology in vehicles.

“So, we have a number of sensors and modules that make the vehicles smart and that costs money,” said Purdy, while sitting in his truck in Detroit. “We also invest to communicate from that vehicle through Cloud architecture, through modems and Gateways, and we build software applications in the Cloud that allows customers to interact with their vehicles, to be productive and to drive up the lifetime of that vehicle.”

He said increasingly, people are choosing their vehicles based on technology as opposed to horsepower, shape and other criteria.

Purdy described a telematic product which can be used from a cellphone, a Ford entertainment system in the vehicle or website tool.

“A lot of our commercial customers have 50, 100 or a thousand vehicles and it allows them to see those vehicles in the field, know where they are, how much gas is in them, what potential service events they may have – one has low oil, one has a tire leak,” Purdy explained. “They can see all of these things.”

Purdy anticipates when the battery-electric F-150 Ford Truck is released later this year the range of the battery can be extended over time without the owner having to come into a dealership.

In March, Ford released its first over the air update for vehicles.

“It was updated just like your phone,” Purdy said. “It had never happened before at Ford. There are very few manufacturers who can update every module today. Tesla is and we are. It was very exciting to be there when the button got pushed and put it out into the market.”

The technology to provide more energy in the future could be highly beneficial in the event of disasters, for example.

During the February cold snap in Texas, F-150 Hybrids were used to power residents’ homes when power grids went down.

“There were a bunch of people using their hybrid powered F-150 vehicles to power their house – our equipment can actually be used to power something outside of the truck,” Purdy said. “We saw the use of that spike in Texas and we want to provide optimization of that feature based on customer feedback.”

Ford dealers in the area provided F-150s to their customers who had the power going down in the truck due to providing power to their homes.

That feedback from Texas customers was used when Ford released its on air update in March.

“We did this in response to what we saw in Texas,” he said. “This is on brand for Ford. It believes in community.” He is looking forward to the future with Ford.

“We are going to transform customers’ productivity and we are going to drive software into the car as the core element of differentiation over our competitors,” Purdy said. “Autonomous vehicles are still a few years away, but there is going to be this transition from vehicles that are driven to vehicles you go into and enjoy as you are moving from A to B.

“This offers such a huge opportunity for new features in vehicles and most of those are software related...That’s why I am here, I love big challenges.”

He has already faced one big challenge.

“I joined Ford post-COVID,” said Purdy, who has a husband Julian and their two-year-old son. “So, while I run a large business and have a lot of people reporting to me, I have met almost nobody on my team. I have only been in my Ford office once.”