RETIREMENT AND COVID aren’t blowing the whistle on one man’s hobby.

While his more social pursuits have been hampered, Jeff Mahaffey has found the time to go full-steam ahead in his model railway at his Turner Valley home.

While not a new project, the past year has given him significant amounts of time for a construction boom in his immense 1:87 scale world.

Mahaffey originally picked up the pursuit in the late ‘60s and early ‘70s.

He was working for CP Rail at the time, and a conversation with the service manager at his dealership got the ball rolling.

“I would go in for servicing and chatted away with him, and I found out he was a model railroader,” Mahaffey said. “He invited me to come over and have a look at what he’d started.

“That’s where I got my interest.”

With a career and growing family, he said, he had neither time nor space to go all-out with the pursuit.

As life allowed, he began a model railroad in his home at Prince George, B.C. in the ‘70s, themed after the Cariboo region of the province.

When he and wife Judith sold their home, however, he had to dismantle it.

Since moving to Turner Valley in 2011, he began to build his current railway, beginning in 2015. His new railroad runs in and around the fictitious municipality of McLeod.

Inspiration for the name and environs is a now-defunct line the Canadian Pacific Railroad built 1890s from Calgary to Fort Macleod called the Macleod Subdivision secondary line.

While Lethbridge remains linked up along these rails, the Fort Macleod terminus is no more.

The miniature town of McLeod is Mahaffey’s exploration of what might have been for that line. Each model railroader chooses a time period for the world they create, with various model engines and structures being available for those eras.

Mahaffey’s McLeod is set in the late ‘50s, when the line that-could-have-been would be in its heyday. 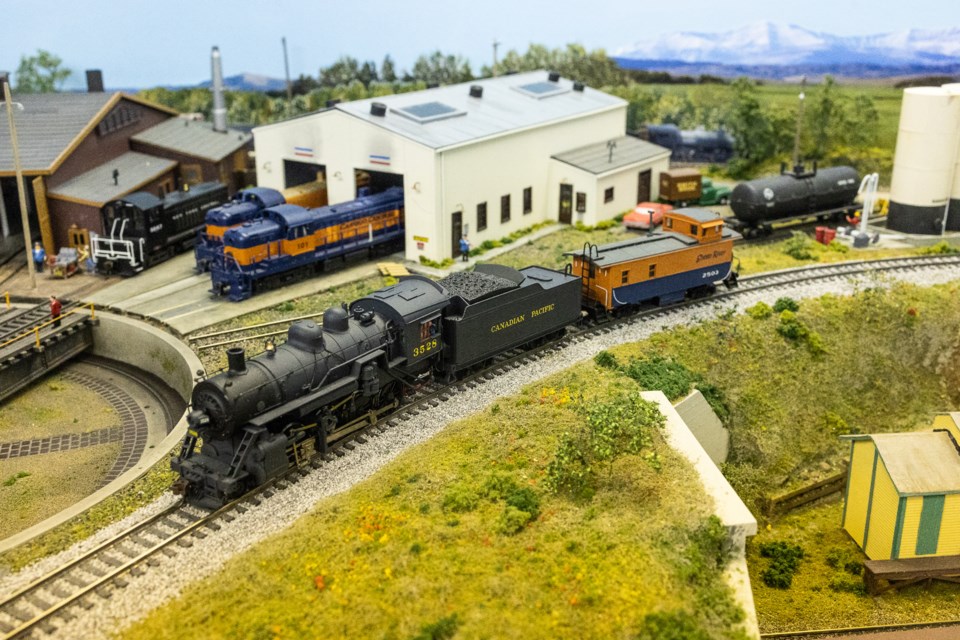 For much of those years, progress was slow, splitting time with his other hobbies of dancing and golf, especially during trips to Arizona in the winter.

“When we got back in April, I would usually have six or eight weeks before golf season started, when things started to slow down I would start working again,” he said.

Staying at home during the pandemic has given his model community some urban revitalization.

“Since last year, it’s been almost every day down here for anywhere from two to five hours doing something,” he said.

For this he counts himself lucky.

“I think I’m in a much better situation than a lot of people,” he added. “I have a lot of friends who are sitting in front of the television watching hockey and golf all winter, waiting for the sun to come out so they can get out and do something, where I’ve had myself busy for months.”

Not all the time spent on the railway is hands-on.

Mahaffey, who was working in architectural engineering in the ‘70s, will plan out his creations in his mind and on paper before committing.

“A lot of the hours are spent with a cup of coffee in hand, looking over things, making decisions, and getting a vision of what you perceive that you want to do there,” he said.

In this small world are various Rockwellian scenes, like a drive-in burger joint, a car dealership, and a café, much of which was built from scratch using small pieces of wood.

The work bench, shelves, and cabinets tucked around the sides of the McLeod region are lined with packages of small wood and metal pieces.

“You always have to have two or three projects on the go,” he said. “You can do so much work and you have to wait for the glue to dry, that kind of stuff.” 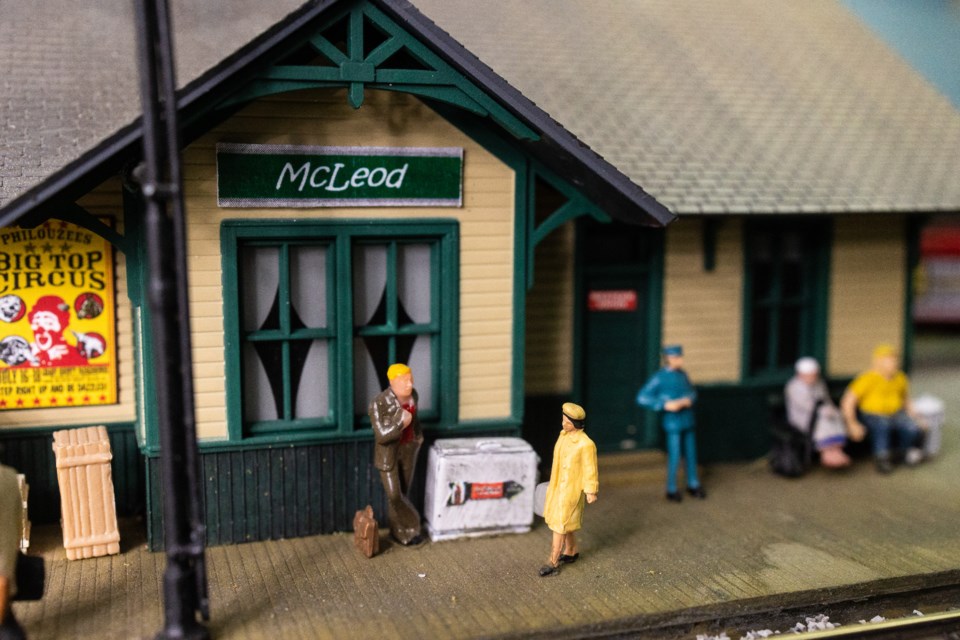 The train station for McLeod, the fictional region in which Jeff Mahaffey's model railroad is built. Based off a now-defunct CP Rail line to Fort MacLeod, the 1:87 scale world, set in the 1960s, is an exploration of what could have been for the line. (Brent Calver Photo)
Most recently, he finished applying the logos and numbers to his engines and cars for the Sheep River Railway, the railroad company of prominence in his fictional world.
The technology is still evolving in this nearly-100-year-old hobby. Where before, the track would simply electrify with DC current, running any train touching its surface, Mahaffey is now utilizing a smart controller system that will run specific trains on the same track.
The current sent into the tracks contains a signal that corresponds with specific trains, allowing different engines to be active or inactive.

The 153 feet of main line also have electronic turnout switches, controlled from central consoles that allow trains to be rerouted to another estimated 50-60 feet of track in the various yards and sidings.

These allow a train to navigate the complex rail yards and routes, as well as be transferred into tracks for storage beneath the surface of the large plywood cabinets upon which McLeod is built.

“In my view, model railroaders come in two groups,” Mahaffey said of his discussions with other hobbyists. “There’s the guy that wants to play trains, he wants to run trains, and then the other guy that is more interested in the actual construction and building of it, that sort of thing.”

Mahaffey said he is of the latter variety.

“The only time I run trains is when I know that my grandchildren are coming over and they’re going to want to see me run a train route,” he said. “I like to build things. The idea of building these structures, I really enjoy that.”

The construction isn’t always as simple as assembling a kit. Mahaffey’s true passion lies in scratch building, where everything is assembled from raw materials, such as miniscule pieces of wood.

One of his stock cars, assembled by hand, consists of over 300 pieces of mostly toothpick-width wood.

“That’s the thing that inspires me,” he said.

While railroads are often a solo pursuit, Mahaffey had help from Judith, who helped paint scenery and some models such as people and animals.

Her main pursuit through COVID has been sewing and working on the family photo albums. The model railroad, however, has shown her a different side of her husband.

“I’ve always been really supportive of that hobby of his life,” she said. “I never knew he was so creative until he started. “I think it’s a wonderful hobby.” 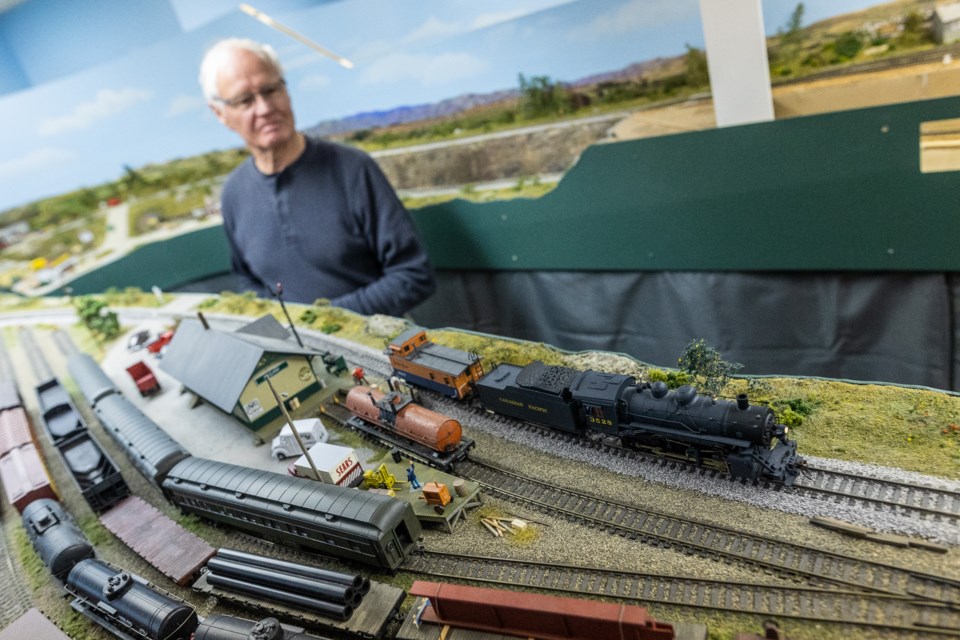 That hobby isn’t just for the young at heart, said Don Chehowy, owner of Trains & Such, a hobby shop in Calgary serving model railroaders.

“We get a lot of parents coming in with their kids and they say they just seem to be hardwired for trains.”

This, he said, creates a lifelong love.

“You never lose it, I find,” he said. “Life interferes and this and that, but if you’re into it, you’ll be drawn back into the hobby.”

There are a handful of model train scales, the most common of which for North American model railroading is HO scale, Chehowy said, which comes in at 1:87 scale, similar to Mahaffey’s, and dominates about a third of the market.

Another common option for model railroaders is the smaller N scale, coming in at a miniscule 1:160 scale and popular for the ability to fit in smaller spaces with its 9mm-wide track.

A major draw for N-scale is the ability to run longer trains in the same space due to being able to space out the imaginary world one creates.

The outliers, Chehowy said, are “fringe type stuff” like Z and G scales.

Those partial to gardening might find themselves enticed by the noticeably larger G scale, mostly used for garden railways with its more robust 45mm-wide track and 1:24-1:32 scale trains.

“There’s something for everyone—all price levels and quality—there’s so much to it nowadays,” Chehowy said. “You just lose yourself in the hobby; you start at 9 p.m. and all of a sudden it’s 3 a.m.—it’s great stress relief. “I just find it all really fascinating.”