“For me now, it’s the support from the friends I have… I like to have fun as a priority in life and these surroundings just supply that in spades.”
May 20, 2021 9:45 AM By: Bruce Campbell 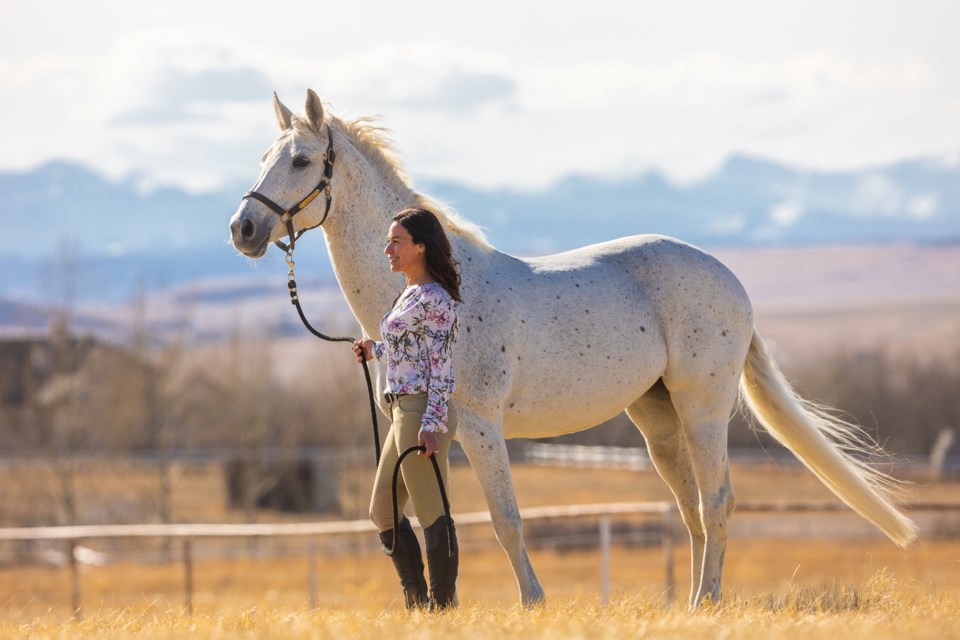 Tracey Abbott with her Westphalian horse Celine at Foxtrail Farms on. Abbott moved to the Okotoks area in 2010 to be closer to friends and family and fell in love with the Foothills, frequenting the various towns and corners of the county. (Brent Calver Photo)

IT WAS THE love of horses that brought a woman to Okotoks more than a decade ago.

However, it was her falling in love with the people, the recreation and the community that made Okotoks and the Foothills her home.

“I was fortunate enough to get a job that allowed me to work from home and I decided to leave Calgary and move to Okotoks in 2010,” said Tracey Abbott, a project manager for Cisco Technologies. “It was a smaller town, I was closer to my horses – as I had horses boarding in the area.

“I just chose to move here.”

Eleven years later, a person has to practically be on a horse to keep up with the active Abbott as she takes in the Foothills area from steak in Longview to hikes near Turner Valley, riding with friends, playing polocrosse, walks on the pathway and shopping.

It was polocrosse – a combination of polo and lacrosse played on horseback – that first got her introduced to the Okotoks area.

“I ended up buying a horse for it and that’s what drew me out here, being able to play with the horses on the field, and then everybody took their horses with them camping, I just fell in love with the whole lifestyle out here.”

The ladies in the Foothills area gave themselves the somewhat underserving moniker – The Breakaway Bitches – as they would take a break from it all now and then.

“We did a lot of stuff with our horses – gymkhana, camping trips, rodeo,” Abbott said with a laugh. “We were drinkers with a horse problem. We had ourselves t-shirts, hats, logos….”

Abbott presently lives in the Cimarron area near Costco.

“It is beautiful to wake up every day and see the mountains,” Abbott said. “It was a small town and the hiking in the area (around Okotoks) is amazing.

“It made no sense for me to live in Calgary… I outgrew the bar scene a long time ago and the people I saw from Calgary were the football crew (at Stampeder games). Mostly my friends from Calgary come here and take in what Okotoks has to offer, like hiking.” 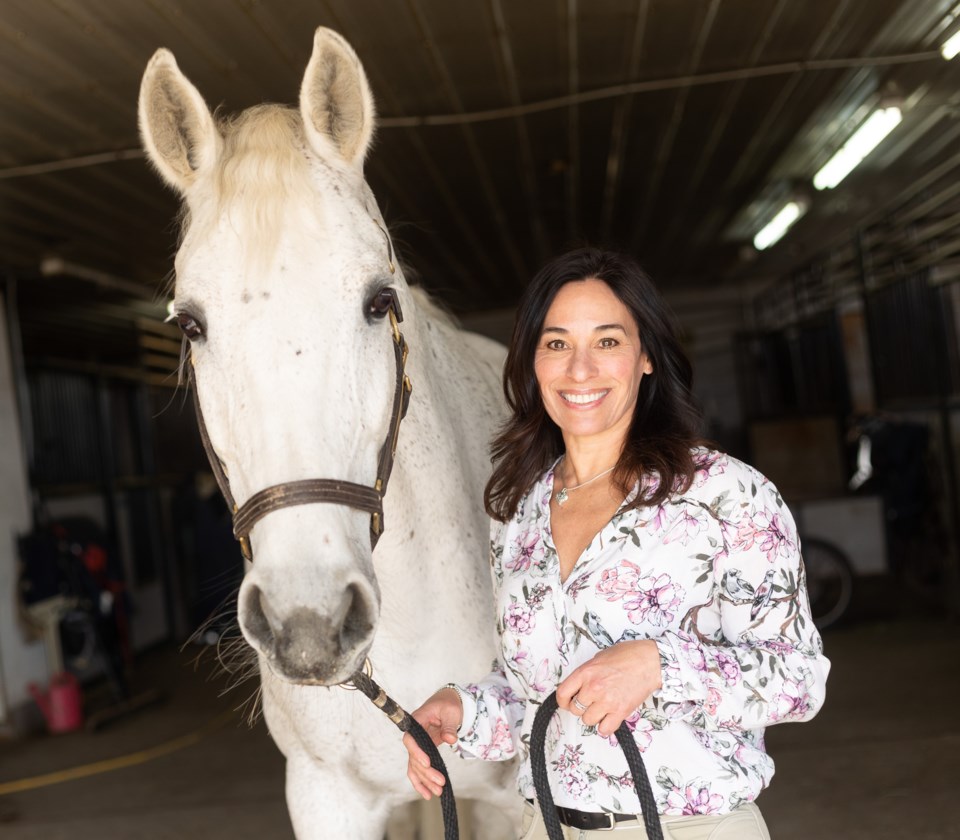 Tracey Abbott with her Westphalian horse Celine at Foxtrail Farms on. Abbott moved to the Okotoks area in 2010 to be closer to friends and family and fell in love with the Foothills, frequenting the various towns and corners of the county. (Brent Calver Photo)

While living in Okotoks, Abbott has been able to link herself up with an unofficial hiking group, an eclectic set that does many hikes in and around Foothills County.

It’s a hearty group that isn’t afraid to do things a bit differently.

“It comprises a group of people from Longview, Black Diamond, Turner Valley and the Okotoks area,” Abbott said. “We might hike to the top of a mountain, enjoy a glass of wine, read some poetry and then come back down.”

Her closest friends may be her horses, and while she called the Stampede City home for close to 30 years, if you love horses, best to saddle up in the Foothills.

“When I first moved here, I didn’t have any of my own, I was using my friends’ (horses),” Abbott said. “Then I bought one for polocrosse. My second horse I met on a meat truck. She was on the way to the slaughterhouse and they stopped at a friend’s house.

“I got her for free and 10 years later, she is still taking me through the mountains.”

Abbott regularly camps with her horse Brownie and friends at sites west of Longview and Turner Valley.

“We just pull into an equestrian home base, go for a day-ride, come back $698 to the campsite, have a big dinner – they are beautiful spots,” Abbott said.

Those locations include Sandy McNabb and Blue Rock campgrounds west of Turner Valley and Indian Graves campground southwest of Longview.

“Right now, I am on my way to feed my horses,” said Abbott while driving using a hands-free phone device. “Foxtrail is more of a laid-back jumping barn. It’s not super-prim, proper. It’s welcoming and more comfortable for me to be here.”

Foxtrail is operated by the Doty family – Jim, wife Caryl and daughter Claire.

“Claire is a Grand Prix FEI recognized jumper, she gives great lessons,” Abbott said. “I have been with them for about five years, they are like family.”

The Foothills also offers world class facilities for Abbott to compete in jumping.

Abbott regularly competes at Rocky Mountain Show Jumping in DeWinton, as well as at the famed Spruce Meadows at the northern tip of Foothills County with Celine.

However, as much as she would like to, Abbott can’t ride 24/7. Okotoks also has provided a variety of other activities for the high-energy Abbott.

“I will go hiking on the trails and take in the activities the Town puts on – Light Up Okotoks, and I volunteer for the Show N’ Shine,” Abbott said. “And I love all the activities on Elizabeth Street. It’s awesome having my mom at Heartland (Retirement Residence) because access to Elizabeth is right there for her, so we can stroll the shops. She can walk out her door and be there in five minutes.”

Home is where the heart is. And when Tracey’s father passed in 2016, she wanted that person closest to her heart, mom Audrey, close to home.

“I knew mom would enjoy a smaller town,” Tracey explained. “And Heartland is a top-notch care-home facility, so it gives her independence.

“It’s great that she can walk out the front door and she is right in the community – right on the river for the paths there. She is still very mobile at 90.

“I felt that if she was in Calgary, she would be very isolated, it would take a car to get anywhere. In Okotoks it’s all in walking distance.

“Plus, I live here and my good friends are in Okotoks and they support us as well… she loves it.”

Oh yeah, there’s another reason Abbott said it’s great to have her life-time friend close by.

“It gives me peace of mind knowing she is just five minutes away,” Abbott said. “I can swing by and we do stuff for a couple of hours.

“She loves going for a drive. It’s great that Longview, Turner Valley and Black Diamond are right there. “We will head straight west, pull out some lawn-chairs, have a brunch and just stare at the mountains.

“You can’t do that in Calgary.”

Some favourite haunts include Sweetgrass, the British Chippy and others on Elizabeth Street.

“Mom loves the Longview Steakhouse and the Westwood in Black Diamond,” Tracey said.

With friends and family in Okotoks and Foothills County, the area has become so much more than a great place to have horses for Abbott. It’s home.

“The horses were the big deal,” Abbott said. “For me now, it’s the support from the friends I have… I like to have fun as a priority in life and these surroundings just supply that in spades.”