FOOTHILLS: Black Diamond artist has her own style

Scraps, cuttings and bits of thread the inspiration behind Holly Bain’s creations
Tammy Rollie Aug 25, 2021 7:30 PM
Listen to this article
00:07:16

In a region that regularly sees artistic accomplishments on display, it’s hard to believe that the creative talents of some artists rarely leave the four walls of their homes.

Holly Bain is among them.

The Sheep Creek Weavers member of 16 years refuses to showcase her work at the group’s annual sale, and expects she never will.

“Whenever the Sheep Creek Weavers have a sale and I try to make something for the sale it just sort of taints it,” she said. “It messes with my head. I think of what would someone want instead of what do I want.”

Bain’s creations remain in the comfort of her home - in every room and on every wall.

Throw pillows, lampshades, floor tiles, wire sculptures, jewelry, painted mugs, pen and ink drawings and wall hangings are among the hundreds of creations decorating the Bain household. Bain lives with her husband Ted, a town councillor who’s served their community of more than 2,700 people since 2017, in a home they designed and moved into in 2013.

“I surround myself in beauty,” said Holly. “Every place where you look in your house should have interesting textures and colours.” 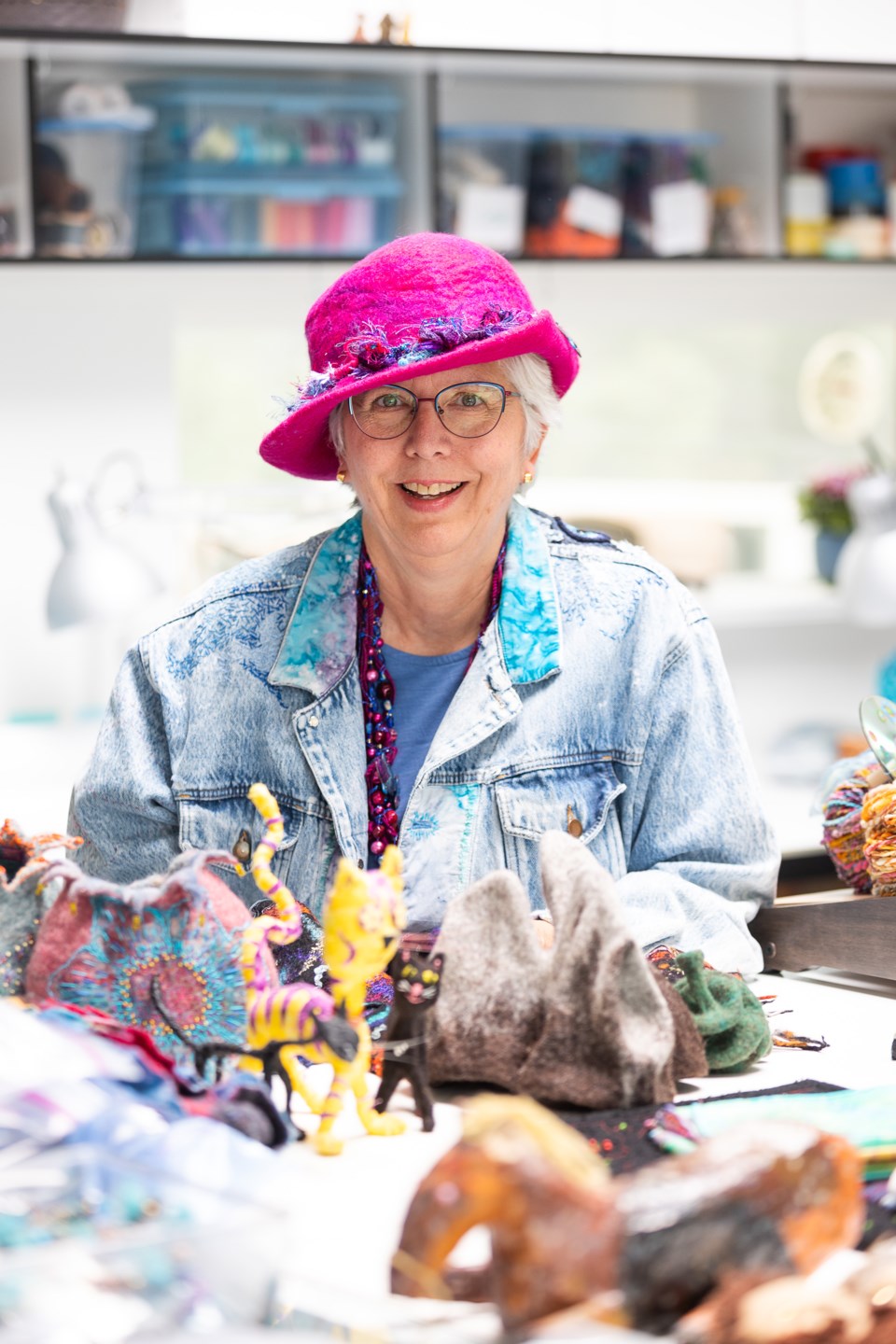 The Bain home boasts just that with its array of fabric wall hangings, paintings, homemade décor and artistic touches at every turn.
Bain comes by the talent honestly, and with no training.

It was while growing up in a window coverings business in Vancouver wherein Bain’s appreciation for the arts developed.

“I literally grew up in the workshop,” she said, adding her earlier years were spent in the upper level of the shop. “We didn’t have very much money because everything went back into the business.”

Store-bought toys were not something Bain had the luxury of owning as a child.

Instead, she made her own.

“My toys were anything that I could find in the wastebaskets from the cuttings from the drapes, little bits of thread, awning materials and bits of wood from the cornice boxes,” she said.

In Bain’s eyes, she was surrounded by treasures.

“Every castoff cutting, every flawed fabric, every scrap and snippet of thread was there for me to turn into a fabulous gown for a princess, a jewelled bridle for my unicorn or a pillow for the bed of a troll,” she said. “The only limits were my ingenuity, my skill and my imagination.”

In junior high, Bain began sewing her own clothing. Throughout high school and into her late 20s, she worked for the family business sewing drapes and repairing and assembling blinds.

When she had two daughters of her own, Bain began sewing their clothing.

“I’m frugal,” she said. “I would take a plain white t-shirt and some cotton in a print and cut off the bottom of the t-shirt and sew a big circle skirt and sew pockets and sleeves. They loved those because they could twirl.”

Bain briefly took her creativity beyond her home and, with encouragement from her daughters’ teachers, began decorating themed bulletin boards outside of their classrooms.

“For Halloween I did a paper cut-out of a haunted house, pumpkins and cats around the border,” she said. “It was a creative outlet.” 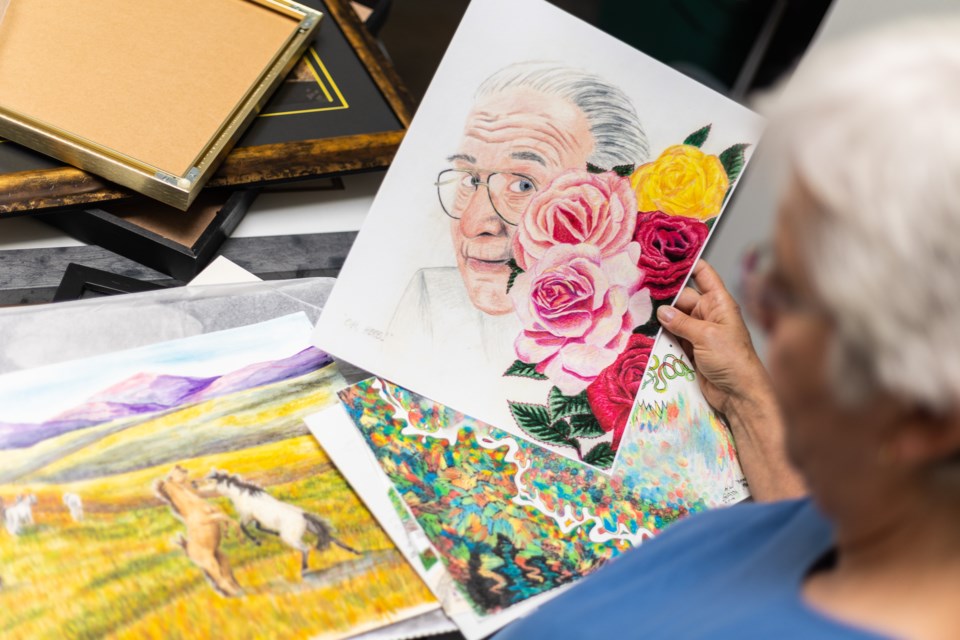 Black Diamond artist Holly Bain displays various drawings and paintings in her studio on July 31, with one of her father Herb at the forefront. (Brent Calver Photo)

As her daughters grew older, Bain delved back into the arts and began collecting fabrics, yarns and paints, and surrounded herself, once again, with treasures.

“My daughter says I have two hobbies, acquiring the material and using them all up,” she said.

Having obtained most of her material from garage and estate sales, Bain has an abundance of thread and fabric at her disposal.

“My parents were people of the Depression so they never wasted anything,” she said. “I never waste anything. I don’t throw anything out.”

From floor to ceiling, Bain’s home studio is filled with materials and on-the-go projects.

“I’ve got a whole drawer full of UFOs: 'unfinished objects,'” she said. “I just put it away for a while and let it rest and bring it out with fresh eyes.”

Among the projects Bain’s been working on for years is what began as a sleeveless vest made of colourful knit squares sewn together.

“It put it on and said, ‘I’m never going to wear it because it’s too hot, for starters, and it’s a little bit on the tight side,’” she said. “It wasn’t flattering.”

Bain decided to convert it into a shrug, but it still didn’t look right. She then began transforming it into a cardigan by knitting sleeves and adding a black collar, but the wool made her skin itch.

“Now I’m lining it,” she said. “I’ve been working on it for over three years but it’s going to be beautiful when it’s finished, and it’s getting close.”

When a project doesn’t work out, Bain just comes up with another idea.

“The way I work is I get an idea and I start working and I think, oh I could do that, maybe I should do this or if something goes wrong I make it so it’s supposed to be there,” she said. “The whole thing takes a life of its own. It never ends up the way I started.” 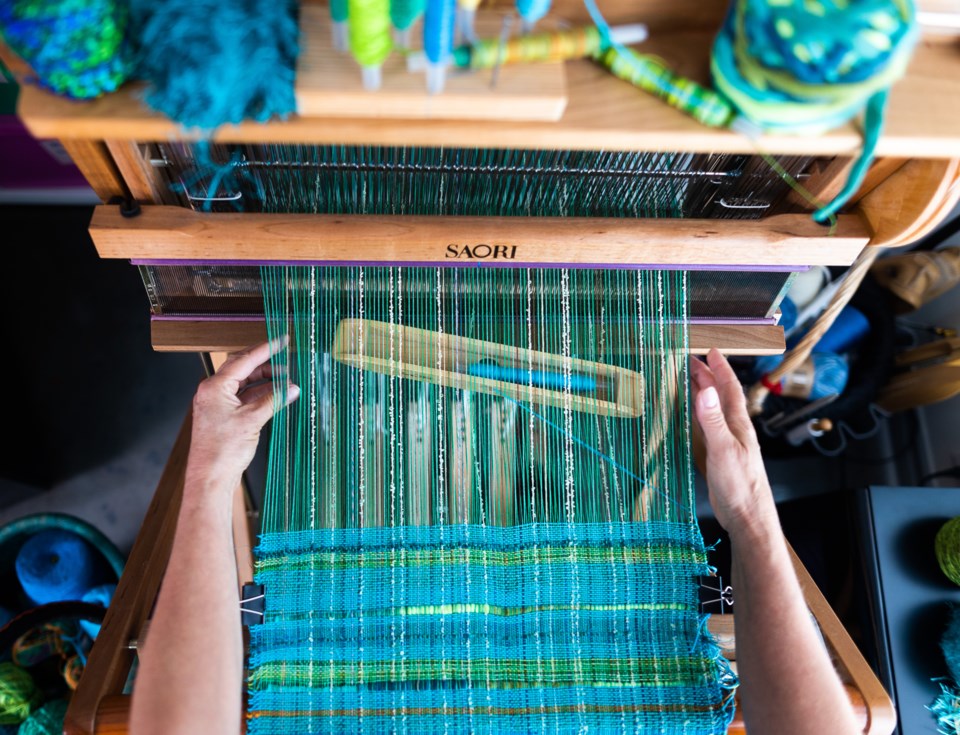 The majority of Bain’s projects are her own creation derived from her personal expertise, but in 2005 she took a leap of faith and joined the Sheep Creek Weavers after learning about the group while living in Cochrane.

The Sheep Creek Weavers, a group of fibre artists who’ve been gathering monthly to celebrate their individual projects since 1974, is the only art group Bain has joined.

“I had heard about them from talking to people and I thought, Let’s just see what it’s about,” she said. “I attended one of their fairs and I thought, I would love to learn how to do this.”

Prior to joining the weavers, Bain’s artistic education came from the hundreds of art books she owns, and the Internet.

“I was getting to the point where I needed mentors,” she said. “I remember coming away from the first Sheep Creek Weavers meeting and I was so stoked. I finally found my people.”

The self-taught artist had used scraps to make clothing and art, but felting and weaving had never before been on her artistic radar.

Now Bain owns spinning wheels and looms, which rarely sit idle. Any residue from her looms is woven together and spun into another piece of yarn so nothing goes to waste. 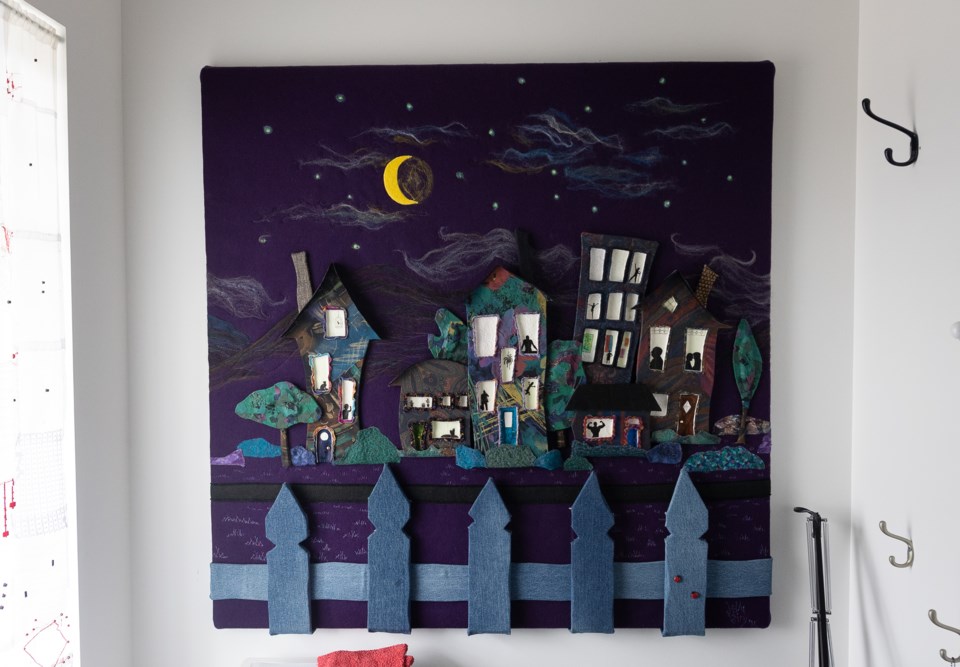 A large work of felting, paint, and sculpture by multi-medium artist Holly Bain resides in her home. (Brent Calver Photo)

“I learned needle and wet felting, weaving, knitting, so many things,” she said. “They have workshops for a reasonable price. Just seeing what all of these other people make I thought, I want to do that.”

While Bain missed her Sheep Creek Weaver colleagues during the COVID-19 pandemic, she thrived at home, tackling projects on her own.

“This pandemic has been so bad for so many people, but it’s helped me because I have something I can focus on by myself,” she said. “I never had any problems about what to do. I just go in my studio and do something.

“I get into this zone and totally lose track of the world around me, how I feel, time, everything.

"That is the main reason why I do art.”