FOOTHILLS: A community love of theatre

“When everything is going well, it really is a huge adrenaline rush when you hear the audience applauding at the end. It is the reason we all do theatre for those moments when it just works. It’s like winning a gold medal.”

For members of a Foothills theatre group a large part of their world is the stage, and the men and women are delighted to once again be players.

The Dewdney Players, which started in Okotoks in the 1990s, is gearing up for their next ensemble production in I Take This Man at the Rotary Performing Arts Centre in September. It will be their first live performance at the venue since February 2020.

“We had cast the show and we were ready to start rehearsing before the pandemic,” said Dewdney’s president Nicola Payton. “We recently had a quick read through (in July) and as soon as we are done Anne of Green Gables, we will start rehearsing.”

Dewdney Players got started in 1982 by Earl and Sandy Singer, who have since moved from the Okotoks area. It was named after Dewdney Park, where the group first started doing productions. (check this)

The Sands of time

Ed and Debbie Sands joined the drama group in 1992, along with their late daughter Amy, to become involved in an upcoming Chautauqua.

“I got involved in my first play with Annie in 1994 to assist with sets and that kind of stuff,” Ed said. “And Deb was producing.”

In typical Dewdney fashion, Deb stepped in to help in an emergency when the original producer fell ill.

“The director was very worried because she didn’t have any sets or costumes, programs...” Deb said. “I told her, ‘I’m just a volunteer, I don’t work at the moment, I can help.’

“I think my actual position was production assistant. I didn’t think I deserved the title of producer.”

Ed also helped out in an emergency during that production. He made his first appearance on stage with Dewdney when a person with a walk-on role in Annie suddenly left for Vancouver.

With the exception of a few years, the Sands have been heavily involved with Dewdney ever since. All three of their children, Stephanie, Amy and Mike participated in Dewdney plays in some fashion while growing up.

Ed loves the tech side of things, making sure sound and lights are going right.

“The timing thing – 3, 2, 1 click the lights go on, you have to hit that button to start that sound effect, the lightning you have to send...” Sands said. “You have to contend with yourself. Just how to solve those technical problems.”

Ed recalls when a new sound cue device was being used in which the effects would go off in sequence. However, if someone hit stop, the device went back to cue no. 1.

“The second cue was footsteps coming up the stairs and somebody had hit stop and the first cue in the play was a train – whooo, whoo, chooga -- and the actor’s cue was ‘What’s that? She’s coming up the stairs,’” Ed said with a laugh. “Instead of steps it was ‘whoo, whoo.’

“One of the actors (Reg Gothard) turned to another one and said: ‘By train.’’’

The play was aptly performed at The Station. 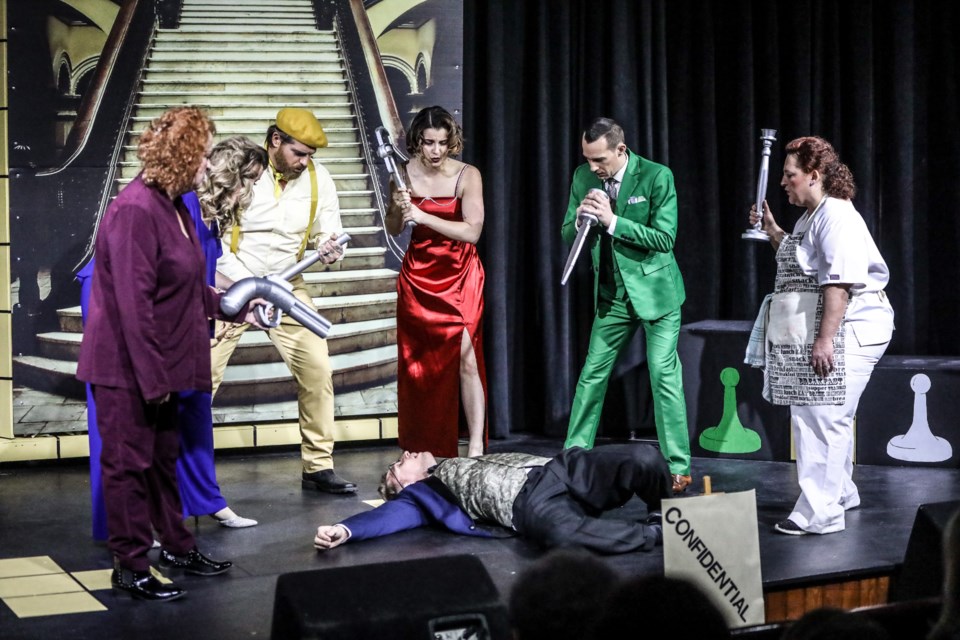 The likely suspects all stand over the late Mr. Boddy (played by Dave Elder) in the Dewdney Players performance of Clue at the Rotary Performing Arts Centre. (Brent Calver Photo)

Home on the stage

Dewdney president Nicola Payton has been with the group for 14 years, about a year after arriving in Okotoks from her native England.

“One of the first things I did was see a Dewdney show and then I got a chance to audition with them in their next play and I have been there ever since,” Payton said.

Ironically, the first Dewdney play she ever saw was a play in which she had a role during her final performance in the U.K.

“I thought this is a group that does the same sort of theatre that I do, I want to join them,” Payton said. “I always found that when you move to a new place, joining the theatre group gets you lots of friends, and it is true.”

She got close to her fellow actors right away in her first production with Dewdney, The Werewolf’s Curse.

Payton played one-half of conjoined twins in a circus sideshow act. She was joined at the index finger to actor Susan Moore, who also came from Britain.

Payton was an actor for her first few Dewdney productions but her role got much bigger with the theatre group.

“With community theatre, you pretty much do anything that needs doing,” Payton said. “I helped with make-up and sets and then I sat on the board, and then I started directing...

“I love directing, it is like bringing up children. You start them with nothing and then they take off and fly on their own.”

Her favourite play she directed was Clue the Musical.

The theatre group didn’t have a clue it would be its last live performance at the RPAC for 18 months.

“It was the last one before the pandemic,” Payton said. “It was a fabulous show, the actors were phenomenal, the audience absolutely loved it.

“When everything is going well, it really is a huge adrenaline rush when you hear the audience applauding at the end.

“It is the reason we all do theatre for those moments when it just works. It’s like winning a gold medal.” 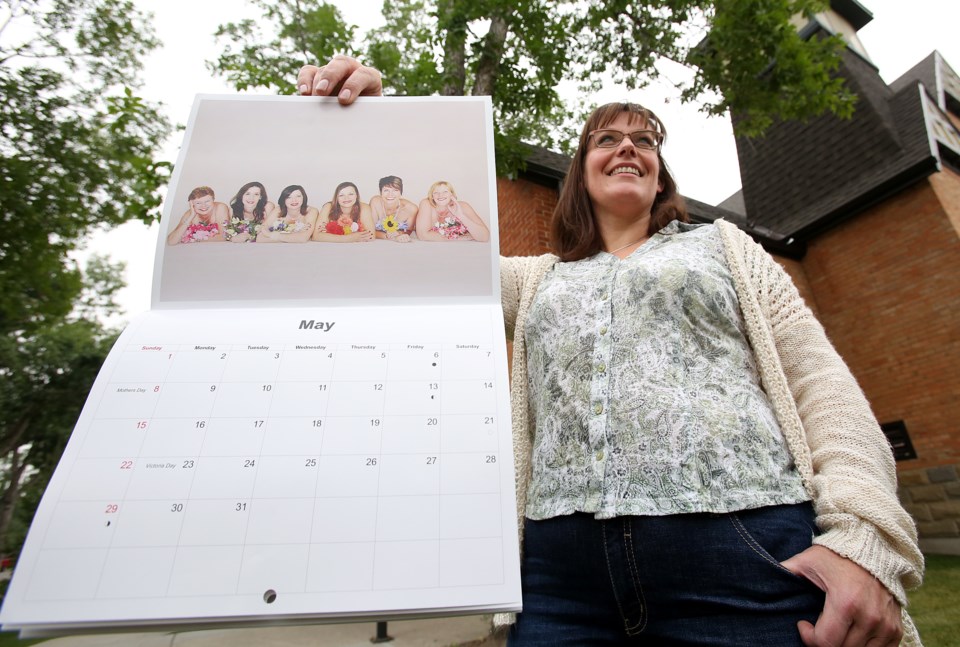 One of the golden plays was Calendar Girls, which was done in 2015 at the RPAC.

“My favourite role was I played Chris in Calendar Girls, which was quite a departure for Dewdney Players,” Payton said. “It was about a group of women in the UK who did a nude calendar to raise money (for cancer)."

The Dewdney actors did a photo shoot for the play. A touching, tasteful calendar was created by Dewdney, which was sold and raised approximately $5,000 for the Foothills Country Hospice.

“The whole group, we were so close, it was the perfect team,” Payton said. “Being on stage with those friends, was definitely one of my highlights.”

A keen eye from director Sherene Seders made sure the actors were nude, not exposed.

“We were unclothed up there but it was all tastefully hidden by flowers, cakes, tea sets, there was absolutely nothing shown,” Payton said. “I remember the director running around the RPAC just to check that nothing could be seen from any angle.

“She worked hard to make sure there was no nudity on stage.”

It may be the men’s turn in a while.

A production of The Full Monty could be coming down the pipe for Dewdney in the future.

A passion for theatre led to two former Dewdney members finding a passion for each other.

“In 2003, I was part of a play called When We Were Married,” said Barry Crane. “And in the play, myself and my new wife, Christine, Christine Pearson at the time, were cast as husband and wife in the play, and by the time we finished production we were dating.

“Two years later we were married.”

Christine didn’t know what to expect, she was jumping into acting for the first time since dabbling a bit in high school.

“That was my first time really acting,” said Christine, who presently teaches science at Oilfields High School. “I had just moved to Okotoks and I saw an advertisement in the paper, I thought, hey this looks cool.’”

The play was sort of an ensemble piece with the soon to be Cranes rotating the leads with two other couples.

“Barry was my husband in the play and we hit it off right off the bat,” Christine said. “I knew he was in construction and he came over and helped me finish off my basement.

“My dad joked with me: ‘You know, you aren’t really married.’”

The couple weren’t supposed to date prior to the play ending, but they did break that rule once or twice.

“He just made me laugh.”

Barry, the Turner Valley mayor, was an actor growing up in Newfoundland. He said he felt there was a spark right away.

“Whenever, I read script with Christine, I always added a little extra,” he said.

The future looks bright for the theatre group.

“At the last AGM we welcomed two new board members and for Anne of Green Gables we have pretty much a brand-new cast,” Payton said. “We have new people coming in all the time.

“There is always lots of new blood coming in.

“If you want to get involved backstage you are always welcome, that is the part we often need new people.”

The love for theatre has to be there.

The hours that go into putting on those seemingly seamless productions are huge.

“We pride ourselves on how good our productions are, a lot of people think we do this all the time,” Payton said. “Almost everybody has a full-time job, as well as going out and rehearsing at night and putting on a show.

“Normally we rehearse three times a week for three months. It takes a lot of time... It is absolutely like a part-time job.”

They also put the real meaning of community in community theatre. Besides the Foothills Country Hospice, Dewdney has donated to STARS, Field of Dreams did a benefit for Fort McMurray and others.   For more information about the Dewdney Players go to dewdneyplayers.com

The Dewdney Players were considering a name change prior to the announcement that Edgar Dewdney was linked to atrocities with First Nations people.

“People think that we are professional because the name doesn’t say we are a community theatre group,” said Dewdney Players president Nicola Payton. “We had been talking how to get people to understand that we are a non-profit.

“Then obviously when town council was speaking of renaming the (Dewdney) park, which we were named after, it seemed like an ideal opportunity to change and bring in the word ‘community.’

“The question of when we will change the name will come up at the next annual general meeting.”

The theatre group was not named after Indian Affairs commission Edgar Dewdney, but after Dewdney Park, where the Station, where the present Okotoks Art Gallery is located. The Dewdney Players initially did performances there.

As well, Okotoks was once called Dewdney in the late 1890s. The name was switched back to the village of Okotoks in 1897 when it was discovered there was already a “Dewdney” in western Canada.

Edgar Dewdney was the former Commissioner of Indian Affairs and Lieutenant Governor of the North-West Territories, taking office in 1879. His policies including withholding food rations to force Indigenous People on to reserves.

The territory included Alberta, Saskatchewan and a portion of B.C.

Regina city council changed the name of its Dewdney Park to Buffalo Meadows in April.

The renaming of Dewdney Park in Okotoks will be on council’s agenda in the future.

Payton anticipates a name change for the theatre group.

“This all blindsided us, but we can do better now,” she said.