Your best meals for the best deals

Newcomers to Okotoks often remark on just how many restaurants there are in town. From fusion to sushi to Vietnamese and French, the diversity in culinary options is astounding.
0
Feb 2, 2011 12:00 AM By: Okotoks Western Wheel Staff 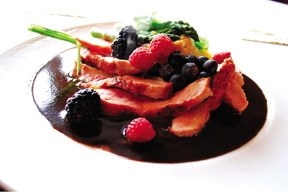 The Duck Magret with Saskatoon Berries is a taste explosion created by French chef Nicolas Desinai at Bistro Provence.

Newcomers to Okotoks often remark on just how many restaurants there are in town.

From fusion to sushi to Vietnamese and French, the diversity in culinary options is astounding. In fact, the Town’s business directory lists more than 70 eating establishments.

When hunger strikes, who has the time to navigate the myriad of dining establishments scattered throughout town?

Hunger no more, the solution is here.

The following is a dining guide to restaurants in Okotoks. Categorized by price, these are just a few of the best meals you can get for the best deals in town.

Can’t decide between sweet or salty? The 1990s Harvest at Cora’s is the “best of both worlds,” according to co-owner Jarom Moriyama.

A sweet cinnamon brioche dipped in French toast batter serves as the main portion of this tasty breakfast, complete with an egg and three strips of bacon. The balance between sweet and salty is the most appealing part of this dish.

A side of fresh cut fruit, including cantaloupe, strawberry and pineapple, is also included.

Made with free-range chicken, decadently rich triple cream Brie, tangy sundried cranberries, toasted pecans and topped with Brasscia Cranberry Mustard Mayonnaise on a tortilla, the chicken quesadilla at Gourmet on the Go is fast becoming a lunch-time favourite for many Okotokians.

Owner Michelle Albert said she can’t keep count of how many times customers have ordered the dish.

“The mixture of flavours is I think what appeals to customers the most,” she said.

Gourmet on the Go specializes in gluten-free options, so guests can choose between either a flour or rice tortilla for their quesadilla. A side of tossed greens with your choice of vinaigrette is included for a healthy kick and pop of colour.

“Hands down, the best selling lunch and dinner item is the Chicken and Brie Sandwich,” said Ronald Swartz, co-owner of Heartland Café.

Prepared by head chef Beverley Pell, the sandwich is made entirely from local ingredients.

“The locality of the ingredients, the freshness and the homemade everything is what customers like the most,” said Swartz. “We only bring in raw produce, so everything here is made from scratch.

Swartz said the Bison Meatloaf is a close second in popularity at the restaurant, and worthy of a special mention.

The meal includes two slices of bacon-wrapped, mushroom-stuffed bison, served with house made tomato-peach chutney, roasted garlic aioli, sliced red onions and lettuce. The meal also includes an in-house oven-baked bun on the side. At only $15, this is heart-warming comfort food at a steal.

Both dishes come with a choice of side, including Yukon gold potatoes, Caesar salad, a cup of soup, or organic mixed greens.

What happens in Vegas usually stays in Vegas, but that’s not the case for customers who frequent Yokozuna Sushi in Okotoks, located at 200 Southridge Dr.

People love the Las Vegas roll and can’t seem to keep it a secret, as the meal is fast becoming one of the most commonly ordered dishes at the popular restaurant, said Sun Jo, owner of Yokozuna Sushi.

“People seem to like the cool combination of vegetables and the taste of the tempura,” Jo said.

Okotokians clearly have a taste for sushi. Jo said business has been booming at the restaurant, which first opened two years ago.

Decadent deals for $33 or less

This is as authentic as French fare gets. In fact, chef Nicolas Desinai hails from Brittany, France.

The Duck Magret with Saskatoon Berries gets rave reviews from customers, Desinai said.

Served on a bed of Saskatoon berries and jus, raspberries, blueberries, a potato pancake, steamed asparagus, carrots and other mixed vegetables, the duck at Bistro Provence is a dish of which Julia Child would be proud. C’est trčs delicieux!

“When people think of duck, they often think of really dry meat,” said Desinai. “But the secret is to not cook it for too long. This keeps it moist and tender inside.”

With a new owner and recently renovated interior, Bistro Provence is like a trip to France, but for a fraction of the cost of the plane ticket.

Got a craving for wholesome comfort food? Chef Darren Nixon of Café Divine has you covered.

The biggest seller on their dinner menu is the Braised Shoulder of Bison. This incredibly tender meat is slow-cooked for between four and five hours, braised in a jus and red wine with Saskatoon berries. The bison is then served over mashed potatoes from Poplar Bluff farm near Strathmore, along with a side of roasted vegetables from local farms.

“It’s got a comfort feeling about it,” Nixon said. “As a chef, I really like braising because I like comfort food. The end result is flavours that are really warm.”

Nixon said another popular lunchtime favourite is the Asian Noodle Bowl, which goes for $14.25.

Made with all natural roasted chicken, Nixon said this is a heart-warming Asian broth full of ginger, some chili “for a bit of heat,” vegetables, and glass noodles.

“That one has been massively popular for years,” Nixon said. “I just don’t think you find natural ingredients like that in a broth anywhere else.”