What's on Tap this weekend 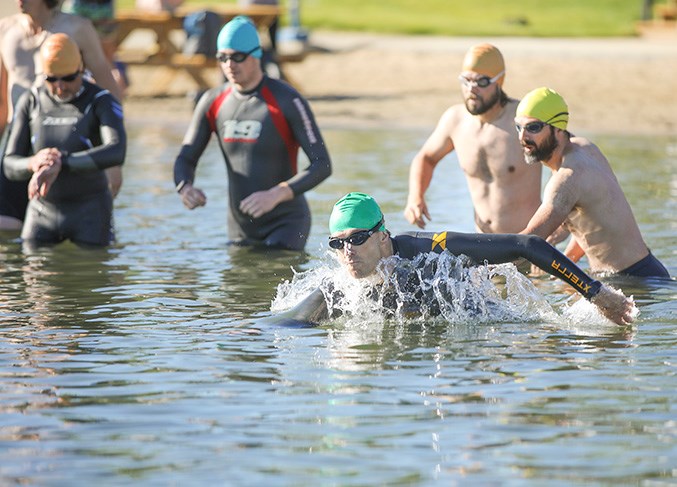 The male competitors of the Natural High Triathlon take to the water at Crystal Shores Lake in 2018. (Wheel File Photo)

The sprint distance, Tri-It distance and kids races all start and finish at the Crystal Shores Lake.

The triathlon gets underway at 8:30 a.m. with the women’s sprint distance starting off the race. The kids races get going close to 11 a.m.

Following the race, organizers are holding the charity barbecue featuring offerings from Okotoks Sobeys, COBS Bread and Big Sky BBQ. The food is free to all triathlon participants and for spectators costs just a minimum $5 donation.

Performance in the Park

Bring your picnic blanket and snacks and make your way to Drake Landing Park as it transforms into a pantomime theatre for the weekend.

Goodger-Pink Family Theatre is delving into the imagination of an 11-year-old girl with the play Win the Warrior: A King Arthur Tale. In the event of inclement weather, performances will be held at Alberta Dance Academy.

Sit back and enjoy the sounds of Winnipeg folk and country musician Richard Inman. With his rich baritone voice and delicate musical touch, Inman crafts mature songs that feel deeply familiar and fresh.

Best of the Best

The tournament features the top talent in the country, with six teams vying for the national crown. The field includes Team Alberta, two teams from Ontario along with provincial teams from British Columbia, Quebec and the Prospects Team.

The round-robin portion will predominately be played out of Tourmaline Field before the action on Sunday concludes with the medal games at Seaman Stadium at 1:30 and 4 p.m. followed by closing ceremonies at 6 p.m.

Tickets are available in person from the Dawgs business office or by calling 403-262-3294.

For full information go to seniorwomen.baseball.ca