Vikings from across Alberta will get loud and rowdy at a honey farm west of Okotoks, looking for more than award-winning mead.
0
May 9, 2018 12:00 AM By: Tammy Rollie 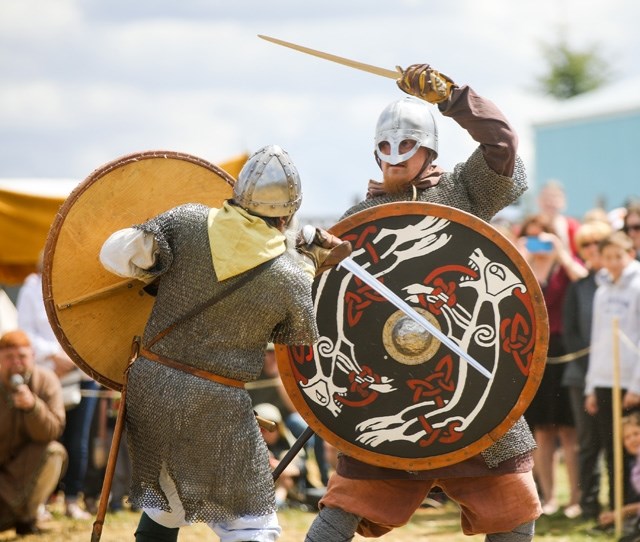 Vikings from across Alberta will get loud and rowdy at a honey farm west of Okotoks, looking for more than award-winning mead.

Members of the Viking Vinland Society will be armed with swords, spears, axes, and bows and arrows as they offer both education and fun in the Chinook Honey Company’s Horde at the Hive event May 12 and 13 from 10 a.m. to 5 p.m.

The honey and mead-producing farm has offered the event since 2016, drawing as many as 1,000 people daily, says Chinook Honey co-owner Cherie Andrews.

"It’s a huge living history lesson about their lifestyle from the different crafts they did to learning about beekeeping in that era,” said Andrews. "They do battle re-enactments and research on the culture.”

The history of the Vikings fits in perfectly with Alberta’s first honey winery due to its production of award-winning mead, said Andrews.

"Mead is the oldest alcoholic beverage dating back to 7,000 BC at the very least,” she said. "It played a huge role in Norse culture. The mead was used prior to battle to bring their bravery up and after battles as a celebration or commiseration if they lost.”

A Viking village will be set up to allow visitors to not only cheer on battle re-enactments, but to browse an artisan market featuring hand-made pottery, costumes, carvings, leather work and jewelry.

President of the Vikings Vinland Society, Warren Cummins, said all of the Alberta Viking groups have been invited to provide the living history re-enactment experience.

"Everybody will be dressed in Viking-age clothing that’s been authentically researched,” he said. "We will demonstrate period crafts and the lifestyles of Vikings like woodworking, blacksmith, textiles, cooking, storytelling and archery.”

"Most people think Vikings are raiders wearing big-horned helmets running around carrying big axes,” he said. "We try to dispel the myths and mystery around that. It was a pretty healthy thriving culture that happened in a probably 600-year period.”

Cummins sees Horde at the Hive as an opportunity for the public to dispel those myths while engaging in Viking culture.

"First and foremost we’re a public education association,” he said. "Our goal is to educate the public on what we know today to rebuild that culture and show people what life was like in those days. It’s so largely unknown and people are intrigued by it.”

New to Horde at the Hive this year is a mead competition where 50 hobby mead-makers from across the province will submit their concoctions to be judged by a panel of six judges on May 12. Chinook Honey will present gold, silver and bronze each in six categories: traditional, melomel (fruit), methaglin (herbs and spices), sparkling and specialty.

"These mead-makers are so dedicated,” Andrews said. "They put a lot of TLC into their products. Some of them start off making their own beer or wine and have fallen in love with mead because it’s so popular.”

Also new this year is demonstrations by the Mounted Combat group from Irricana, which will showcase its sword-handling skills atop horses.

All events are free. For a fee, visitors can take a bee tour to learn all about bees from the ground up including hive behavior, structure and basic beekeeping and a meadery tour to see how the sweet elixir is created.

To learn more go to www.chinookhoney.com