Three string masters hailing from Toronto are heading west to Okotoks to celebrate the release of their double album a little prematurely.
0
Apr 4, 2018 12:00 AM By: Tammy Rollie 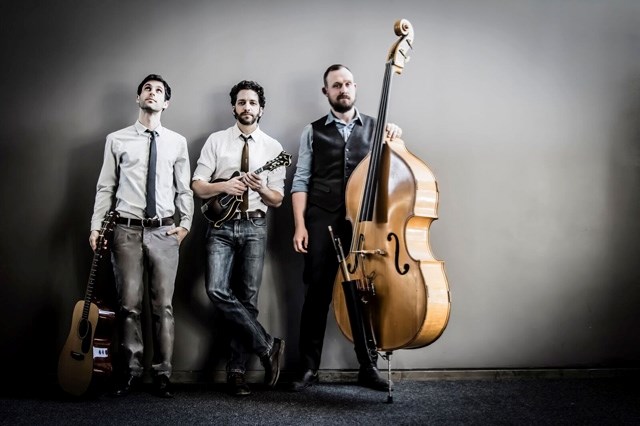 The award-winning Andrew Collins Trio will perform at the Rotary Performing Arts Centre April 6 at 7:30 p.m.

Three string masters hailing from Toronto are heading west to Okotoks to celebrate the release of their double album a little prematurely.

The Andrew Collins Trio, five-time Juno nominees and seven-time Canadian Folk Music Award winners, is bringing its array of bluegrass, folk, jazz, classical and swing music to the stage at the Rotary Performing Arts Centre April 6 at 7:30 p.m. as a pre-release tour for its double album Tongue & Groove.

Collins said the Tongue component of the double album features vocals while Groove is all instrumentals in this unique combination.

“Our first album had a couple vocals, the last one was all instrumental, yet our show is a third to a half vocal stuff,” he said. “I wanted to go a different direction.”

“Our whole thing is drawing from these different styles,” he said. “The last album was this concept album of trying to tell a story with instrumental music.

“We are always trying to come up with a concept that the albums have some kind of focus rather than just a collection of tunes.”

“It’s a lot of original material and stuff that I’ve written,” he said. “It’s evolving.

“We’re trying to get better, trying to push ourselves.”

When it comes to writing music, whether it’s vocals or instrumentals, Collins said it’s about going back to their roots and embracing their influences.

“Rather than having this overarching theme connecting the instrumental music it’s really just trying to have the original stuff be more obvious from the influence with which they come,” he said.

“It’s a fusion of whatever influences we’ve had. It’s about exploring and trying to find new songs from a lot of similar styles of music like bluegrass, classical and Celtic music and anything that occurs to us.

“It’s a lot of improvising rather than heavy composing and it’s really looking at the influences that brought us where we are.”

“Our music is so eclectic that it has a uniqueness to it,” said Collins.

The trio has been together for six years. Collins met Mezzatesta while playing a gig in Toronto when Mezzatesta approached him asking for mandolin lessons, but Collins said it was obvious he didn’t need lessons.

In fact, Collins was so impressed with his ability to play the mandolin that he suggested they play together next time Mezzatesta was in the city.

A few months later, Mezzatesta moved to Toronto and the two began pairing up on stage.

Collins then met McEleney at a recording studio while he was playing for the band Unseen Strangers and was impressed with his musicality.

“He’s a really amazing bass player and singer and we hit it off right away,” Collins said.

When the three came together as the Andrew Collins Trio six years ago, it was the perfect fit.

“We work really hard together, travel well together,” Collins said. “It’s all my material so I’m definitely the band leader, but they are super intelligent, wonderful players with great ideas. We are good friends.”

When it comes time to perform on stage, Collins said the trio is known to improvise, often changing instruments. They also have a gift of the gab.

“There is a lot of humour in the show, as well as a lot of stories and jokes that are connected to where the music comes from,” Collins said. “There’s a lot of instruments changing hands so I play mandonlin or guitar and we do some twin fiddle stuff.”

Tickets to see the Andrew Collins Trio perform cost $25 in advance or $30 at the door. Tickets can be purchased by calling 403-938-3204 or online at www.okotoks.ca