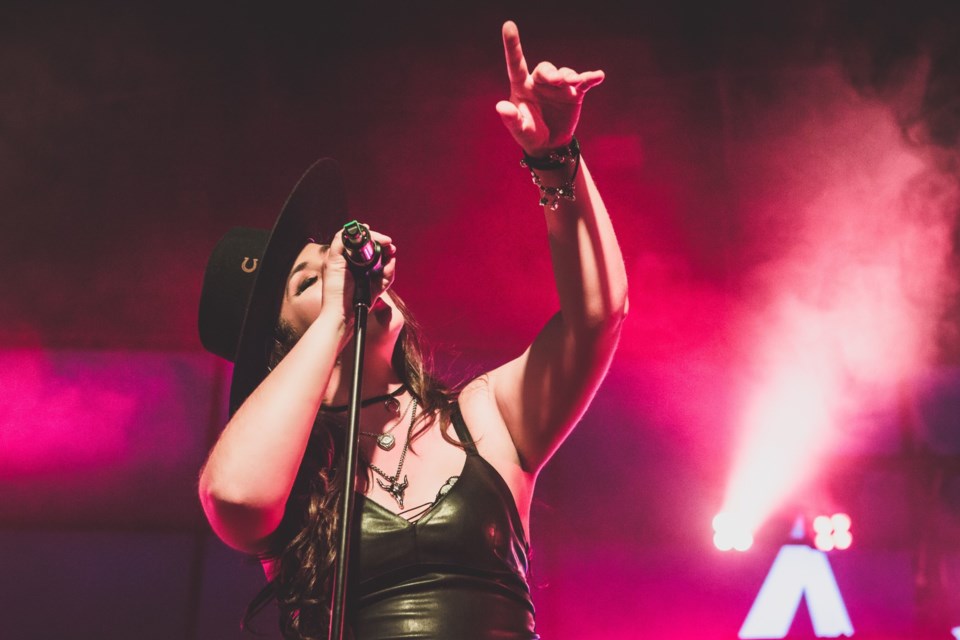 Okotoks’ own rising star will rock the stage at the Greatest Outdoor Show on Earth next week.

Country singer/songwriter Michela Sheedy will join the ranks of talent on the Nashville North stage, opening for 2018 CCMA Songwriter of the Year Aaron Goodvin on July 10 at 4 p.m., 6 p.m. and 8 p.m. She's also singing the national anthem at the rodeo at 1 p.m. July 5, 6 and 9.

“I have over 20 shows booked throughout the Stampede, but the most notable performances are Nashville North on July 10… and the King Eddy on July 13,” said Sheedy, referring to the King Edward Hotel. “I played the Nashville North stage before, but only during their Nashville North Star competition where I had fallen short of winning the grand prize.”

Sheedy roped the gig through building connections and working hard on her artistry.

“I am so excited to come back as a more permanent fixture of the Stampede,” she said. “I am coming back so much more confident - less of a girl, maybe a bit more of a woman. I am looking forward to coming back and taking the stage with my band and showing people the real me.”

Fans can expect a mixture of Sheedy’s Stampede favourites like fan favourite I Ain't Here to Talk and her single I Make Bad Look Good, new originals and a few surprises up her sleeve.

“The Stampede holds such a special place in my heart,” she said. “I’ve grown up playing at the event and it’s crazy to see my evolution and also the evolution of the festival.”

The 24-year-old will be backed by some great talent.

“I have an amazing band that I have been working with for the past year - the best of the best in the area and we are ready to bring our A game,” she said. “Playing the Nashville North stage is like no other. It's like the biggest house party you've ever seen. You are able to pick out some familiar faces from the crowd and celebrate the Greatest Outdoor Show on Earth with old friends and new friends.”

Sheedy is not new to the Stampede, having participated in its talent search for four years.

She was also a finalist in the Ponoka Stampede Talent Search and the 2015 and 2016 Nashville North Star competition, and was second runner-up in the 2016 Country 105FM’s Rising Star Talent Search.

For the second consecutive year, Sheedy is a Top 12 finalist in the Project Wild/Wild 953 artist development program, which is designed to develop and launch the careers of up and coming artists in Alberta.

This summer, she will receive a $5,000 development award, participate in Project Wild’s one-week intensive music industry boot camp to further her performance, songwriting, marketing and business skills, and will compete in showcase series where three winners will be selected to receive cash prizes.

“I am so lucky to have been chosen to participate for my second year in a row,” she said. “I believe that this year is the strongest that the program has seen in terms of top 12 members and I am ready to learn as much as I can and take a stab at winning some money. I am so humbled and blessed to be able to take another shot at this opportunity.”

“I have not played Klondike Days before so I am excited to play for the first time,” she said. “I have played Big Valley Jamboree once before in the VIP tent, but this will be my first time playing at the songwriters tent.”

These opportunities are propelling Sheedy further into a burgeoning future in the country music industry.

“I was so green as an artist and it’s sometimes funny looking back on my previous performances and seeing how far I’d come,” she said. “I wasn’t comfortable in my own skin and I had no idea who I was up there.”

Sheedy is taking every opportunity by the horns and keeps her fans wanting more.

“I am currently writing as much as humanly possible in hopes of releasing new music very soon,” she said. “This year has been a year of growth and self-discovery. I hope to come back with stronger music and as a stronger artist.”