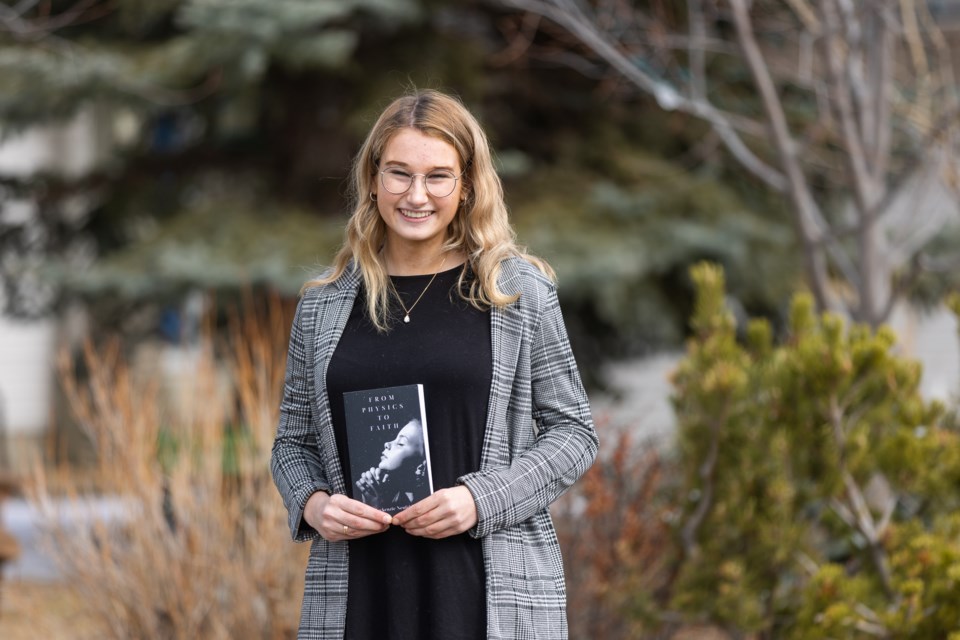 First-year physics and philosophy student Mackenzie Neufeld wrote the book From Physics to Faith, which is about her personal growth and finding relationships between religion and science.Brent Calver/OkotoksToday.ca

Scientists need to have faith in their physics. And sometimes, physics can lead to greater faith.

Mackenzie Neufeld, a Holy Trinity Academy 2020 grad, has written and published From Physics to Faith, which deals with her passion for science and religion.

“The more physics and philosophy I wrote about the more I realized that it has a connection to faith, religion and God,” Neufeld said. “I always thought of physics as a hard scientific concept, not really spiritual or philosophical.

“I call it From Physics to Faith because the spiritual aspect of science led me to faith and to God. The more you think about scientific concepts and physics the more ‘why’ questions you ask.”

Neufeld, a first-year philosophy student at the University of Alberta, began writing the book as a 16-year-old Grade 11 student at HTA. It was originally entitled Physics and Philosophy From a 16-year-old.

The concept all started with a Big Bang.

“It was more thinking of the Big Bang and the evolution of the universe – what’s before time itself, does time have a beginning, really philosophical questions that aren’t scientific at that point," she said.

Neufeld delved into science when she entered high school at HTA. Science led to a stronger relationship with God.

“It’s a common misconception for people to think science and religion are in conflict with one another,” Neufeld said. “I hope my book shows that they actually complement each other.

“I used to think science and religion couldn’t co-exist.”

“I like to call them my guardian angels because they helped me so much in high school,” Neufeld said of Dickie, Paulgaard and Gay. “I started writing my book so I could express my ideas for Mrs. Paulgaard. I was always so bad at asking so I wrote them down.

Neufeld would bounce ideas off Gay.

“Mr. Gay introduced me to the religious side of science,” Neufeld said. “Whenever I came at him with scientific questions and with parts of my book to show him, he always sort of went: ‘What is deeper than this? What can be explained instead?

“It led me to realize there is a power that can’t be explained – beyond scientific method.

“That is where religion and faith got linked.”

Dickie was Neufeld’s physics teacher – as well as the high school cross-country coach.

“He was my coach and my physics teacher and I clicked with him automatically,’” she said. “I had all these physics questions… He always helped to me to think deeper, less in the religious sense but more of the physics sense.

“It worked out well to help dig deeper scientifically like Mr. Dickie and religiously like Mr. Gay.”

Her faith is evident quickly in the book.

She added some jarring opening chapters dealing with her mental health issues, depression, lack of self-worth when she initially enrolled at the University of Alberta in the fall of 2020.

“That was one of the last things I put into the book,” Neufeld said. “The reason I did that was I felt it would be a lie if I didn’t.

“There is a part of me that struggles, I didn’t want to portray myself as someone who has everything sorted out.

“I wanted to act as an inspiration for other people struggling too.

“Physics and faith are not only my passion, but are things that gave me purpose in life and they helped a lot in my mental health struggles."

The fourth dedication in the book is to the U of A campus chaplain, Theresa Robinson.

Robinson helped Neufeld with her mental health struggles while at U of A.

"She is a saint," Neufeld said.