Oilfields School where the pirates Arh! 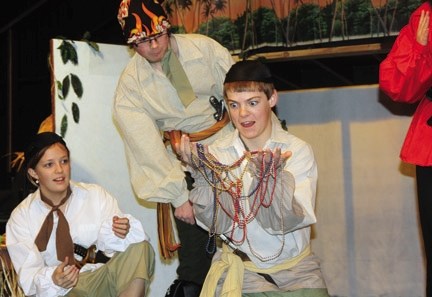 Riches are found during a rehearsal of the Oilfields High School&#8217;s production of Treasure Island showing this Thursday through Saturday in Black Diamond. From left: Reba Morgan, Marcus Peiritsch and Leigh Oulette.

Luckily for him one of his characters goes to that great pirate ship in the sky early in the play eliminating the need switch his costume back and forth throughout the production which begins Thursday and runs through Saturday, Jan. 29.

“My first character, Captain Bones, is a drunken pirate who stole one of the main pirate’s maps so people are trying to kill him,” Treadgold revealed. “He dies then I come back as a leader of the pirates, Long John Silver.”

With Hatred Burns Hope Treadgold has recorded in professional studios and played many live gigs, experiences he acknowledged which help to ease his butterflies when it comes to acting on stage.

“I am used to being if front of an audience,” he said.

Oilfields High School drama teacher, Manda Kaasten, is the one responsible for selecting the Robert Louis Stevenson literary classic “Treasure Island” for the stage. It’s the story of young Jim Hawkins, an innkeeper’s son, who obtains a treasure map and then gets tangled up with a bunch of cutthroat pirates led by the aforementioned Long John Silver.

With so much action in its story, Kaasten revealed the show was a perfect fit for her current crop of junior high drama students and this spot on her drama schedule.

“Our Grade 8 and 9 students, they have so much energy. Their activity levels are a little over the top,” she explained. “I wanted to do something very different. I just produced the musical “Guys and Dolls” prior to doing this one. This is the complete opposite. We had a musical New York thing going on before Christmas and now we have this show with treasure, pirates and Irish jigs show to start the year. Because I have so many rambunctious boys and girls with a lot of gusto they really wanted to do this pirate thing.”

Kaasten accommodated the requests of many of her female performers who wanted to step away from parts originally intended for girls or women. Some of the girls play cutthroat pirates and there are others, originally cast as villagers, who successfully lobbied to play male townsfolk instead of females.

Grade 9 student Kaylene Lillico didn’t go that route. Instead she landed the role of a woman with some serious responsibilities.

“I play Auntie Nan,” she said. “I am looking after the characters Jim and Laurie and I am running the inn.”

One who enjoys performing, Lillico has taken to the Oilfields stage before including “Beauty and the Beast” and “Charlotte’s Web.”

Not one to shy away from a significant part, Lillico brought much of the dramatic centre to the latter production as the title spider, Charlotte.

The actress’s role in “Treasure Island” is only part of her family’s significant contribution to the play. From the pirate finery of Captain Long John Silver to the time period accurate clothing of the villagers, Lillico’s mother made all the costumes for the show.

“Treasure Island” tickets for the Jan. 27 through 29 performances are available at the door at Oilfields High School in Black Diamond. They’re only $5 or a food bank donation. The curtain rises on the show, suitable for all ages, each night at 7 p.m. A special loonie matinee goes Thursday at 1 p.m.