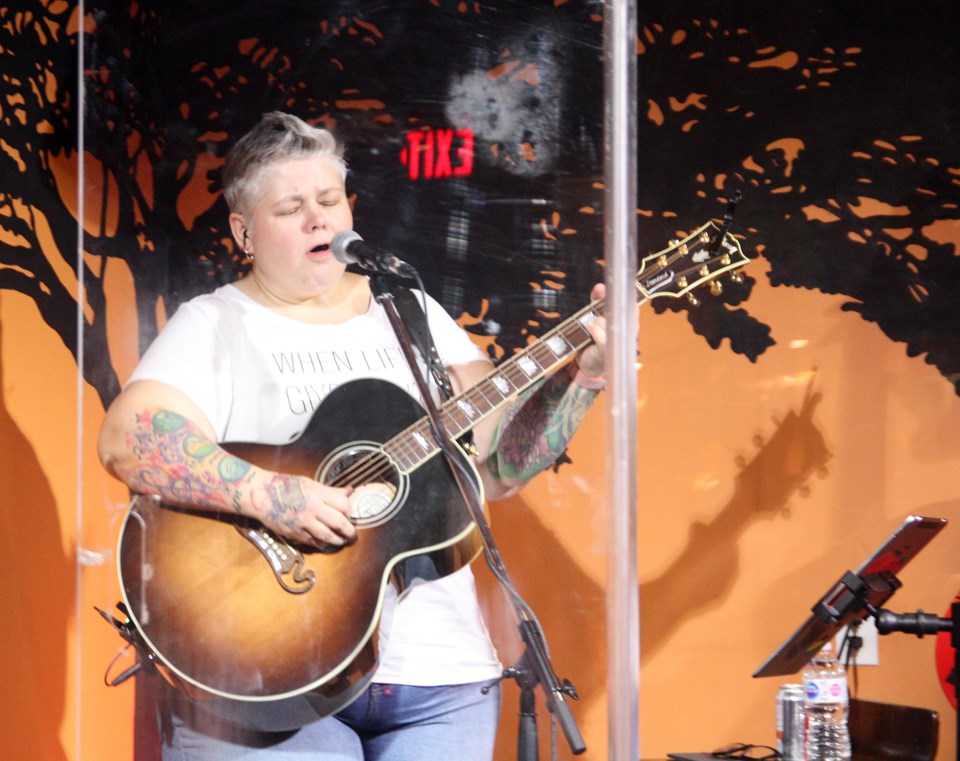 Amy Bishop performed behind a Plexiglass shield for her concert at Tribal Connection Market on Oct. 24 in Okotoks. (Bruce Campbell/Western Wheel)

A performer was delighted not to get the thumb’s up for her singing at a sold-out performance in Okotoks on the weekend.

Amy Bishop told the audience it was nice to hear actual applause at Tribal Connection Market on Oct. 24 rather than the thumb’s up symbol she has received during the many online performances she has done since the COVID-19 pandemic began.

She’s glad to be back on stage.

“I still need to play and I still love to play,” Bishop said. “This fills me up spiritually, it fills me up with art, music.”

Bishop’s Oct. 24 performance was only the second Tribal Connection concert since March. Its first was the night before when Jay Burns, Steve Pointmeier and Joey Pringle took the stage.

“Awesome,” Jodi Loverin, co-owner of Tribal Connection, said of finally having live music. “All the customers and everyone was so receptive – they were so looking for an outing.”

Tribal Connection opened on May 14 after closing its doors in mid March due to COVID, but it took five months before getting the go-ahead and the protocols in place for live entertainment.

The coffee shop on McRae Street has a cozy atmosphere with a seating capacity of 67 people during normal times. Under the new normal, it’s still cozy, but the maximum is 33 people and those in the audience are kept two metres apart unless sharing a table with a cohort.

As well, the performers either wear a mask or sing behind a Plexiglass shield.

“Bullet-proof shield, I call it my Popemobile,” Bishop said with a laugh. “Here it is really good, the lighting is good  There’s some places where there’s a light behind the glass with me. All I can really see is me in the reflection.

“And I am enclosed, so I can’t really hear the audience.”

While delighted to be back on stage in front of a live audience, the forced smaller crowd makes for a smaller paycheque. Ticket sales go towards the artist’s pay.

“There were three or four months there where I didn’t have anything,” Bishop said. “It is still hard. Even though I am able to play it is about a third of the pay. I am looking for a part-time job to supplement my music habit.”

Okotokian Sally Zerk was attending her second concert since live music was silenced in March.

“This is really good, fun and Amy is phenomenal,” said Zerk, who has been getting her music fix from radio the past few months. “This is such a nice social thing to hear live music.”