An Okotoks senior frequenting retirement and long term care facilities with his six string in tow is putting smiles on the faces of his peers.
Aug 29, 2018 8:56 AM By: Tammy Rollie 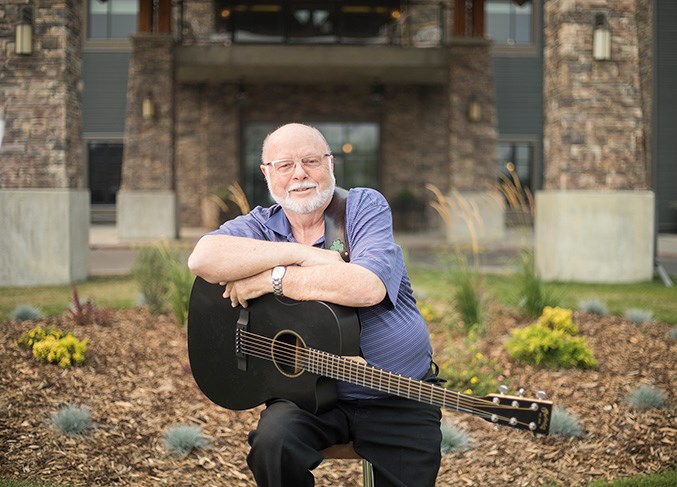 With his guitar in tow, Dave Megaw is a frequent visitor at retirement and care facilities throughout the Foothills, bringing a smile to the faces of its residents.

An Okotoks senior frequenting retirement and long term care facilities with his six string in tow is putting smiles on the faces of his peers. Seventy-seven-year-old musician Dave Megaw has become a familiar face in up to a dozen facilities throughout the Foothills, getting residents tapping their toes or waltzing with their partners as he performs old country classics like Sweet Caroline along with traditional Irish medleys. “It keeps you on the go and keeps you feeling good,” he said. “You get a lot of good out of it.” While Megaw has been singing most of his life, he’s never pursued music as a professional career. Rather, in the 40 years he’s lived in Okotoks Megaw has performed at churches, jam sessions, sang with the Okotoks Men’s Chorus and even played guitar and sang during Dewdney Players Group Theatre’s production of Lafferty’s Wake last year. In his retirement, Megaw is entertaining seniors in long term and retirement homes like Seasons High River for its Thursday night jam sessions. “You get a couple of six string guitar players and you get a couple of people who are really good at the piano,” he said. “You get six or eight different people and each one takes turns and sings a song.” Megaw said he performs the last Thursday of each month at Sandstone Lodge and visits Rising Sun Long Term Care in Black Diamond Tuesday mornings. He also performs at The Heartland in Okotoks and in the High River Hospital on occasion. “I play what people like,” he said. “It’s generally older country classics and I’m Irish so I play some Irish music that goes over well. Sometimes I will do a bit of a kazoo for a bit of fun – they love it. It surprises them the first time it happens.” At Tudor Manor in Okotoks, Megaw performs for the ice cream socials, birthday parties, Father’s Day pub night and for residents suffering from dementia, singing golden oldies to appeal to the interests of the residents. “They don’t know their name or where they are, but they know the words to these songs,” he said. “A lot of them are in a wheelchair with their heads hanging down but their foot is tapping.” Sherry Little, therapeutic recreation and volunteer services manager at Tudor Manor, said Megaw brings a lot of pleasure to residents. “He brings such positivity and joy and he gives so much of himself even beyond his music,” she said. “The impact he has is immeasurable. The therapeutic benefits of his music is far reaching beyond words can say.” Among those most impacted are the residents suffering from dementia in Tudor Manor’s Memory Care, said Little. “We really see that therapeutic benefit come out,” she said. “The music just stimulates the memories from years gone by and brings such smiles to their faces. Seeing them sing along and not miss a word is special.” Megaw is also a much-anticipated visitor at Sandstone Lodge, according to its recreation coordinator Arlene Krentz. “He can get them going and there is nothing but good times and giggles when he’s here,” she said. “He plays everything from Edelweiss to Puff the Magic Dragon. There is always a song that gets lodged in their minds and it can last for days, really.” Having someone entertain in the supportive living facility for free is a rare occasion, said Krentz. She said he’s performed for Mother’s Day events as well as the food festival. “He is so generous with his time and talent,” she said. “I really do believe he gets just as much out of it as our people. He has his wife (Elizabeth) right at his side every step of the way. She sits quietly in the background and sings right along.”