Cody Follis' Classic Country Show in Turner Valley Sept. 8 could be his final performance due to the effects of the chemotherapy and radiation treatments.
0
Aug 31, 2019 3:00 PM By: Tammy Rollie 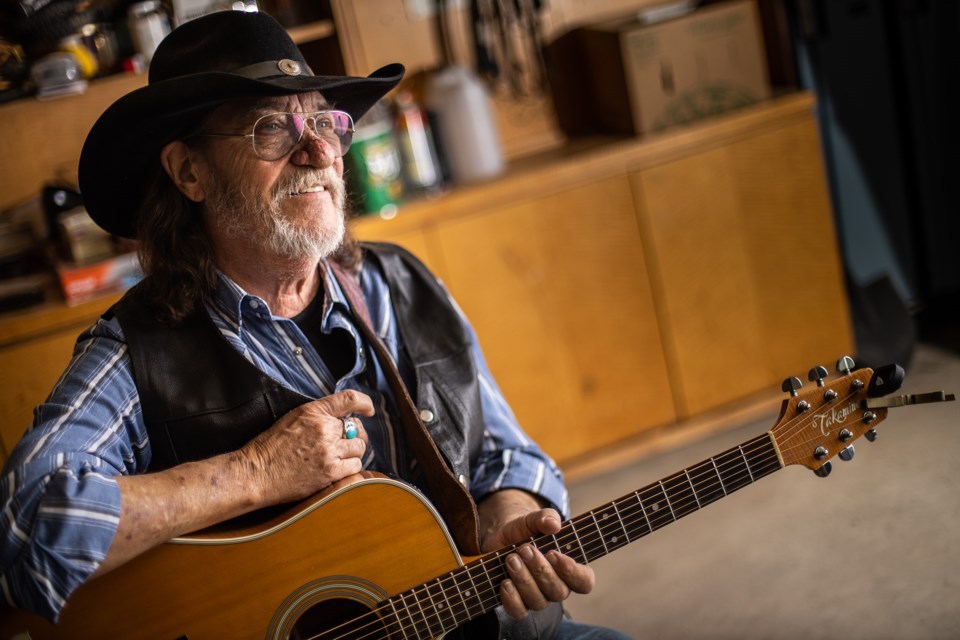 A harrowing battle with cancer has left a Longview classic country singer weak, yet he’s mustering up enough energy for what might be his last performance.

Sixty-six-year-old Cody Follis will be backed by family as he sings favourites by Willie Nelson, Merle Haggard, Ian Tyson and other old country classics from the ’50s into the ’70s in his Classic Country Show Sept. 8 at 2 p.m. in Turner Valley’s Flare ‘n’ Derrick Community Hall.

Son Robert Levesque will be on keyboards, daughter Suzanne Levesque on bass, son-in-law Craig Bignell on percussion and friend Bruce Hoffman on steel guitar and fiddle, with former lead player Wade Tutt as the sound engineer.

It was while listening to his 40-year-old recordings in his garage that Follis decided to step on stage once more.

“People have been asking me when I’ll play again,” he said. “I’m finally through the treatments and getting some strength back. I’m excited, but at the same time you also have the feeling of apprehension of, ‘Am I going to be able to do it and am I going to be adequate? Can I get back into shape by then?’”

Follis was diagnosed with colon cancer last summer and began radiation and chemotherapy treatments in August 2018.

“Every time they gave me a chemo treatment, within a week and a half I ended up in the hospital,” he said. “My body would shut down.”

When it was time for Follis’ final treatment, he refused.

“I basically had to say to them I couldn’t take another one, it would kill me,” he said.

The side effects were taking their toll on Follis.

While Follis hopes to get off his heart medication soon, he’s lost feeling at the end of his fingers, which makes picking a challenge.

He also struggles to stand for long periods of time, yet he didn’t want to see 50 years of playing music destroyed in one year.

“I wanted to do one more show,” he said. “It’s therapeutic to me in that it forces me to do it and it gives me a target to aim for. I’m going to make a good time out of what’s been a bad time.”

Preparing for the show has been a lot of work for Follis.

“Basically it’s about rebuilding my strength,” he said. “Believe me, I’m working like an athlete in training before they go for a competition. I’m training to get my strength back to be able to hold a guitar properly. We’re not sure yet if I can stand for that long or if I have to sit.”

Follis played solo bars and honky-tonks across Alberta and B.C. in the ’70s and ’80s. He was known as Longhaul in those days.

Before being diagnosed with colon cancer a year ago, he stuck close to home performing at the Longstock Art and Music Festival and hosting jam nights at Twin Cities Hotel.

Follis’ musical gift was realized at a young age. At 11, he was playing in an old blues bar in Vancouver and then regular gigs at YMCAs and dance parties in his teens.

It began with a love of electric blues and rock 'n' roll, and morphed into folk before Follis moved to Williams Lake in British Columbia in 1969.

“I never even heard country until I moved up to Williams Lake,” he said. “I didn’t like it at first. After a while it grew on me. In the 1970s I became infatuated with it.”

When Follis was laid off from a ranch in 1978 he hit the road as a classic country singer, performing professionally until 1989. He was sent to tour Germany for Air Canada in 1987 and Tourism Alberta to promote country music in 1988.

Follis chose to stay out of mainstream fame, yet he obtained a strong following. He turned down an offer from RCA Records to release two of his songs because he said they wanted to change the words for Okanagan Gold, about the beauty of the Okanagan, into an anti-Vietnam War song.

Follis said he put a bunch of money into a 45 that never made it to vinyl, but got plenty of airplay, nonetheless, across British Columbia and Alberta.

“People in Alberta were already hearing my songs before I came out here,” he said.

Tickets to attend Follis’ Classic Country Show cost $20 and can be purchased at Country Food Mart AG Foods in Black Diamond or by calling 403-558-3967.