Dozens of artists will converge on the quaint downtown Okotoks street on Sept. 28 in conjunction with Alberta Culture Days.
0
Sep 22, 2019 8:02 AM By: Tammy Rollie 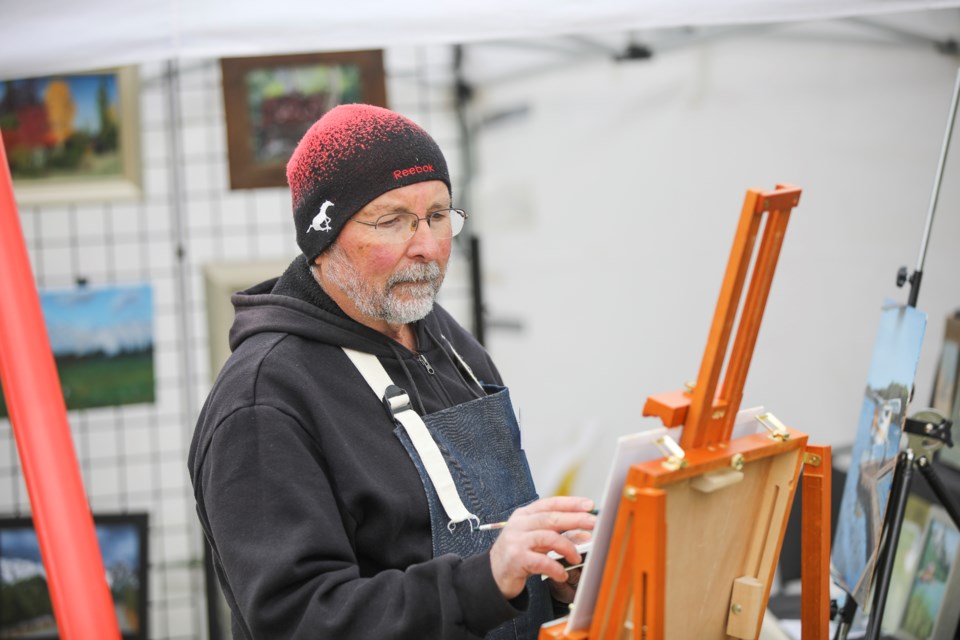 A quaint street in Okotoks’ downtown will be bustling with activity on Saturday.
About a dozen Elma Street merchants will celebrate the arts with exhibits, demonstrations and interactive opportunities in the heart of Olde Towne Okotoks in the second annual Elma Street ARTSwalk Sept. 28 from 10 a.m. to 4 p.m. in conjunction with Alberta Culture Days, which runs Sept. 27-29.
Janifer Calvez, one of the event organizers and co-owner of Lineham House Galleries on Elma Street, said the event is all about bringing the region’s wide array of artists to one street for a day of fun.
“That’s what we always try to do through Lineham House is bring in music and bring in all sorts of different kinds of arts and showcase the many different kinds of artists here,” she said.
The Elma Street merchants and local artists will offer a wide range of multi-sensory experiences including paintings, glass jewelry, intricate metal smithing, holistic arts, woodworking, fibre arts, photography, buskers, performing arts and cooking.
“There are so many artist down here, it’s great,” said Calvez. “It’s just bringing more of a profile to Elma Street and promoting Alberta Culture Days and the businesses here, too.”
In addition to all of the merchants returning this year, Calvez said participants can expect some new additions including two new art studios.
Birdsong Art Studio and Wellness Centre, operated by well-known Canadian artist Russell Thomas and his wife Heather, will feature Thomas’ colourful portraits, while wildlife artist Erica Neumann, whose work is displayed in galleries throughout western Canada, will have her own art and that of artist friends on display at her new studio, Neumann Studio, on Elma Street.
Lineham House Galleries invited a plethora of artists into its studio for the day representing fibre arts, glass jewelry, candle making and visual arts. Artists will offer demonstrations on glass bead making and wool spinning.
Back by popular demand is the make-it-yourself spice creations offered by local chef Mike Edgar, who will provide a variety of recipes to participants.
New to Elma Street ARTSwalk is the Elizabeth Street Improv group out of Studio Me, which gets adults acting up weekly as they develop skills around thinking on their feet.
Also new is a display of Blackfoot dresses in a First Nations cultural exhibit called Century of Style at the Stockton House. This collection of Pauline Dempsey Gladstone’s demonstrates exquisite design and beading craftsmanship of the First Nations people.
Dempsey’s daughter, Leah Koski of Okotoks, said the collection was passed down the family line to her daughter Alyssa. Mother and daughter are curating the exhibit.
Koski said her mother, who turned 90 this year, had run Century of Style for about 40 years before recently gifting it to Alyssa to take over.
Dempsey Gladstone was born on the Blood reserve by Cardston and was in a residential school in '30s and '40s. Included in the exhibit is a Dopey puppet from the 1937 Disney film Snow White and the Seven Dwarfs that Dempsey Gladstone was given as a reward for speaking the most English in the school.
Century of Style will be on display two days before the Sept. 30 Orange Shirt Day, which brings awareness around residential schools.
“Awareness is always very important for things that happened in the past like this,” said Koski. “We are very proud of our heritage and I’m trying to instill that into my children and their children and their children’s children to keep it going down the line. It’s the pride of having that in our heritage.”
Koski’s father, historian Hugh Dempsey, wrote many books about Blackfoot heritage and history, some of which will be on display. Koski’s parents met while Dempsey was editor at the Edmonton Bulletin and writing about Dempsey Gladstone’s father, who was Canada’s first Indian senator.
“It’s very interesting the history in our area with the Blackfoot tribe and… the last few years we’ve really been acknowledging the fact that this is Treaty 7 territory,” she said. “People want to know more about the details of the history and heritage of the native people.”