CHANGE OF DATE: Musicians and performers are invited to join the Okotoks Music Drive with music played from their own yards, porches, driveways or garages on May 24 from 1 p.m. to 3 p.m.
May 15, 2020 12:30 PM By: Krista Conrad 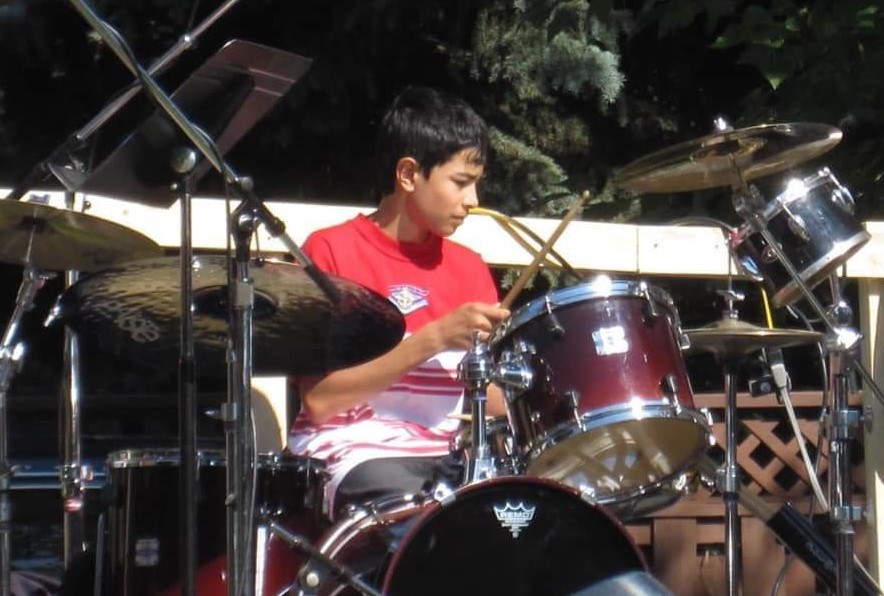 Sebastian Siqueira plays the drums during the Suntree Music Festival. Musicians and performers are invited to join the Okotoks Music Drive from their own homes on May 24 from 1 p.m. to 3 p.m. (Photo submitted)

Musicians are bringing their talents to the community in the first-ever Okotoks Music Drive later this month.

Performers will play from their frontyards, porches, driveways or garages between 1 p.m. and 3 p.m. on May 24, to entertain their neighbours and the wider community. People who drive around town to find musicians are encouraged to bring food bank items to place in boxes that will be placed at the end of each performer’s property.

The idea first came from social media posts organizer Jessica DeCoste was seeing from her home province of Nova Scotia.

“People were doing these mini concerts on their frontyards or in their driveways or garages for the general public,” said DeCoste. “It didn’t have anything to do with raising money or anything, but it was a way to spread some cheer while everybody was sort of isolated and the musicians weren’t working so they wanted to play.”

She thought it would be something cool to bring to Okotoks, so she put out messages on the local garage sale Facebook group, as well as the Stone Soup Facebook page to see if anyone in the Cimarron area, where DeCoste lives, was doing anything like that already.

Soon the idea had morphed into a concept of hosting a socially-distanced free concert in the school field at St. Mary’s, and many people started to get excited about the idea and tagging their musically-inclined friends one the posts.

One of the people tagged was Andrea Siqueira, who together with her husband and their three children often perform in the community, notably at the Children’s Christmas Party and the Suntree Music Festival each year.

Siqueira said she wasn’t convinced it was the right idea at first, questioning the ability to maintain proper distancing. She slept on it, and in the morning an idea came to her and she called DeCoste to see what she thought of people across Okotoks playing from their own properties.

“Then they’re just entertaining their neighbours and if people want to drive by and listen to the music that’s great, and there will be music all over Okotoks, not just in this location,” said Siqueira.

She contacted Mayor Bill Robertson to see whether it was something the Town would approve, and after speaking to him and community event specialist Zach Adams, the group was given the green light to proceed so long as it ensured no more than 15 people would be in any one location at a time.

The Town was pleased to hear of a grassroots group putting together a safe community event, she said. In fact, Adams told her he’d been contemplating doing something similar next month.

“They were thinking about doing something like that but they’re excited we’re doing it and asked me if I would join them in June,” said Siqueira. “So this will be a good tester to see what we can do in June.”

DeCoste said at this point her biggest concern is out of her control – weather, which is always unpredictable. She said at least musicians are playing from their own homes and should be able to find sheltered areas to ensure the show goes on.

To-date there are more than five performances on the list and DeCoste said they hope to get more around the community to provide a wide array of entertainment for people. A map will be put together with addresses, times and genres once musicians have committed to the music drive, she said.

“I want to put the performers and their genre so people aren’t driving around all day trying to find something they actually want to listen to – not everybody wants to listen to country,” said DeCoste. “If you’re looking for classical, we’ve got a classical performer in Cimarron playing French horn. They can go to whichever performer they want to.”

The map should be available on Facebook before the event and anyone interested in checking out the performances or signing up to provide musical entertainment can find more information on the Okotoks Music Drive page on Facebook.