Here’s the church, here’s the steeple, open the doors and see all the musicians help feed the people. More than a dozen musicians from the Foothills are donating their talent for the 12th annual Okotoks Food Bank Christmas Concert Dec.
Dec 5, 2018 12:17 AM By: Bruce Campbell 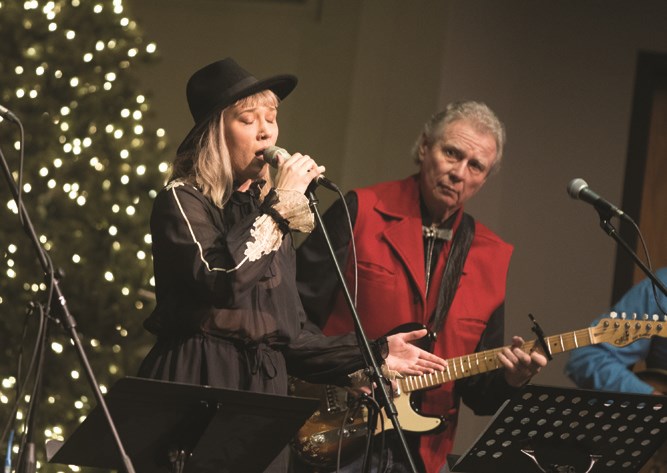 Here’s the church, here’s the steeple, open the doors and see all the musicians help feed the people. More than a dozen musicians from the Foothills are donating their talent for the 12th annual Okotoks Food Bank Christmas Concert Dec. 11-12 at the Evangelical Free Church. John Fraser, a performer and organizer for the concert, has a nice problem to have with the concert just six days away – he’s got more people wanting tickets than there are tickets. “It’s never happened before,” Fraser said on Thursday. “We have a committee that is a ball of fire. Also the word has gotten around that this is pretty good concert. I am not looking forward to the next 12 days – my phone has been ringing off the hook for tickets.” The concert has raised more than $160,000 for the Okotoks Food Bank, including the north of $40,000 in 2017. This year’s concert features Foothills mainstays like Tanya Ryan, Michela Sheedy, John and Lady C. Fraser, the Sheep River Bandits, Jay Burns, Haggis, the Travelling Mabels, George Canyon and others. “It’s a Christmas concert, so we ask them to play Christmas music,” Fraser said. “But they all seem to find a little different niche for them.” One of those unique spins on the concert will come from Taken By Sanity. “They are three young guys who do a lot of wild and crazy percussion – just tons and tons of energy,” Fraser said. “They got a standing ovation last year… It is quite different than anything else the others are doing.” The concert has given then-up-and-coming singers such as Ryan, Sheedy, Maddison Krebs and Samm Smith a chance to perform. “That was very deliberate since Day 1 to introduce some new younger talent to the audience and I think that is very much appreciated,” Fraser said. “I don’t believe Tanya Ryan was all that well-known when she first played with us. She is born for it [performing].” Ryan will bring a friend with her, the talented, while maybe not as well known, Lyndsay Butler, who grew up in the High River-Blackie area. However, there are also the well-known veterans, such as Longview’s The Travelling Mabels. “The Mabels have been part of this since the very beginning,” Fraser said. “This is going to be the new-revised Mabels.” The award-winning George Canyon was a surprise guest last year – no surprises this year, he’s on the poster and more than eager to participate. The Okotoks concert is a spin-off of sorts of the former Christmas performance in Black Diamond, which in its history included Ian Tyson, Mel Wilson, Amos Garrett and others. When the highly successful Black Diamond concerts started to lose momentum, Fraser – who performed in Black Diamond – decided to try one in Okotoks. “Ed Sands and I got involved with Renay Eng-Fisher and the first one we had was in the [Rotary] Performing Arts Centre and we outgrew that right away,” Fraser said. The show is now at the Okotoks Evangelical Free Church. “The church is a big supporter of the food bank to begin with – our first year there we had to move donated bags of food out of the way to pull it off,” Fraser said with a laugh. “It’s a wonderful venue. Padded seats, state-of-the-art stage system and big screens on both sides to show the words when we do the big sing-along at the end with George Canyon.” Every concert has its special moments. “I remember when Paul Rumbolt was with us in the early days, he would sing Christmas in the Trenches and O Holy Night half the audience had tears running down their cheeks,” Fraser said. “It can be very moving stuff and it is obviously an important time of the year.” Patrons are also welcomed to bring a food donation to the concert.