An Okotoks couple with a love for carolling is inviting others to help bring Christmas cheer to seniors the morning of Dec. 25.
Dec 20, 2017 12:00 AM By: Tammy Rollie 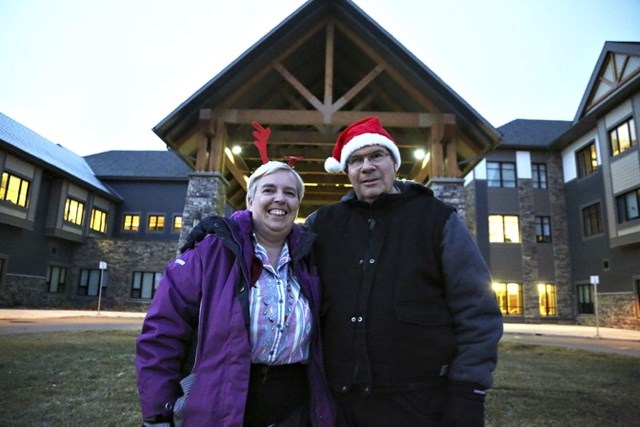 Grant Sullivan and Silvia Corsini are inviting the public to join them singing Christmas carols at Tudor Manor Christmas morning.

An Okotoks couple with a love for carolling is inviting others to help bring Christmas cheer to seniors the morning of Dec. 25.

Grant Sullivan and Silvia Corsini are continuing their tradition of inviting carollers of all ages and abilities to sing to Tudor Manor residents Christmas morning from 10 a.m. to noon.

“It’s a nice way to share Christmas,” said Corsini. “People really appreciate it, especially in places where people are by themselves.”

Corsini and Sullivan met more than 40 years ago while singing in a Montreal choir that visited a local hospital Christmas morning. When the choir disbanded, the two continued carolling.

“The first time I did it, it brought people to life,” said Sullivan. “It had a real feeling of Christmas. I think it’s what Jesus would have done on Christmas morning.”

The couple continued the tradition when they moved to Alberta, singing at the Rocky View Hospital in Calgary and Oilfields General Hospital in Black Diamond.

For the past five years, they have been brightening Christmas at the Tudor Manor.

“I used to volunteer at Tudor Manor and I thought that would be a nice place to carol,” she said. “I always loved seniors. My mom lived in a seniors’ place and they would tell their stories and had lovely lives.”

Sullivan said he loves the atmosphere at Tudor Manor with the carollers.

“Some people get up and sing,” he said. “They feel so happy that someone thought of them on Christmas morning.”

Sherry Little, the manor’s director of recreation therapy, said the tradition spreads the Christmas spirit to the residents.

“They are just so touched that these strangers want to share their Christmas morning,” she said. “It’s just the humanity, the spirit of Christmas that they bring to them.”

Little said many seniors feel Christmas is a time for children and young families, but that they still want to be remembered and have a special time.

Corsini and Sullivan offer that for them, she said.

“The residents join in and it’s definitely a feel good moment for them for sure,” she said, adding the carolling takes place in the lounge areas of the manor’s three levels. “They sometimes bring crafts and trinkets and hand those out. It’s even more special because the residents have a token from complete strangers who don’t know them but thought to make their Christmas so special.”

It’s an act of kindness the staff at Tudor Manor welcomes, Little said.

“Tudor Manor appreciates Silvia and Grant and their friends and crew for thinking of us and making us part of their annual Christmas tradition,” she said.

The couple will provide sheets with music to those in attendance.

Those interested in spending Christmas morning singing carols at Tudor Manor can call 403-995-9175 or email eggmancdn@hotmail.com