Beneath the Arch welcomes the brass

The five-piece Bow Valley Brass Ensemble can be termed a side project but it’s also a musical survival initiative for its leader Michael Eastep.
Jan 22, 2011 12:00 AM By: Okotoks Western Wheel Staff 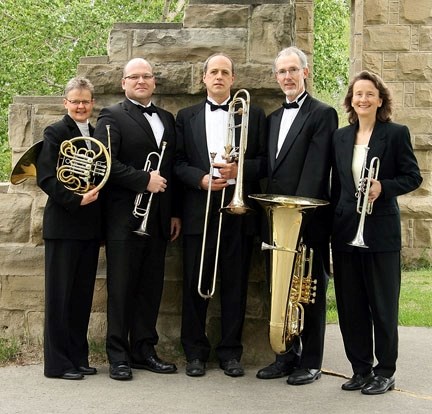 The five-piece Bow Valley Brass Ensemble can be termed a side project but it’s also a musical survival initiative for its leader Michael Eastep.

The 60-year-old tuba player has been a long time member of the Calgary Philharmonic Orchestra (CPO), but he created Bow Valley Brass Ensemble in 1983 as a means of ensuring he gets to perform the music for which he is truly passionate.

He explained he and the other members of the group, who also belong to the CPO, have found they need a musical alternative to keep from getting bogged down by the limitations of an orchestra.

“You need to do something different,” Eastep said. “You need to find something where you have more control over what you do. We love what we do in the orchestra, but we sit there and we take orders from somebody else. In a smaller group we get to choose exactly what we do including the music we get to perform.”

The Bow Valley Brass Ensemble will be exercising their musical freedom in a special 3 p.m. matinee performance at the Flare ‘n’ Derrick Community Hall in Turner Valley on Jan 16. This latest installment in the Beneath the Arch concert series offers another big benefit for the quintet Eastep explained.

“In a situation like the Turner Valley concert it gives us the opportunity to directly interact with an audience — something we don’t particularly get to do in the orchestra,” he said.

The ensemble features two trumpets, a trombone, a French horn and a tuba. In its initial years the membership was subject to turnover, but it soon stabilized with the same members (Eastep, Laurie Matiation, Richard Scholz, David Reid and Linda Brown) participating for more than 20 years.

For their Beneath the Arch show the quintet promises a wide selection of musical offerings, including a suite of Spanish music ranging from the early 1500’s in the first half of the show and great American popular music from the likes of Aaron Copland and George Gershwin in part two.

Calgary Flames fans may remember the Bow Valley Brass ensemble from their past stints performing the national anthem prior to puck drop. Eastep remembered that as a particularly amusing period in the group’s history.

“It was kind of a fun thing to do because we often had CPO concerts the same night,” he recalled. “We had to be back at the Jack Singer Concert Hall for an 8 p.m. concert so the Flames organization would send a stretch limo around to pick us up at the stage door and take us in the back way to the Saddledome where’d we play for the 7:30 p.m. hockey start then they’d whisk us right back in our tuxes and tails ready for the concert.”

Eastep mentioned sometimes the VIP treatment would continue with the members of the ensemble being able to return to the ‘Dome to watch the end of the game from the press box.

Those looking to catch the music and hockey loving Bow Valley Brass Ensemble this Sunday afternoon at 3 p.m. at the Flare ‘n’ Derrick in Turner Valley can go to www.beneaththearch.org for ticket information.