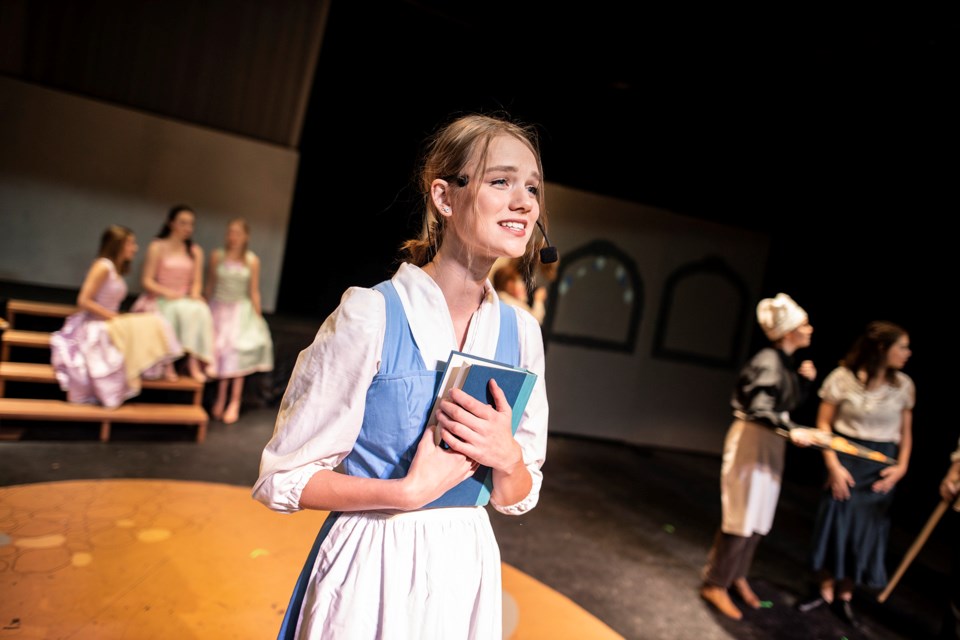 Samantha Hillmer plays Belle in a rehearsal on Nov. 27 for the Alberta High School of Fine Arts performance of Beauty and the Beast. (BRENT CALVER/Western Wheel)

Taking on roles that are beloved by children and adults won’t be a beast of burden for two actors in the Alberta High School of Fine Arts’ next production.

“It’s been an honour to be chosen to play Belle because she is so iconic and well-known in households everywhere,” said Grade 12 actor Karah Schmidtler. “I have dedicated myself to the role – this is the hardest I have worked in a production.”

Schmidtler plays Belle and Connor Smith has the lead as the Beast in the school’s production of Beauty and the Beast Dec. 6-14 at the Foothills Composite Theatre.

“She’s a very strong yet soft character, which is very interesting to play that different dynamic, I really like it,” said Schmidtler who feels she has some traits similar to Belle. “I feel I can be hard when I want to be and soft and gentle when I need to be.”

Schmidtler is also a member of the fine art school’s vocal ensemble – meaning she can handle the classic songs from the hit animated movie and stage production.

“It really helped, being in choir helps you sing properly,” she said.

Meanwhile, Smith is a veteran of monstrously-hard roles.

“I don’t like yelling, but I have to yell in this.”

He does look beastly.

“We just got a prosthetic nose and eyebrows, it is a very big costume and hot, but it is very beast-like,” Smith said.  “I enjoy playing him. He has so much emotion. He changes throughout, you start to see a softer side of him. The contrast from the start to the finish is fun to play.”

Of course, there’s more to the play than beauty and something that looks the Tasmanian devil from Bugs Bunny. There are 51 characters in the production, who could fill a kitchen and living room.

“We have (characters) from a napkin, to a plate, to a coatrack and operatic wardrobe – all these different inanimate objects,” said director Jessica Kelly. “As well as village people, old cronies…”

“Coming back to a program I graduated from — I met my husband through this program —  has been sort of full circle for me,” Kelly said. “Our guest choreographer, Erica Hendry, who owns Alberta Dance Academy, graduated with me and came in as a favour to me.”

All the work is worth it, said Smith, who likes the pressure of performing such a well-loved story.

“A lot of people are coming to see what they saw when they were younger – they might have saw it on VHS,” Smith said. “It’s nerve-wracking but exciting.

“I do think we are going to deliver.”