Reminder: Band Over the Moon to play in Okotoks

Over the Moon, Craig Bignell and Suzanne Levesque, have deep roots in the Foothills, Okotoks area
Nov 18, 2020 10:00 AM By: Bruce Campbell 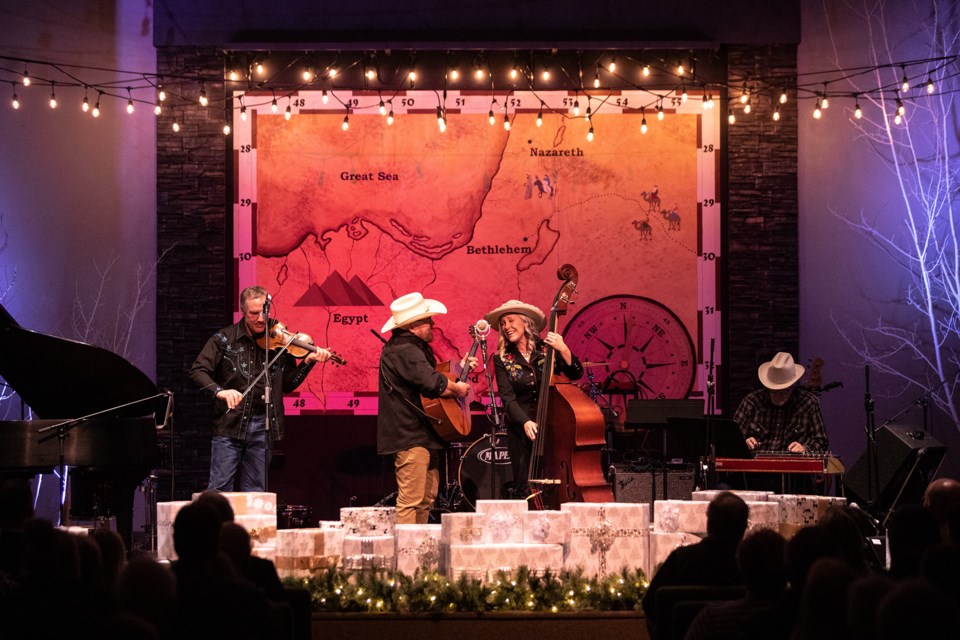 Over the Moon. Craig Bignell, second from left and Suzanne Levesque, sings Christmas for Cowboys during the 2019 Okotoks Food Bank Christmas Concert. The duo will play the RPAC@Home series on Nov. 18. (BRENT CALVER/Western Wheel)

A roots-folk duo is coming home for a concert - unfortunately it won’t have any friends in the audience.

Those friends will be watching at home when Over the Moon performs as part of the RPAC@Home livestream concert series Nov. 18 in Okotoks.

“It’s weird to perform to no one,” said Craig Bignell, who plays guitar and sings with his wife Suzanne Levesque. “We fool around and make our own fun, but it will be different for sure.”

It’s going to be a homecoming of sorts. Bignell and Levesque lived in the Longview area before recently moving to Chauvin, south of Lloydminster.

In fact, the RPAC was the first venue Over the Moon performed at approximately seven years ago.

As well, they were married seven years ago at Diamond Willow near Turner Valley and the reception was at the East Longview Hall, the site of many legendary concerts in the area.

Levesque is one of the original members — along with her mother Eva Levesque from Longview — of the Travelling Mabels.

Living in the Longview area, western music became as routine to Over the Moon as gazing at the glorious scenery.

“Some of our music is kind of Appalachian mountain sounding, but a lot of our music is starting to sound a little bit more swing, western swing — we call it cowbilly,” Bignell said.

Old Alberta Moon from its first album Moondancer has a Bob Wills and the Texas Playboys influence.

“Living on the ranch out there (near Longview) kind of influenced us to start writing that way,” Bignell said. “Being there with all those ranchers, real cowboys and cowgirls, helping with branding, the cowboy lifestyle you can’t get away from it – it influenced us.”

If you are a  musician and have called the Longview area home, the legendary Ian Tyson is a natural influence – especially when the Canadian music hall of famer is friends with the Levesque family and the Travelling Mabels.

Over the Moon’s first album Moondancer was named after a song written by Tyson.

Bignell first heard the Tyson single when the late Mel Wilson from High River picked up his guitar. Wilson once played in Tyson's band.

“Mel was playing it and I said ‘That’s a beautiful song we would love to record it,’ and he said: ‘That’s an Ian tune,’” said Bignell, as he did a spot-on imitation of Wilson’s Texas accent.

However, Wilson didn't recall the words and Bignell had to do some research to record the tune.

Over the Moon is in the midst of recording its newest album, tentatively titled Bluebird or more likely They Can’t Blackout the Moon.

And one of the cuts is Tyson’s classic Someday Soon --  which the duo was recording at their studio in Chauvin on Nov. 6.

“We are going to put an Ian Tyson tune on every one of our albums,” Bignell said. “I think Suzanne sings it better than anyone.

Over the Moon has played some small outdoor gigs during the summer – the majority outside as a duo in the southern Alberta area.

For the RPAC at home concert, Over the Moon hopes to invite some friends on stage, including fiddler Bruce Hoffman, now of High River, who once played in Mel Tillis’ band.

There is no cost to stream the Over the Moon concert at the RPAC. For details on how to watch the concert go to click here.