Artist brushing up on her livestock

Painter Jan Roenisch doesn’t have to go far for inspiration. She and her husband, Rich, own a half section of land between High River and Longview that’s well stocked with subjects waiting to be captured on canvas.
0
Jan 26, 2011 12:00 AM By: Okotoks Western Wheel Staff 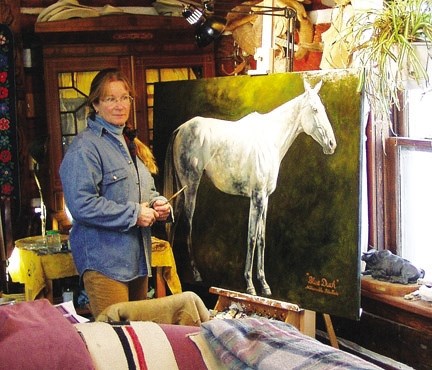 Foothills artist Jan Roenisch takes a step back while working on a painting of a horse named Blue Duck. Many of her animal paintings are now on display at the Longview Municipal Library.

Painter Jan Roenisch doesn’t have to go far for inspiration. She and her husband, Rich, own a half section of land between High River and Longview that’s well stocked with subjects waiting to be captured on canvas.

“We have eight pet longhorn steers that I’ve used a lot in my paintings,” she said. “We also have 20 horses. My husband and I used to play polo so we have all our old horses from doing that. We also have a stud horse that we raised. A lot of those horses show up in my paintings too.”

Roenisch explained she couldn’t really remember a time when she wasn’t involved in art. She started early on in life drawing and she later moved up to doing works in pen and ink, and then watercolours before eventually arriving in her current medium of oil painting.

The majority of her paintings are commission works with people often wanting her to create a portrait of one of their horses. A collection of the 60-year-old’s work is now on display at the Longview Municipal Library. The featured paintings include one image of a moose and another of a dog she owns dating back to when the beloved pooch was a puppy.

With Roenisch’s commissioned work she paints to her highest possible level of realism. However, recently she has been cultivating a modified style and her library exhibit reveals her new art.

“Recently, I’ve started doing these quicker, sort of sketchier, smaller paintings of many different kinds of animals,” she explained. “I’ll paint pretty much anything. I only tend to stay away from African animals and other things I am not familiar with.”

Self taught in the art of creating animal portraits, Roenisch has never taught painting classes or given seminars to other fledgling artists feeling under qualified for such a thing.

“I’ve never really talked to others about making art,” she said. “I still consider myself as someone who is still learning. I do, however, like looking at other’s people art because you always learn something every time you see something new.”

Painting is not Roenisch’s only artistic pursuit. She’s also greatly involved in her husband’s thriving business of producing bronze statues, including the day money trophies for the Calgary Stampede. One of Rich Roenisch’s most notable works, a large re-creation of a famous wolf attack, is prominently featured at the Bar U Ranch National Historical Site.

Jan Roenisch fills many roles in the bronze statue process including waxwork that precedes the metal figures and much of the finishing grinding. She explained this time of year is high season for the husband and wife’s statuary operation.

“We do a lot of polo trophies and other things,” she said. “We’ll do somewhere like 140 bronzes during the winter months.”

Squeezing in her horse and other animal paintings between the completions of bronze statues Roenisch shows no sign of slowing in either pursuit. Her paintings will remain on display at the library in Longview through the next few months.