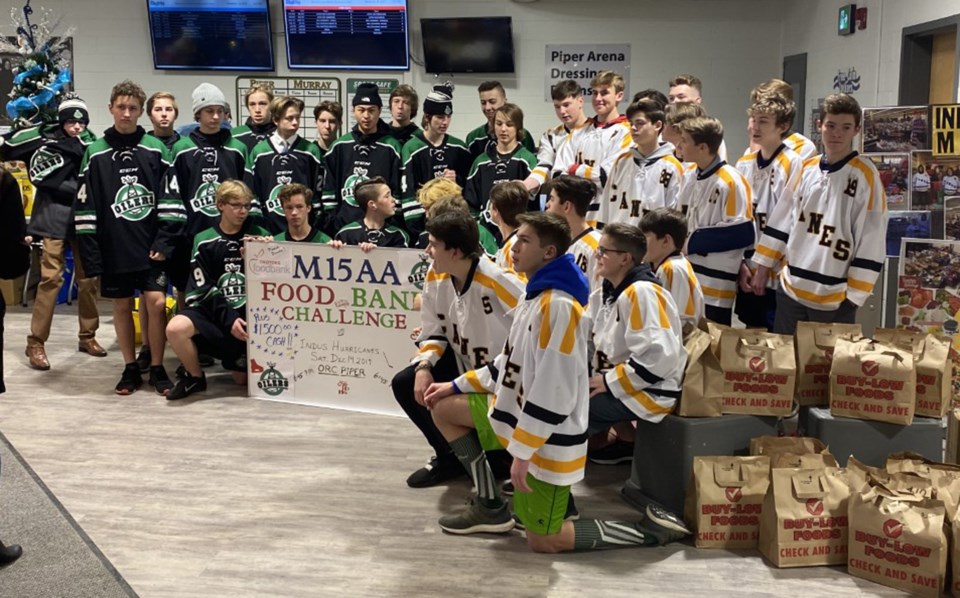 The Okotoks Oilers and the Indus Hurricanes held the M15 AA Food Bank Challenge On Dec. 14 at the Piper Arena to help their respective food banks in their communities. (Photo submitted)

The Indus Hurricanes and the Okotoks M15 AA Oilers are top two in the standings, because they are willing to take on a difficult challenge.

The two teams took on the challenge of feeding their respective communities with the M15AA Food Bank Challenge on Dec. 14 at the Piper Arena.

“We are 1 and 2 in the league, we seem to have close games with each other and based on the geography of being so close together, we decided to do a challenge to see who can bring in the most for the food banks,” said Daryl Stewart, a parent with the Oilers.

The bet was whoever lost —  the challenge, not the actual game — would donate $100 to the others food bank.

It was a tie — Indus brought in more food and Okotoks had more cash donations.

Okotoks Mayor Bill Robertson was one of those who decided who won.

“Myself and Pamela McLean of the Okotoks Food Bank thought how do you declare a winner? We decided the people were the winners.”

Both communities received the $100 and the generous donations.