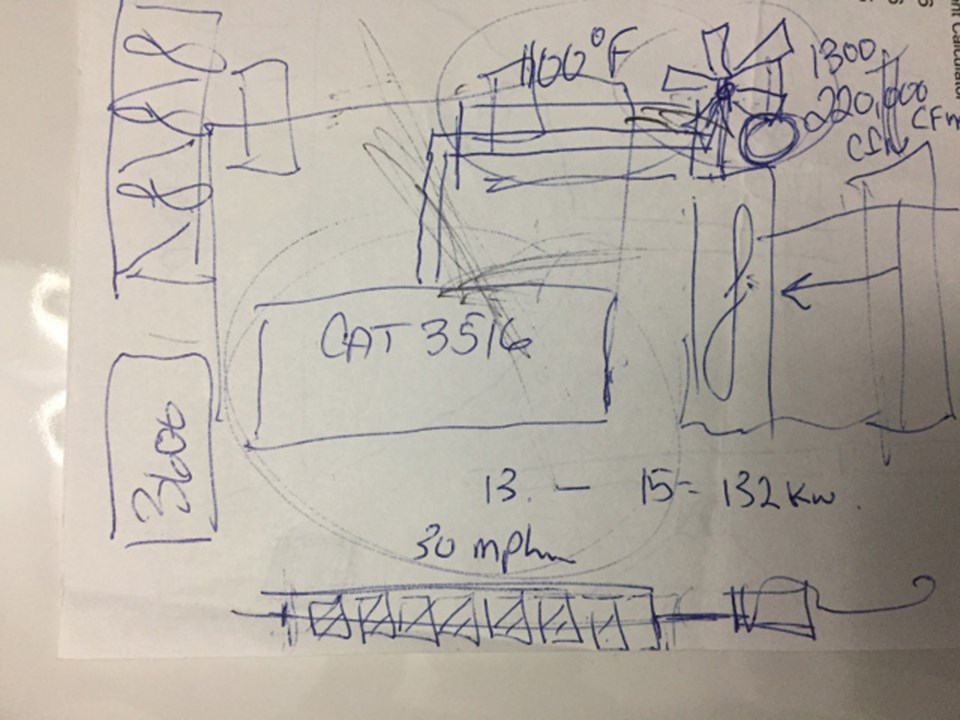 Photo submitted One of the doodles on which the idea for Okotoks-based CEGEN Green Energy System was created. The company won the 2019 Most Innovative Green Power Production Company (North America) at the Global Energy Oil & Gas Awards in May.

A drawing on a napkin at an Okotoks party resulted in an award-winning green company being established.

“What we are doing is taking waste air exhaust off of large coolers, HVACs, anything that is pushing air through a vent,” said Stephen Morgan, president and CEO of CEGEN. “We’re capturing that exhaust, pushing it through a proven technology (turbines) and we are generating green energy.”

He said for example a natural gas compressor needs about 5 kw/hour to operate.

“We can generate upwards of 25 to 30 kw/hour,” Morgan said. “So if you had five (compressor) units, you would need one CEGEN unit and you could be independent of the grid and just generate your own energy.”

CEGEN started in 2016 and the units are being designed in Pennsylvania and talks are in place with some major corporations in Alberta. The testing has been done and the company is expecting to install its first units, likely in Alberta,  in about eight weeks.

The program for the awards ceremony stated: “Today CEGEN aligns itself with the best companies in the market, collaborating with them from design and engineering right the way through to installation and service to create something they can be proud of and make the best possible use of.

“As a result of this client-focused approach the firm has worked to create a strengthening union between the Fossil and Green markets.”

All from an evening of banter and chuckles at an Okotoks home.

“I’m around these coolers all day and I started thinking there has to be a better way… I was finding that a lot of these companies were trying to find new green ways to produce energy on these sites, they were doing some thermal recovery and for a $30,000 or $40,000 investment and they were getting maybe 500 watts of power—turns on five light bulbs, it’s nothing,” Morgan said. 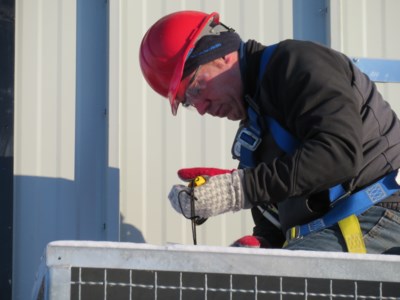 “We were talking about it and that’s when we started to sketch this out on a bunch of napkins and scraps of paper over some beers and glasses of wine.”

Far from a party-downer, the conversation has energized a small company in Okotoks.

The three partners are all from Okotoks and have known each other for more than a decade — at one point living on the same block.

“We are this great corps of friends,” Morgan said with a smile. “We had hot rods for a while, we did a lot of things together but this is the most exciting thing we have ever done.”

Exciting and busy. CEGEN is a significant side business for the partners, but that may change with the recent award; it might be more of a full-time gig.

The phones have been ringing ever since.

Morgan made a presentation to a major oil firm the day after CEGEN won the award, and he had put that information on the last page of his report almost as an afterthought.

“One of their people said: ‘Holy Smokes, you guys won this? This is significant, we want to work with you,’” Morgan said. “It’s been that type of reaction every since.

“It has given the credibility that we need. We have all the engineering, we have been vetted by PhDs, but this is the thing that is going to help us move forward.”

CEGEN had previously been nominated for awards for projects in Pennsylvania.

CEGEN is willing to dream, but dreams with a structured goal.

Which means they are moving forward — hey, maybe some day CEGEN can use that forward moving energy.

“We are looking at the kinetic energy of industrial movement and capturing that energy and turning whatever it is that is moving, into its own generators,” Morgan said. “It is so exciting. Think of an elevator going up or down, that movement is energy.”

He used the pump jacks in California as an example.

“Think of field and fields of pump jacks and each of those were able to generate 20kw of power, if you had a 1,000 on a site, you have a two-megawatt power plant and you haven’t added anything to the CO2 footprint and you have not changed the landscape one bit.

“These are exciting times.”

For more information go to cegengreen.com