Alberta Fish and Wildlife officials suspect the bear involved in the fatal attack on David Lertzman was a mature female grizzly, but so far the bruin has evaded all capture attempts.
May 13, 2021 1:45 PM By: Cathy Ellis 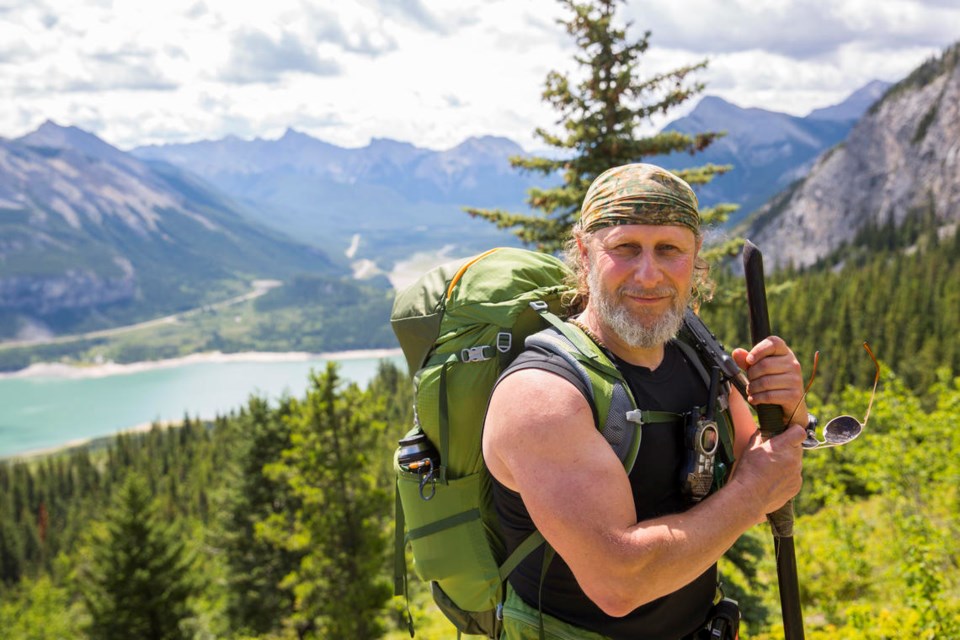 David Lertzman, 59, died when he was trail running and was attacked by a bear, leading to him fall over a high embankment. Photo courtesy of the University of Calgary

CANMORE – The wife of a 59-year-old former Canmore man killed in a bear attack in the Waiparous area last week says the bear attacked him from behind, sending him over a steep embankment to his death.

Alberta Fish and Wildlife officials suspect the bear involved was a mature female grizzly, but so far the bruin has evaded capture attempts.

Sarah Lertzman said David Lertzman, both former Canmore residents before moving to Waiparous, was trail running and seeking his deep connection with nature when the tragic incident occurred off Moss Trail near Waiparous Creek on Tuesday (May 4).

“He was attacked by a bear from behind and pushed off a very high embankment and was found near the river,” Sarah said on a Facebook post.

“The wounds were consistent with an instantaneous death, so he suffered very little. This was important for me to know.”

"It is not known whether the female grizzly was accompanied by cub(s), but based on evidence, a single bear was involved in the attack," she said.

Officers have been actively attempting to locate and trap the bear, but Lucila said there has been no sign of bear activity in the area over the past few days.

She said the area closure around the Waiparous Village trail system north of the village will remain closed for at least another two weeks as officers continue to monitor the area.

Lucila did not comment specifically on the potential fate of the bear – whether it will be allowed to remain living in its home range, or be relocated or destroyed as a result of the attack.

"Each situation is unique, and officers continue to investigate the incident to determine what may have occurred, so they can evaluate what actions need to be taken if the bear is located," she said.

"In general, fish and wildlife officers use the grizzly bear guidelines to determine how bears are managed and handled."

When David had not come home that evening, Sarah Lertzman said she had searched for him by herself for two hours, and walked right past the point of attack and saw no sign of it.

“I was looking for a man in trouble and not for a scene of something that had happened,” she said.

“By three in the morning we knew he was no longer with us and that it had been a bear attack.”

The Canmore community is sending an outpouring of love and respect for Lertzman, who worked as a senior instructor Haskayne School of Business at the University of Calgary.

A GoFundMe campaign has been set up to help Sarah and their two children Glen and Mela, aged nine and five.

The goal is to gather a general emergency relief fund for Sarah and family to use at their discretion in the short or long-term. At press time, $17,472 of the $50,000 had been raised.

According to organizer of the campaign Kari Woo, Lertzman was trail breaker, fierce scholar, gifted musician and singer/songwriter, an avid outdoorsman, and "defender and child of this Great Green Earth."

“David's impact on everyone he met required an embodied presence that is rare to meet,” she wrote on the GoFundMe page.

“He changed so many of our lives, inspired us to be better, to stand taller and take care of one another."

Sarah Lertzman thanked the larger community of friends “that so loves this great man.”

She said she was able to sit with him throughout the night on Wednesday, singing songs from the all traditions, especially her husband’s songs.

“We felt him transition fully to spirit between 3:30 and 5 this morning, the astrological Beltane, close to when he was born 60 years ago,” she wrote.

“We felt the bear spirit transition, too. It was as if they were wrapped around each other.”

About the Author: Cathy Ellis

Coal companies hope to move forward with mines in Alberta despite roadblocks
Jun 23, 2021 10:45 AM