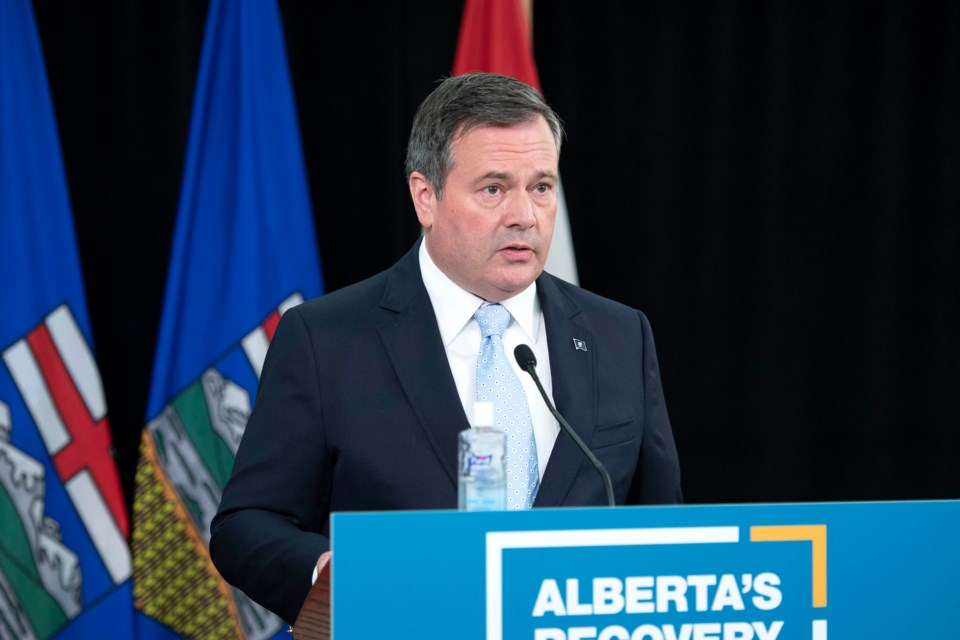 During a COVID-19 update Monday afternoon, Kenney said he will be announcing stronger health measures Tuesday. Specific details on those measures weren't available Monday, but cabinet members are set to meet Tuesday to finalize those measures.

“Right now, we are facing a very serious wave and we will take whatever measures are necessary to address it,” Kenney said.

Alberta also has record-high amount of people in intensive care right now with 154 people in the ICU, while another 658 are in the hospital.

Kenney implored Albertans to follow the current measures in place so the healthcare system can be protected.

“It is time to pull together, because what matters is what is happening in our healthcare system,” Kenney said.

“Whatever your personal views are about COVID-19 or the government, please put the healthcare system first.”

The premier said roughly 0.8 per cent of all diagnosed cases end up needing ICU care roughly 14 days after their diagnosis, which Kenney said has dropped from 1.4 per cent during the second wave thanks to vaccinations.

At this rate, the province will see 190 ICU cases on May 18, two weeks from Monday.

Although those number are high, Kenney said there is still capacity within the healthcare system, which has space for 425 staffed ICU beds.

Right now, Alberta has the highest rate of COVID-19 per capita in Canada and the United States and case numbers are continuing to climb. Alberta has 508 active cases per 100,000 people, which is double the next-highest rate in Ontario at 252.

The R value, the number of infections spread by each infected person, is sitting at 1.12 across the province, with Edmonton at 0.99, Calgary sitting at 1.16 and the rest of Alberta at 1.18.

As of Monday, 808 schools were on active alert or outbreak, which is about 33 per cent of schools in province.

The province has opened up vaccinations to teachers, childcare workers and all support staff to help protect educators in Alberta.

Starting Tuesday, staff can start booking appointments on May 4.

Kenney said the province estimates around 60 per cent of these workers may have been vaccinated in other phases of the roll-out.

“The glue that has kept learning going and our kids focused has been our teachers,” Kenney said.

“You work to keep school safe and keep students learning, even when going online and temporary closing was the last and best option.”

As of Monday, 1.64 million doses of vaccine have been given out across Alberta, meaning 37 per cent of the population over the age of 16 has gotten their first shot.

“That's more than one in every three people, which is a remarkable accomplishment,” Kenney said.

The province expects to open vaccinations up to the general public in an announcement later this week.

Kenney said one challenge his government is facing is the non-compliance of Albertans.

Both British Columbia and Saskatchewan have similar public health measures Alberta has right now, Kenney said, but their numbers are going down while Alberta's are climbing.

“There is a behaviour difference here that we have to take into account with every decision that we make,” Kenney said.

The premier said his government has been introducing strict measures during the pandemic, but the problem is that Albertans haven’t been following the rules, which he said was "incredibly frustrating."

“We have been acting for months, I'll remind you that there are entire categories of businesses that have been completely shut down for 14 months. It has been illegal for families to gather outside their own household for five, going on six, months in this province,” Kenney said.

“We have taken extraordinary measures.”

But Kenney said cases are rising in the province because of Albertans who don't follow the rules.

“At the end of the day, what it takes is broad public buy-in to the restrictions that are in place,” Kenney said.

The premier said Alberta may just have broad non-compliance, a younger population who are more likely to come down with COVID-19 and a higher labour force participation, which may all be impacting surging COVID-19 rates.

“There are a lot of factors in this. But the bottom line is, as we've said, we will do whatever it takes to protect the healthcare system. And that is why cabinet is discussing today and tomorrow, additional restrictions.

Kenney said he was angry to see a large group of Albertans gather in Bowden over the weekend for a rodeo, flouting the current health restrictions in the province.

"It is as astounding as it is aggravating that 14 months into this, with more than 2,000 deaths in Alberta alone, that we still have many people in the province who don't even believe that COVID-19 is real, who think it is some kind of big government conspiracy or hoax."

Grappling with how to press the virtual flesh, parties gear up for election showdown
May 9, 2021 10:15 AM