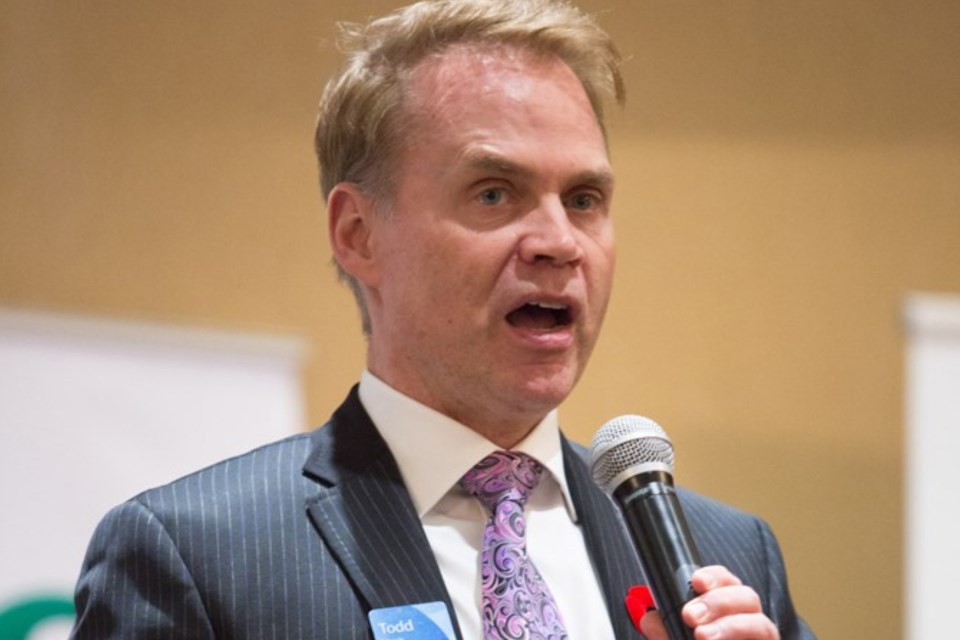 ATB Financial chief economist Todd Hirsch during the Power Up! 2018 Alberta Entrepreneur’s Conference at the Pomeroy Inn & Suites in Olds. His annual outlook and forecast was presented virtually this year. File photo/MVP Staff

The sectors with the most potential to grow and create new jobs as the post-COVID economy recovers are tech, agriculture and agri-foods, as well as renewable energy, says ATB Financial’s chief economist.

Todd Hirsch, who late in January virtually presented his annual economic outlook and forecast, said the second half of 2021 is expected to see growth as the vaccine rollout ramps up, although timelines remain uncertain as doses have not been delivered and administered en masse as swiftly as had originally been hoped.

But whether sooner or later, the economy will begin to recover, with a roughly three per cent growth in real GDP anticipated some time in the second half of 2021, he said.

However, the jobless rate is expected to remain high in a K-shaped economic recovery wherein higher income earners recover quickly while others such as service sector workers struggle to bounce back, he said.

And albeit at lower levels, the energy sector will also be more stable with the price per barrel seeing slight increases, he said.

Although oil and gas has in the past lead the charge during boom times, the economist identified three other sectors as boasting the most potential for growth.

The first, he said, is the technology and digital sector, which is technically not new for the province.

“But compared to a lot of other places like Waterloo or Vancouver or Austin, we’re still early days,” he said, adding this sector will continue to be a leader throughout the year ahead.

Second is agriculture and agri-foods, “which has always been a star performer,” he said.

Agri-foods, which could be considered manufacturing as the result of value added to agricultural products that are turned into food and beverages, have been trending upwards, he said.

“Food and beverage manufacturing has now equalled or surpassed the value of refined petroleum in Alberta,” he said.

And third is the renewable and clean energy technology sector, he said.

“Rightly or wrongly, we’ve developed a reputation, I think, outside of our province, as being a bit fossil fuel-oriented — a bit of a dinosaur when it comes to greenhouse gases,” he said.

“I think a lot of this is misplaced criticism. We see renewable energy growing very strongly in Alberta.”

The first wind energy farm was created in the province almost 30 years ago, he said.

“So, this isn’t even a new industry anymore,” he said, adding the renewable energy sector is maturing and seeing more growth and opportunities in other areas including geothermal, hydrogen production as well as clean energy technologies such as carbon capture and storage.

During his presentation, he also borrowed a metaphor from a British economist, Hazel Henderson, who using a layered cake as an example illustrated in 1982 how economies are built.

The market economy, more commonly known as the private sector, is represented by the top layer with all of the fancy toppings, he said.

“This is where most of us earn our income and have our livelihoods,” he said, adding technology, financial markets, resource extraction, entertainment, personal services all make up this sector.

“That’s the top layer. But it’s certainly not the only layer.”

Underneath it is the non-market economy, typically referred to as the public sector, which provides crucial necessities such as infrastructure, public education, universities, health care, roads and public transport, fire and police services, as well as parks and aspects of arts and culture.

“We generally don’t leave these up to the free market to provide,” he said.

For all of its importance, the market economy “really needs the support of the public sector,” he added.

“We need infrastructure, we need education and universities, we need health care, we need fire and police services,” he said.

“However, we also need the market economy to be doing well in order to pay for those services in the public sector.”

So there is a level of interdependence between the public and private sectors, he said.

Yet that’s still only half of the economic cake, so to speak. The third layer — the social economy — often gets overlooked, he said, referring to the network of family, friends, volunteers, public health and wellness, faith communities, charity, altruism, social organizations and the general need for a society and population to be in good health.

“These things play an extremely important foundational role on top of which the other layers of the economy are built,” he said.

“I think (the social economy) is going to become increasingly important in the 21st century,” he said.

When any part of the social economy starts to break down — the perfect example today being the pandemic — there is a destabilizing effect that ripples through the rest of the economy, he said.

The final layer of the cake — the bottom portion that supports everything else — is nature, or the planet, he said.

“The natural environment is at the base. Without fresh air and fresh water and resources that are in good shape, none of the rest of this is going to matter.”

It’s not uncommon for tensions to arise between the economy and the environment, he said.

“People will question, ‘Is a polar bear habitat more important than my ability to work and provide food and shelter for my dependents?’”

Those kinds of questions are impossible to answer if considering the layers from the perspective of importance, he said.

So, instead of looking at the issue through the lens of which layer is most important, Hirsch said another way to look at it is by thinking about foundations, and structuring it that way.

“We really need our natural environment to be in good shape and in balance in order to build on top the rest of those layers,” he said.

Communities must also be in good shape to act as a strong foundation for the non-market and market economies, he continued.

“However, when we think about policy, and often when we have debates about what we should do as a society, the order of priorities sometimes gets a bit mixed up.”

The private sector tends to override all others and becomes the primary focus, he said.

“I don’t think that this is unusual. There’s nothing evil or insidious about this. Naturally, most of us pay attention to that market economy, because this is where most of us derive our income and have our jobs,” he said, adding people generally speaking want the economy to grow and to provide new opportunities for young people coming out of school and post-secondary institutions.

“But you start to see what happens when we prioritize the market over everything else. Those other layers of the foundation, if they do not receive adequate priority, the cake starts to become unstable.”

And like a top-heavy layered cake that wasn’t carefully prepared with attention placed on a stable foundation, an economy can reach a tipping and risks toppling over, he said.

About the Author: Simon Ducatel

Simon Ducatel is the editor of the Sundre Round Up and a longtime columnist for other publications of Mountain View Publishing.
Read more