Parks Canada has issued a widespread cougar warning for the Town of Banff and surrounding area following a spike in cougar sightings, and a cougar that killed a deer and town and followed a man and his dog to within two metres.
Jan 12, 2021 9:45 AM By: Cathy Ellis 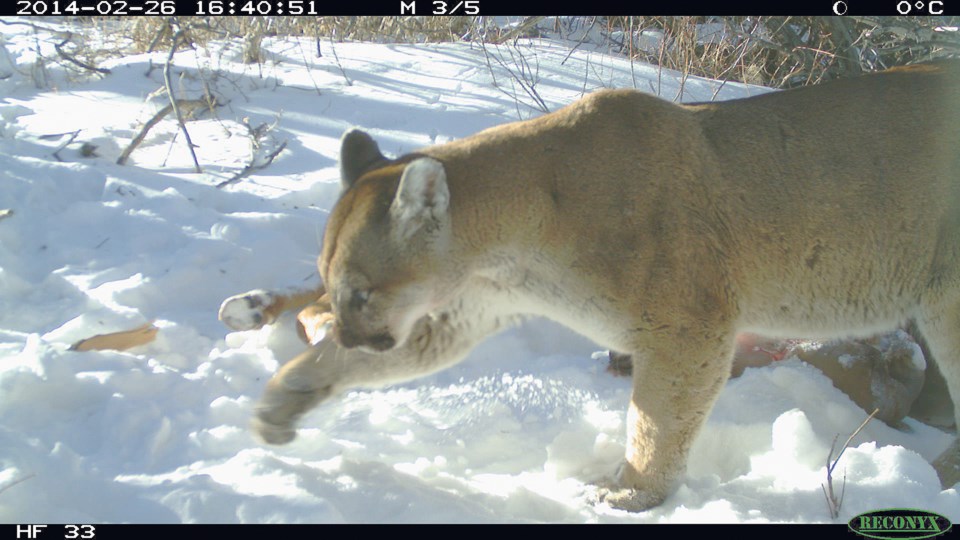 A cougar is seen on a trail cam. RMO FILE PHOTO

BANFF – A cougar that followed a man and his dog to within two metres before fleeing was believed to be back in town for a mule deer it had killed and stashed in a residential neighbourhood under the cover of darkness earlier that day.

The two incidents occurred on Sunday (Jan. 10), which followed a wave of cougar sightings over the previous week during daylight hours, prompted Parks Canada to issue a widespread cougar warning for the townsite and surrounding area.

Wildlife officials say a long-term resident and his mixed border-cross dog, which was on-leash, were on a trail near the pedestrian bridge on Buffalo Street when the cougar started following them at about 10 p.m. on Sunday.

Dan Rafla, a human-wildlife management specialist for Banff National Park, said the dog was the first to get wind of the cougar and then a "cougar sort of jumped out of the bush.”

“The cougar ended up following the individual for a short while. The individual did everything right, in that he collected his dog, he stood strong, he yelled at the cougar, waved his arms,” Rafla said.

“The cougar was focused and did continue to follow the individual and his dog. We’re uncertain if it was interested in the person or the dog, but most likely the dog, which was quite old,” he added.

“The guy backed up and the cougar got within a fairly close distance of two metres, but as he moved into an area that was more open and more lit up, the cougar ran off.”

The man called Banff dispatch immediately and wildlife experts were quick to the scene to investigate and search for any signs of the wild cat, or the possibility of another kill in the area.

Parks Canada believes it is likely the same cougar that killed a deer and cached it on a vacant lot on nearby Muskrat Street under the cover of darkness earlier that morning, or the previous night.

“When our staff went out to investigate, the deer was covered with dirt debris and there was indication that a cougar had killed the mule deer and covered it up,” Rafla said.

Upon its discovery, resource conservation staff removed the deer carcass and put a spot closure in place as a safety precaution should the cougar come back for the rest of its meal.

Unlike bears that will feed and usually stay with a carcass, Rafla said it’s not uncommon for cougars to feed on kill for a while before hiding it and returning later.

“We knew there was a good chance the cat would return to its kill, which it did do under the cover of darkness,” said Rafla, noting remote cameras installed as part of the temporary closure picked up images of the cougar at about 8:30 p.m.

About an hour-and-a-half later, at 10 p.m., was when the encounter with the man walking his dog occurred.

“That was relatively close to where the mule deer was killed, so it’s probably the same cat that was still around,” Rafla said.

“To some extent, it was likely an opportunistic situation where the cat had returned to where it killed the deer, but it wasn’t there, but it was still in the area.”

In the lead-up to these two events, there had been a spike in cougar sightings in and around the Banff townsite.

There were sightings at Tunnel Mountain near the Hoodoo Trail, Cave and Basin and one of a cougar walking by a patio of a home in Whiskey Creek-Marmot Crescent area – all areas on the periphery of town.

Based on tracking, Rafla said there is likely more than one cougar in town, including a mother and a kitten, and perhaps a young adult or juvenile.

“There had been several daytime cougar sightings in and around town. There were no behavioural concerns, they were just observations,” he said.

The fact that the cougars were seen in broad daylight, however, was a bit of a flag for wildlife managers.

“Typically, they’re so elusive and active at night and tend to keep under cover during the daytime,” Rafla said. “Obviously, we prefer them having avoidance behaviour with people.”

Rafla said he can’t stress enough the importance of residents and visitors immediately reporting any cougar sightings, at any time of the day or night, to Banff dispatch at 403-762-1470.

“The more we know, the more we can prevent bigger events from happening, so it’s so critical people call in real time if they see cougars or fresh tracks,” he said.

John Marriott, a wildlife photographer, has been doing extensive tracking of cougars in the Bow Valley this month as part of a cougar conservation project he’s involved in.

He has been backtracking cougars on Tunnel Mountain this past week, where he saw five or six different sets in recent days, though some were likely the same animal.

Marriott said cougars are using ski trails in the Tunnel Mountain campground and bike trails. The same goes for Canmore, he said, where he has tracked cougars on the Montane Traverse Trail area and near the Alpine Club of Canada clubhouse.

“One thing I find pretty amazing is how much the cats use our trails – they’re on ski trails and fat bike trails,” he said.

“They’re all around, using all these trails. The one on the Alpine Club was right on a trail for three kilometres,” he said.

The conservation project, which Marriott is doing through his non-profit Exposed Wildlife Conservancy and other non-profits in British Columbia, aims to raise awareness about cougars.

“This is an apex predator that coexists with us and we don’t even know it’s coexisting with us. I find that so fascinating. I think it’s very easy to find people who love wolves, who love grizzly bears, but there’s so few people who know anything about cats.”

Despite living in such close proximity to cougars, attacks on people are rare. Alberta’s only fatal cougar attack was in January 2001 when Frances Frost was killed while cross-country skiing near Lake Minnewanka.

To avoid an encounter with a cougar, or other dangerous wildlife, you should be prepared to:

If you see a cougar:

About the Author: Cathy Ellis