The cut helped even out an oversupply of milk that was forcing some farmers to dump their milk for lack of anywhere to send it.
Jun 8, 2020 1:45 PM By: Jennifer Henderson, Local Journalism Initiative reporter 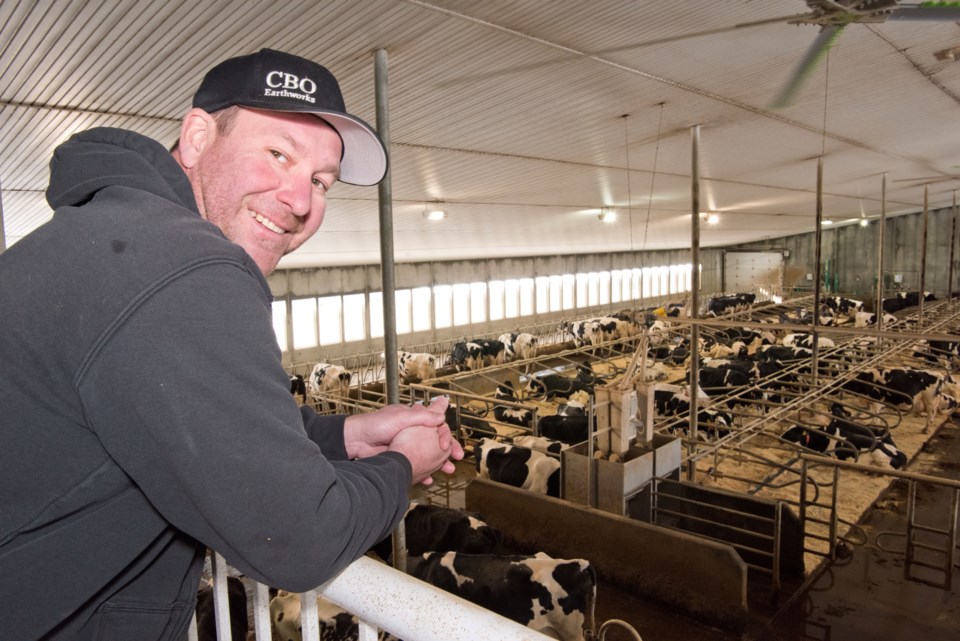 This is part of a series examining the ways the COVID-19 pandemic has changed Alberta agriculture, creating unprecedented challenges for farmers. Read our introduction to the series here.

Alberta dairy farmers produced about 3 million litres less of milk in April than usual as their industry adapted to lower demand brought on by the COVID-19 pandemic.

For Sturgeon County dairy farmers Jeff Nonay of Lakeside Dairy and Jason Crozier of Cheslen Dairies, that meant cutting their production by three per cent.

“It was a small decrease – nothing really substantial. It’s a decrease, though,” Crozier said, adding dairy isn’t an industry that operates on large margins.

“Nobody likes to take a cut – it’s hard for people to plan for that. All of a sudden, it happens … It kind of caught a lot of people off-guard, so it’s not something that anybody likes, but in the situation we’re in, everybody kind of understood it.”

The cut helped even out an oversupply of milk that was forcing some farmers to dump their milk for lack of anywhere to send it.

“(Dumping) is nothing that any farmer – any industry – wants to do. It’s just, these are such unprecedented times, we had no home for the milk,” said Karlee Conway, spokesperson for Alberta Milk.

Canada’s milk industry is regulated by a federal agriculture policy, commonly known as supply management, just like eggs and chickens. The system manages the supply, imports and pricing of products, helping farms to stay profitable and ensuring consumers can access these products at stable prices.

Supply management allows industries to set production quotas to avoid surpluses or shortages of their product.

For Alberta dairy farmers, that means less of a hit to their production than other industries have seen – such as potato farmers, who have been asked to cut back by 20 to 30 per cent.

From undersupply to oversupply

At the onset of the pandemic, as stay-at-home orders were issued, Alberta’s milk industry saw an initial uptick in demand as people started hoarding milk.

But that uptick died down as Albertans began to realize how much they actually needed.

Alberta wasn’t alone in seeing that drop – Conway added the entire globe decreased its milk consumption once the initial panic was over.

That’s when the milk industry changed its supply quota to match the new, lower demand, Conway said. In the meantime, the dairy industry worked to get its excess milk into the hands of those who needed it the most.

A wrench in the works

Typically, the dairy industry runs like a finely tuned machine: in the winter, before Christmas, farmers ramp up production of butter for baking, Crozier said. In the fall, when people go back to school, they sell more diary than usual because families are eating at home more. In the summers, people consume more ice cream.

COVID-19 has thrown a wrench into that, though, leaving the industry guessing.

“Something like this – everything just kind of goes out the window,” Crozier said.

“This is like nothing that’s ever happened before. Everybody’s habits have completely changed overnight. Everybody really has no clue what’s going to happen here in the next few months.”

Nonay says generally the change in demand was well-managed, although some milk producers would have felt the impacts more than others.

“As much as an industry can send signals and get people all on the same page, it worked really well. There would be a percentage of our producers that were really impacted for other reasons,” he said.

“It’s amplified for farms that were relying on leasing quota at this phase of their business, and it’s not like they were maybe long-term leasers – maybe they just built a new barn a year or two ago. So those are the ones that had a bigger impact.”

Conway said overall dairy farms will survive. She doesn’t expect the pandemic will force milk producers to go under.

The short production cycle of dairy also has its benefits. Nonay said milk production works month to month, unlike other industries that need to make production decisions a year out.

As dairy cows age out of the industry, though, farmers send their animals for slaughter. Conway said that aspect of dairy farming has been deeply impacted by the slowdown in beef production. Backlogs of slaughter-ready cattle have plagued the beef industry for months as slaughterhouses have had to close or reduce production due to outbreaks of COVID-19.

The industry is optimistic that when things start to reopen, demand will return.

“We’re really hoping that with this relaunch strategy, we can start seeing those sales and demand increase again,” Conway said.

The federal government provided some assistance, allowing producers to store more of their product by increasing the storage capacity of dairy products such as skim milk powder and cheese from $300 million to $500 million.

Nonay and Crozier say they want more government help to compete with their U.S. counterparts.

“Canada has a really weak food policy – there’s no real direction on it, and the pushback is, we overproduce so people feel food secure, because there’s a surplus of food exported from Canada,” Nonay said.

In the U.S., however, the food supply policy is to ensure there is abundant and affordable supply for residents. The U.S. normally subsidizes its agricultural sector on a much higher level than Canada does.

“They fund their farmers that way. Their support programs for agriculture in these times … are seven or eight times what our federal government is proposing.”

Crozier said Canada no longer offers good support for agriculture. The federal government allocated $252 million to the agricultural and food supply industry in early May, but that’s not enough, he said.

“To be honest, I think there’s very little to no support for ag anymore. I think it’s pretty frustrating.”

Jennifer Henderson covers rural Alberta matters under the Local Journalism Initiative, which is funded by the Government of Canada.