Personal trainer one for all ages

Best of the Foothills: Built Strong Athletics’ Sherrie Smith working with athletes from 8 to 85
Jul 31, 2019 3:00 PM By: Bruce Campbell 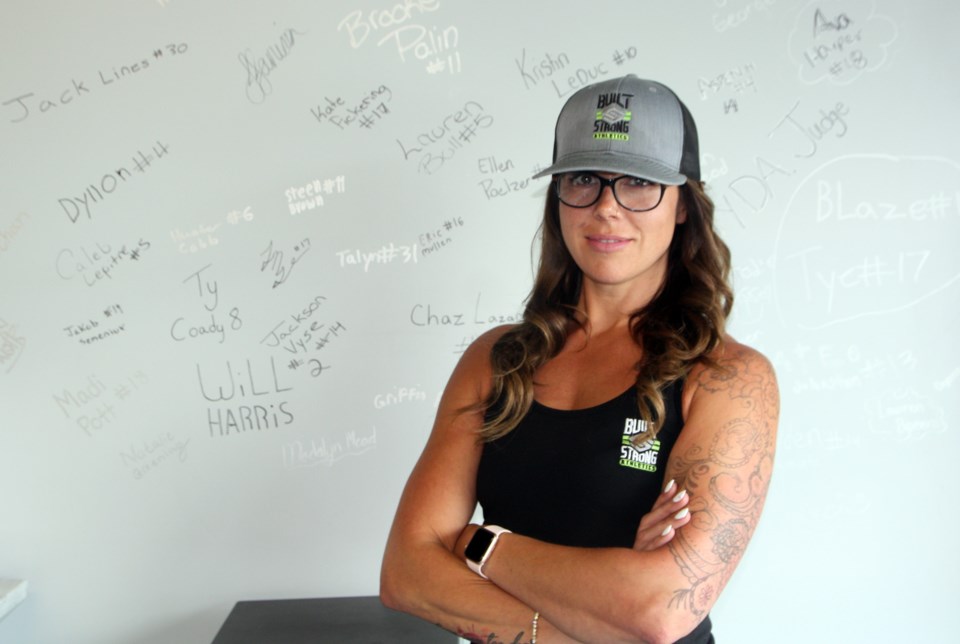 Built Strong Athletics personal trainer Sherrie Smith stands in front of a wall which have been signed by her and the facility’s clients. (Bruce Campbell/Western Wheel)

A personal trainer’s effort to help residents from pre-teens to seniors has been recognized by those in the Foothills community.

Sherrie Smith of Built Strong Athletics was the gold recipient for Best Personal Trainer in the 2019 Best of the Foothills Western Wheel Readers’ Choice Awards.

“I specialize in youth as well as seniors and athletic team development,” said Smith, a Comp grad. “Last year I was with the Okotoks Oilers Athletic Association. I was an on-bench trainer as well as their dryland athletic trainer.”

She worked with the boys Bantam AA, AAA, Midget AA, M15 as well as the Okotoks Midget Raiders girls squad.

Smith has been a personal trainer for seven years. Previously she had had worked as a reflexologist and holistic nutrition.

“That sparked my interest in health and fitness an I became a personal trainer,” she said.

She started at Built Strong Athletics in 2015.

“The learning curve and watching them thrive in this lifestyle is what I live for – watching them learn watching them neurologically process new things,” she said. “I like to start young so that they can process safely – so they can become functionally sound athletes.”

Her young athletes range from between eight and 18 years of age.

However, she doesn’t have an athlete who is too young doing deadlifts or bench presses.

“We don’t lift weights – everything for the children is kind of foundational-functional movement,” Smith said. “Body weight stuff, planks, forward motion, a lot of band work, muscle activation… Injury prevention is the most important thing at this point. Learning how to move our bodies and keep strong so that as we age we don’t get injured.”

Several of the exercises are geared to the clients’ interest, such as hockey.

“When an athlete initially comes in we do a full assessment on them,” Smith said. “Can they lunge, can they squat, can they activate their glutes properly, does their core activate properly.

And  how can we relate that to their sport.”

They also work on cardio and agility.

But Smith and Built Strong Athletics aren’t just about individual sports is about  allowing their clients to grow and enjoy physical activity.

She works with seniors at the Griffiths Centre in Black Diamond twice a week. She estimates the seniors range from 65 to 85.

“I love it,” she said. “Watching their ability to thrive. It is basically maintaining movement… You can change a lot in your life if you just keep moving properly.”

She also works with the seniors on their balance and their core strength – a key for any person.

Regardless of the age of her clients, watching them persevere and progress puts not only a smile on their faces, but hers as well.

“I love helping to change people’s lives,” Smith said. “Meeting new people and having an impact in a positive way, whether it is a youth athlete or one of my regular one-on-one clients, I think I bring them something new every single day.”

Several of her clients have signed a wall at Built Strong Athletics, recognizing Smith’s and the fitness facility’s effort.

Built Strong Athletics is owned by Jill Matthews, a prior recipient of Best of the Foothills readers survey.