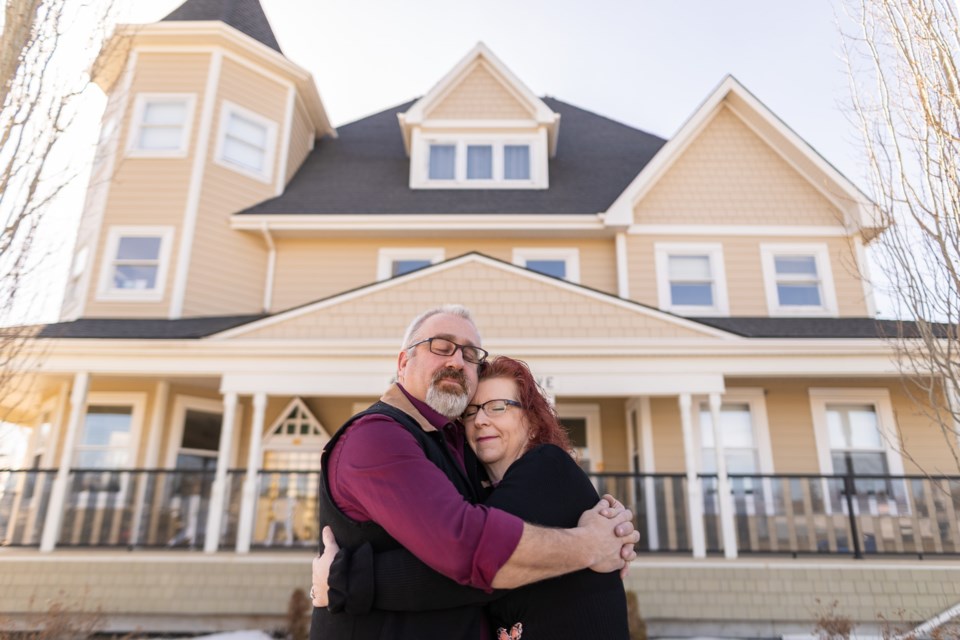 Candy and Ed Woodfine married each other at the Okotoks United Church on Nov. 28, 2020 with a limited ceremony and only a handful of immediate family and Rev. Julia Kimmett present. After 15 years together, the two could not wait any longer after their wedding was postponed due to the pandemic, but were able to conduct the ceremony safely and abiding by restrictions, with friends and family watching the ceremony via livestream.Brent Calver/OkotoksToday.ca

The pandemic didn’t stop two people in love during a dangerous time from tying the knot safely.

Candy and Ed Woodfine were married on Nov. 28 at the Okotoks United Church with a small handful of immediate relatives and the reverend to bear witness.

The couple had originally planned to be wed in Newfoundland in July, but that, as with many betrothals and other events, was put on hold in the first uncertain months of the pandemic.

They decided in November there was no time like the present and got in touch with Rev. Julia Kimmett at the Okotoks United Church, and the wedding went off without a hitch — or maybe one hitch, at least.

Much of the Woodfines’ large family couldn’t be present, including Candy’s daughter, who was eight months pregnant. Ed also had a son in Newfoundland unable to attend.

With the help of a tech-savvy son-in-law, the ceremony was livestreamed to loved ones, some of whom watched it on their phones from the front lawn of the church

Fifty families in total watched via the Internet.

Next came the first dance, but there was no possibility of a reception.

"You gotta have your first dance. We're in our 50s, and we just want to kind of keep some tradition," she said.

Kimmett, aware of this gap in arrangements, encouraged them to have their dance right there in the church.

“So we did our ceremony, we lit our candles, and we had our first dance there,” said Candy.

Ed was equally happy that they were able to have some sort of fanfare.

“I think it was really good,” he said. “It wasn’t how we wanted it; we were supposed to go and get married in my hometown, but we still managed to have the wedding we wanted with our family and our friends."

With most of their children and Candy’s mother living with them, they were able to celebrate at home after the ceremony

They decorated the basement, picked up Chinese food and cupcakes, and had a party at home.

There were a few surprises leading up to the festivities though.

While the good reverend agreed to marry them, her policy was that everyone had to take a marriage class, old or young.

Kimmett found the two, who are in their fifties, to be excellent students.

She was overjoyed to fulfil their wish.

"I'm so grateful and it was really neat to do it with them. I wanted to make it happen if I could," she added.

Ed said they intend to renew their vows in the church where they had initially planned to be wed.

Born in Newfoundland and transplanted to Alberta in the ‘90s, he only laughed when asked if there would be a celebration out east.

Precautions that can keep wedding guests safe during the pandemic
Mar 29, 2021 7:00 AM