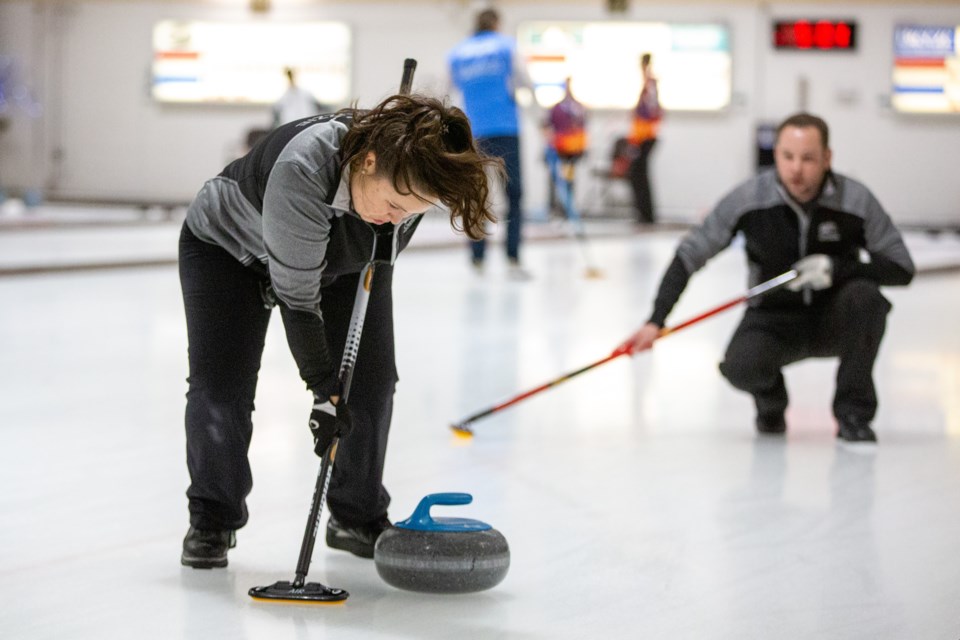 Canmore's Melanie Puzzie is cheered on by her partner Scott Moncur as she sweeps a rock into the house during the first match of the 2020 Qualico Mixed Doubles Classic at the Canmore Golf and Curling Club in 2020. EVAN BUHLER RMO PHOTO

CANMORE – Curling Canada is sticking with Canmore as host of its 2021 Canadian Mixed Curling Championship.

As the first Curling Canada championship being held in the mountain town, the local club is excited to be the host – again.

"We’re excited to have something to look forward to. Its been disappointing; all our bonspiels have been cancelled," said Dennis Graham, host committee co-chair, who's organizing the event alongside co-chair and general manager of CGCC, Darren Cooke.

"I think we’re all looking forward to being able to host some of the top players in Canada mixed and getting curling back on track like everything else."

We are thrilled to announce that Canmore will be hosting the 2021 Canadian Mixed Curling Championship this November!

Come November, there will be 14 teams competing – one representing every province and territory. The games will be played on CGCC's four sheets of ice inside the venue that offers an in-house viewing area, granted health regulations allow spectators to watch in-person.

Television and streaming coverage will be determined by Curling Canada at a later date.

The club accepted Curling Canada’s offer to host after last year’s mixed championship, scheduled for November in Canmore, was cancelled due COVID-19.

Given the circumstances, hosting in 2021 will likely be a better fit for the club, explained Graham.

“It would have been an event that would have to be different than we originally hoped for,” said Graham. “A big part of curling is the social aspect and if we did host it, we were probably looking at an event with zero spectators … a year delay might actually work out better for us.

"What will hopefully happen with the economy is it’ll be a little bit of a boost during the off-season, bringing in teams and tourism here."

It’s not new for Canmore to host major events as its grown into a Mecca for sporting events locally and internationally.

“Canmore will play as perfect hosts for the Canadian Mixed National Championship and will offer the best in both quality competition and sightseeing,” said Mitch Minken, chair of Curling Canada’s board of governors in a press release.

“This event is the perfect balance between athletic skill and embracing opportunities to interact and socialize with other curlers around the country in one of the most beautiful areas of Canada.”

It will be the first time Alberta has hosted the mixed championship since Calgary in 2008.

The winning team will represent Canada at the World Mixed Curling Championship in October 2022 in Aberdeen, Scotland.

About the Author: Jordan Small

Jordan Small joined the Outlook in 2014 and covers the vast world of sports in the Bow Valley. A Barrie, Ont. native, he also wrote for RMO's Mountain Guide section and the MD of Bighorn beat.
Read more