Melissa Lotholz continues to progress in her quest to go to her second Olympic games
Feb 2, 2021 2:45 PM By: Barry Kerton 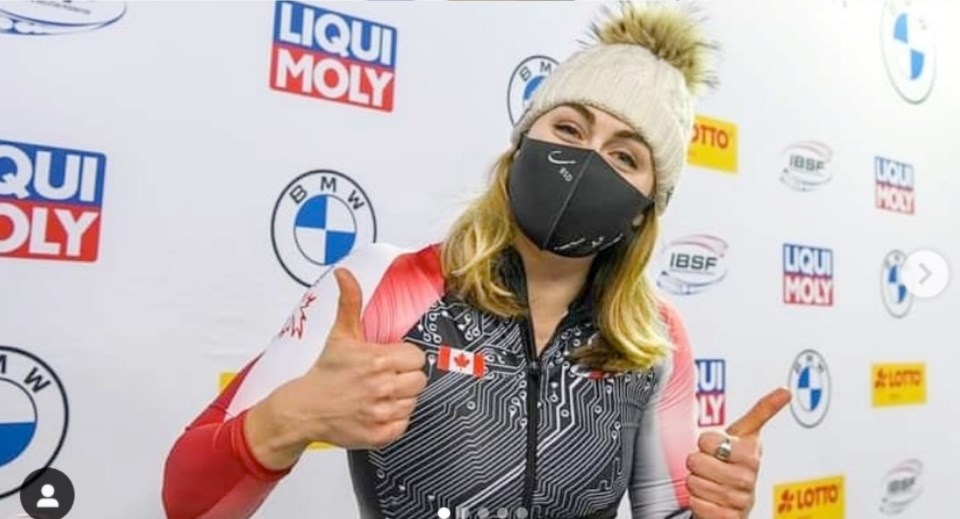 Melissa Lotholz gives a thumbs up after a run at a World Cup in Konigssee, Germany. She posted the picture to her Instagram.

BARRHEAD - Before the start of the 2020-2021 bobsleigh season, Melissa Lotholz thought she would be honing her piloting skills as part of Canada's development team on the North American Cup circuit.

For the last three years, Lotholz has been honing her piloting skills as part of Canada's development team after spending the better part of her first four years on the national team as a brakeman, mostly for Kaillie Humphries. Over that time, in addition to her Olympic appearance, she would accumulate 17 World Cup medals, including two World Championship silver medals. She also competed at the 2018 PyeongChang Winter Olympics, finishing in seventh place along with fellow Albertan Christine De Brun. Lotholz was her brakeman.

However, just before the Christmas break, she learned that she would be jetting off to Europe as part of Canada's contingent competing on the World Cup circuit. And it looks like the 28-year-old Barrhead native is making the most of that opportunity.

Recently, Lotholz finished fifth in her first race Jan. 9 in Altenburg, Germany, where she was paired with rookie-brakeman Niamh Haughey, who was competing in her first international race. The Altenburg race was part of the Europe Cup circuit.

A week later, Lotholz competed in a pair of events, the two-women bobsleigh and monobob in Innsbruck, Austria. In the two-women event, Lotholz and brakeman Catherine Mederios finished fourth.

In the monobob, Lotholz bested teammate Cynthia Appiah to take the gold medal.

Monobob is a new event, being first introduced two years ago. It will make its Olympic debut at the 2022 Bejing Winter Olympics. The addition is part of the International Olympic Committee's efforts to bring gender parity to the sport. For several Olympic games, male bobsledders have been able to compete in both the two and four-man events while women have been limited to the two-person event.

"After a crazy morning where you could say a snowstorm bested us all (the snowstorm delayed the start of the event by an hour) ...  I am happy to have laid down two consistent runs to win today," Lotholz said in an Instagram post.

On Jan. 23, in Königssee, Germany, Lotholz followed up with another strong performance in the monobob finishing fifth the Jan. 24 two-woman event.

After Lotholz’ first run, despite a strong start with the third quickest time, she found herself in eighth place.

In her second run, she improved her performance once again getting off to a strong start, she made up time in the second half of the course by posting the third quickest downtime.

Unfortunately, the next day Lotholz was in the two-women event and did not fare as well, finishing 15th with brakeman Erica Voss.

Although she was disappointed with the result, Lotholz said she was “overall pleased” with their performance.

Coming into the race weekend, we weren't sure how we would stack up against the best of the best and I was happy to see we were right there with them," she said. "Only having approximately 30 runs on this technical track compared to the 100s some of the more experienced drivers have, I am really proud of what we did and am excited for more to come as we continue to learn and gain valuable experience."

A week later Lotholz earned her second Monobob medal in the Monobob World Series earning bronze Jan. 30 in Igls, Austria with a two-run time of 1:51.22.

“As you develop as a pilot, consistency is what you zone in on more and more. When you’re learning you have one good run and one horrible one,” said Lotholz. “Today, to be able to improve on that second run [when in medal position] speaks to where my development is,”  she said to Bobsleigh Canada Skeleton.

About the Author: Barry Kerton

Barry Kerton is the managing editor of the Barrhead Leader, joining the paper in 2014. He covers news, municipal politics and sports.
Read more