“We just really wanted to create a place that served the food we liked to eat and cook in a non-pretentious environment,“ said Phillips. “We wanted a place that was fun and who we were and who we are, which is really what Northern Chicken is.”
Preston Hodgkinson, Google News Initiative May 12, 2021 3:18 PM

Nobody should be surprised to learn that the ongoing COVID-19 pandemic has been tough on restaurants across the province. Restrictions put in by the government has limited their ability to serve customers and has forced many to get creative with how they get their food out the door. This is especially true for locally owned businesses that don’t have the heavy corporate backers of larger chains.

In Edmonton, Northern Chicken is defying that trend, fending off the hardships of COVID-19 and staying one step ahead of the pandemic.

Owner Matt Phillips says Northern Chicken has been able to stay afloat due to a combination of intense community support and safe practices to keep their employees safe.

“We pulled the plug on dine-ins about two weeks before the restrictions came into effect because we started to get really worried about our staff, “ said Phillips, “We moved to take-out and delivery only and have pretty much stayed that way throughout the entire pandemic.

“We’ve been a strong believer that restaurants are a strong source of (COVID-19) spread and we wanted to make sure everybody was as safe as possible.”

Northern Chicken, located on the bustling 124 Street in central Edmonton, first opened up in November 2016 when Phillips joined up with his business partner, Andrew Cowan, to open up a fine-dining experience that anybody can take in. As an active member of the LGBTQ2S+ community, Phillips wants the restaurant to be as inclusive as possible.

“We just really wanted to create a place that served the food we liked to eat and cook in a non-pretentious environment,“ said Phillips. “We wanted a place that was fun and who we were and who we are, which is really what Northern Chicken is.”

This doesn’t only go for their customers, but their employees as well. Northern Chicken is unique in that they operate in a way that brings more attention to the people who work for them rather than the potential profit they bring in.

Celeste Tatlow, a server with Northern Chicken since January 2020 who identifies as non-binary, says they haven’t experienced a workplace quite like this one.

“I haven’t been able to work for a company like this, ever,” said Tatlow. “Most people just throw a rainbow on for Pride Month and call it good, but here we are allowed to be who we are, we are allowed to voice our opinions.”

“I am non-binary and here was the place that I actually got to start expressing that. I got to play around with my gender identity and have this space to feel comfortable enough to do that, which I think is really, really great.” 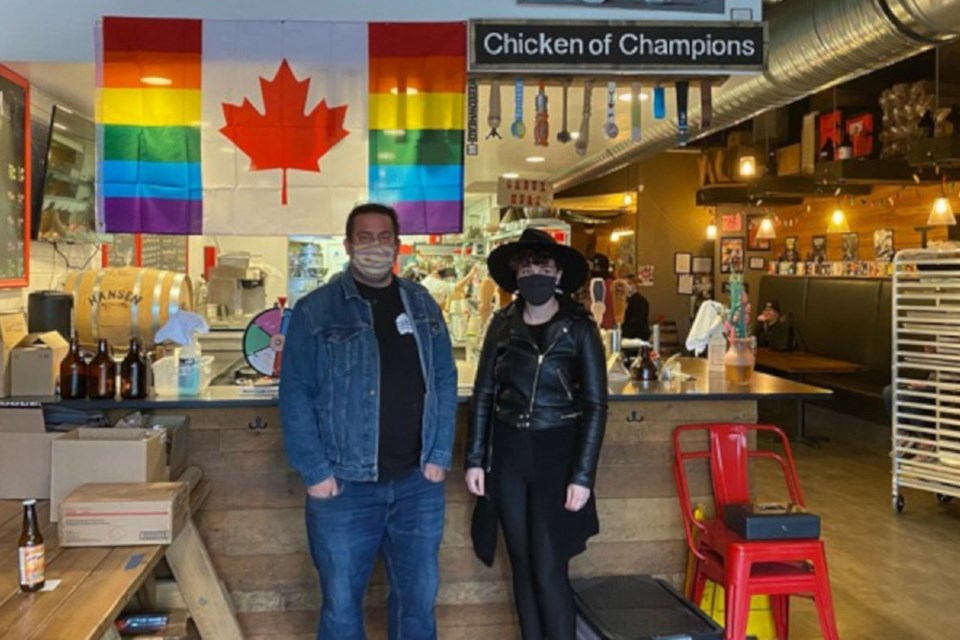 Along with their business philosophy has come a tidal wave of community support. They’ve been forced to shut down early on numerous occasions due to large volumes of orders wreaking havoc on their inventory – a problem Phillips is grateful to have in these uncertain times.

“I’m heavily involved in the restaurant community and the business community here in Edmonton, and to see so many people I know struggling and suffering without the support ... sometimes I feel guilty,” said Phillips, “It definitely makes the hardships of business a lot easier when you wake up in the morning and see messages of people that love you.”

Northern Chicken hasn’t shied away from giving back to the community, either. During the length of the pandemic, the restaurant has run a number of different promotions to help provide food to healthcare workers and teachers who were struggling. Their latest promotion includes a five-per-cent discount to anyone who comes in with proof of their COVID-19 vaccination.

“At the beginning of the pandemic, we were dropping off food for healthcare workers at the hospital ... The biggest week we did was 26 drops of between 15 to 20 employees per drop before AHS shut that down,” said Phillips. “We pivoted and worked with ATB to do a promotion where we gave 50 per cent off to healthcare workers for a weekend. It ended up feeding 968 different orders.”

The pandemic has obviously been tough on business, but the support of the community has helped keep Northern Chicken from sacrificing the quality of service it provides. Phillips says to keep an eye on the business as they are looking to add some exciting new partnerships down the line.

“We’re going to start a hot dog stand across the street probably in the next month and a half or so,” said Phillips, “There’s going to be a little food court of little food stands ... just (to) have some fun this summer in a safe environment.”

Preston Hodgkinson is a freelance writer and regular contributor to Great West Newspapers. This story was funded by the Google News Initiative.