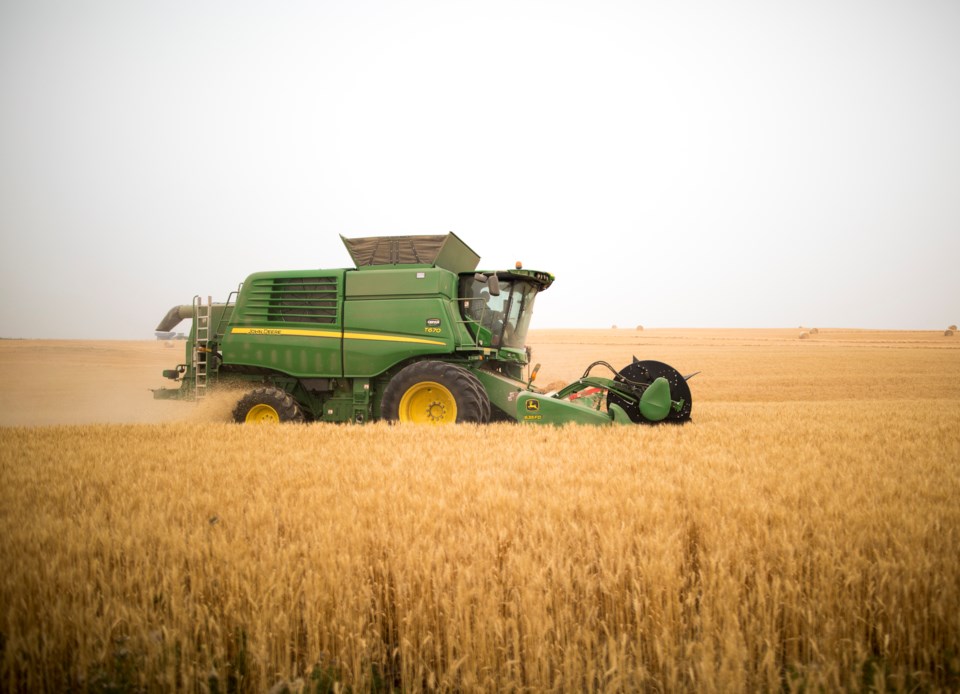 Foothills area farmers have no complaints after bountiful yields came off their crops this fall.

“I think for all the wrecks in society right now, agriculture has a pretty good glimmer of hope,” said Leroy Newman, who grows hay, wheat, barley, canola and peas near Gladys Ridge. “It’s not doom and gloom, we don’t need government subsidies – it’s good.”

While the pea crops was average, his wheat, barley and canola crops came out with high yields and high-grade with malt barley, #1 and #2 wheat, and #1 canola.

“Usually that’s rare to get #1 wheat and high yields, because usually you get weather,” said Newman.

Weather is usually the most unpredictable determining factor for crop growth and health in southern Alberta, he said, but this year there wasn’t much for devastating hail in the Foothills and “even the crappy crops were good.”

He had expressed some concern with hot, dry weather in July that could have had damaging effects on the crop, but Newman said it turns out that heat helped.

“It would have been a long fall if it wouldn’t have stopped growing so fast,” said Newman.

However, there could be future implications from this past summer. The subsoil is drier than it has been in many years, he said – even during drought years.

There hasn’t been a good rain since early to mid-July, and the snow came late in October. While that helped grow good crops and saw harvest completed without issue for most, he said it didn’t help the soil, and that could cause issues in the spring.

Fields were so dry this fall, there were a few fires started around the farming community during harvest as combines met stubble, he said.

“Everybody was packing their fire equipment to all the fields, worried about that situation,” said Newman. “Then we got a little precipitation and it took that fire risk away for the most part.”

On the other side of harvest, he said grain prices have rallied by about 20 per cent, which is good news for sales. He said that’s due in part of an increase in rail movement and fewer train delays.

Cattle pricing has stayed steady from 2019, he said.

“Overall I think our community and area, southern Alberta, it will be a really good year for everybody,” said Newman. “I think there’s a bright side in agriculture right now – for us, anyway.”

For Phil Rowland, a cattle rancher who grows hay and other cereal crops in the Mazeppa area, said there was nothing to complain about after this year’s harvest, which he had predicted mid-July would be bountiful.

“Harvest was awesome, it was a good year,” said Rowland. “Everything, all the ducks pretty much got in a row out in my world.”

He said yields were high for his grains, as well as feed and grass.

With mild fall weather he said all the crops came off in good shape.

“It could have been better – it always can be – but it was awesome,” said Rowland. “I’m quite happy. It’s always good to end on a positive note.”